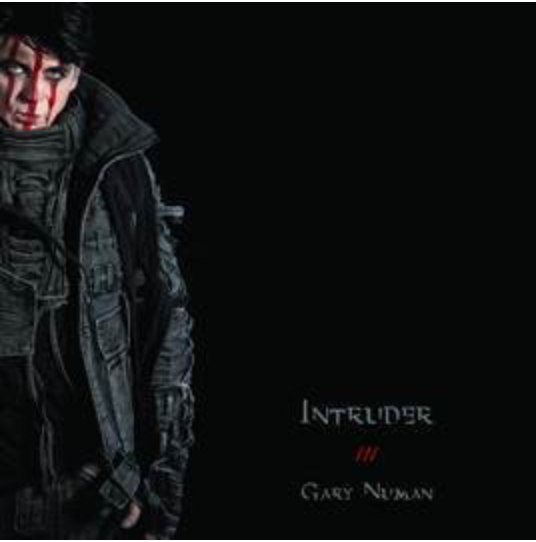 Before I begin this review, I think it’s only fair that I declare a possible conflict of interest here, in that I’ve been a fan of Gary Numan ever since I first heard Are Friends Electric in the summer of 1979, drifting from a small transistor radio resting on a garden wall, whilst on holiday in the Isle of Man with my mate Maddy during Wakes week.

My first gig was watching him at Manchester Apollo on his Teletour in 1980, and I got sacked from my local newsagents for doing the paper round in full silver make-up and a trilby. Bolton wasn’t ready for Numanoids in 1981.

Since then I’ve been to watch Numan many, many times and have even met him through my work as a photographer and writer, once spending a memorable few hours in his Essex house, along  with his wife Gemma, thankfully finding them both to be lovely.

And so yes, I think it only right that I lay my jumpsuit and red straps on the table before I write about his latest album, Intruder, to be released on May 21st.

I’d actually had the album to review for several weeks before I finally got round to listening to it, terrified that I wouldn’t like it, and then be forced into a situation where I had to be sincere but, in being so, having to write negatively about my teenage hero, who I know from interviews suffers plenty of self-doubt about his work.

Thankfully, I needn’t have worried, I think it’s brilliant.

I’d heard the four tracks from the album already released as singles, and read fans forums where there was criticism that he was just repeating Splinter and Savage, the albums from 2013 and 2017. Whilst there are connections, I feel Intruder is an album that has evolved, demonstrating real maturity, delivering perhaps his most emotional work yet, using masterful production and putting fresh air between this and the work of a decade ago.

Numan has said Intruder is about climate change from the planet’s point of view. “Intruder finds the Earth angry and hostile, and more than willing to fight back.” This album delivers an ocean’s worth of passion and anger, presenting songs overflowing with extraordinary energy, thundering across a barren landscape, proclaiming pain at the needless destruction, and a furious confusion at the mess caused by man. Numan, with this work, is an environmental beserker, creating a maze of rhythms and swirling synthesisers, each taking us into a fresh panorama of anguish at the prospect of unstoppable climate change .

The album begins with Betrayed, which has a deep religious quality, the dark vocal melding with deep synths and choral high points to establish an immediate sadness, a continuing cry of torment that echoes throughout each of the 12 songs. The next song, In The Gift, with its delicious Arabian themed chorus, conjures notions of Numan as an impassioned wise man, a traveller shouting down a corrupt king in his indulgent court, creating a sense of chaos that falls across the threatening background layers, orchestral in their ambition and execution.

The title track, Intruder, already released as a single, begins with a marching beat, like a giant on woodblocks, coming ever closer to your place of sanctuary, before delivering the lyrics

A blunt statement, in simple terms, of Numan’s feelings on corruption and human destruction.

The track Is This World Not Enough with its growling keyboards and echoing vocals, could be a call to arms from a mountain top, like Numan is inciting a group of warrior drummers, choreographed to strike fear into their enemy, stomping steadily towards their foe. And in The Chosen, with its heavy rhythmic start, showing us darkness from which emerges a sledgehammer of rage and energy, Numan’s conversational vocals are revealed, before returning us to a savage dust storm of gliding, electronic wonder.

There are moments of respite and reflection too, in songs such as Black Sun and The End of Dragons, which allow us to catch our breath before again charging into the darkness and despair of a ruined planet, expressed expertly through Ade Fenton’s tight, multi-layered production, in which no space is created by accident. I can’t wait to see it live, as it will have fans punching the air.

If I have one criticism, it’s that I couldn’t always hear the lyrics as clearly as I would have l liked, given the strong narrative, but this presents the opportunity to sit, as we all once did, reading the sleeve notes and words of each song.

This is an album as told by a storyteller, with nods and winks to his musical style from the 1980s, for those that know his work from that time. If you don’t much care for Numan’s dark, heavy sounds and pulsating beats, then this album isn’t for you. But for those that love this current version of Gary Numan, this is an album for headphones and closed eyes, a grand arena for the mind and imagination.

Simon Buckley / Not Quite Light