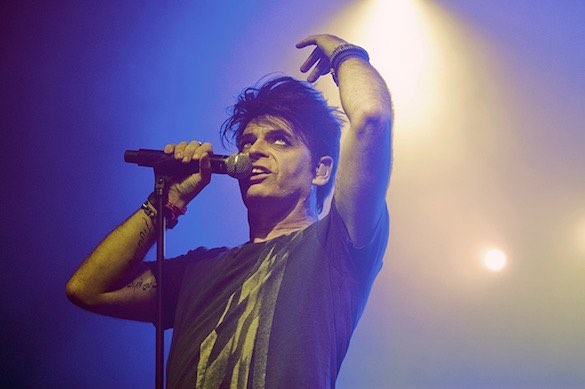 Gary Numan’s latest tour is now over. Louder Than War were lucky enough to be at one of the first shows, in Chester, and one of the last – this one in Holmfirth where recent convert to the cult of Numan, Andy Santiago, was knocked sideways by the genius of the man. We also have photos accompanying this piece taken from the Bournemouth gig, all © Tess Donohoe, which took place exactly 35 years after Gary’s iconic hit “Are Friends Electric?” topped the UK singles chart.

I have to confess at this early stage, I’m a relative newcomer to the world of the ‘Numanoid’ but I’ve always been well aware of his work, legacy and undisputable status as a true pioneer and far-reaching influence, not just in electronic music but throughout all genres.

My only real experience of Gary Numan until recently was randomly being on the same boat as him and his wife on the most Northerly part of the Norwegian coast, well into the Arctic Circle, a couple of years ago. 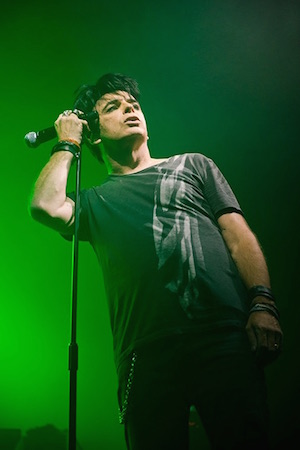 However, my recently discovered rabid interest in all things Numan is a direct result of fellow Louder Than War writer, Dom Walsh. Enjoying a pre-Satyricon pint in Manchester last year we were rather predictably discussing all things music when Dom asked “Have you heard the latest Numan album?”. I hadn’t, and Dom then enthused about the crushing darkness, paranoia and absolute heaviness it contained. My curiosity and interest was certainly gained so a couple of days later, I gave ‘Splinter – Songs from a Broken Mind’ a listen. Jesus, what an epiphany!!

Everything about this album ticked every box, in short, it’s an absolute masterpiece. So, the next logical step was to get to a Numan gig. It turned out I’d missed the first leg the UK ‘Splinter’ tour by a matter of weeks and Mr. Walsh gleefully informed me at every available opportunity just what an incredible event the Manchester date had been. I kept a close eye on Gary’s website and after a near miss with his Amsterdam gig in February that would have nicely tied in with my wedding anniversary, I finally got the news I was wanting. Intimate UK club tour. The magic words!!

After a feasibility study of the dates, I decided that the closest gig would be at the unlikely setting of Holmfirth, a picturesque West Yorkshire town, mainly known as the setting for an OAP-related, long running comedy show on the BBC. The venue was The Picturedrome, a former cinema with a capacity just shy of 700. I had been there previously to be bored senseless by Huddersfield’s Thrash Metal monkeys Evile a couple of years ago and liked the place so to go and see Numan in such a small and impressive venue was not to be sniffed at.

Driving down the M62 I was almost overdosing on expectancy, it’s not often these days I get to see bands I have never previously seen so to witness Gary Numan live for the very first time, certainly had the heart racing.

After picking up Mike, my companion for the night from Huddersfield we made the short journey to Holmfirth and entered the long since sold out venue just as the evening’s support band, Roman Remains, were wrapping up their set.

Down the front and awaiting Numan, the atmosphere was palpable and tense. ‘Army of Me’ by Bjork plays through the P.A. and then the sight of one of Numan’s road crew waving a Maglite at the sound desk signifies the long awaited moment is imminent. Chants of “NUMAN, NUMAN, NUMAN!” breakout and the stage is bathed in blue light and dry ice. I swear my heart is about to burst out of my ribcage. Industrial-sized rumblings and bass-heavy noises come from the deafening yet crystal clear sound system and slowly various members of Gary’s band take the stage.

Then it happens, some of the most vicious strobes I’ve ever witnessed act like a stun grenade and when the crowd recover from this retinal assault, clad in head to foot black, Gary Numan is there, staring down the crowd and looking like a coiled spring.

Opener ‘Resurrection’ bleeds into ‘I am Dust’ and the first line of “We were dust in a world of grim obsession” is drowned out by the fanatical crowd.

Classic Numan tracks such as ‘Metal’, ‘Films’ and ‘Down in the Park’ sit perfectly alongside the newer ‘Splinter’ material and are delivered in a genuinely icy, unfeelingly cold manner.

Numan throws himself around the stage, contorting, headbanging and seemingly clinging on to his mic stand as though his very life depended on it, a stunning performance that frontmen a fraction of his age could learn a lot from. Then there’s THAT voice. A voice that is so unique and so unmistakably Numan. 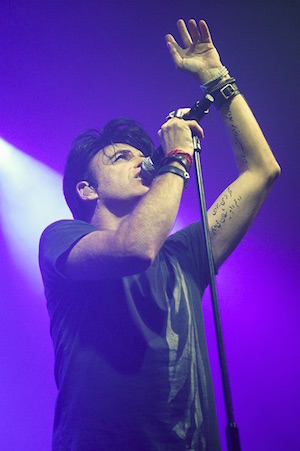 As the utterly soul-destroying and heartbreaking ‘Lost’ begins something I’ve never seen in nearly 30 years of gig-going happens. The girl stood next to me breaks down in floods of hysterical tears, her sobbing almost as loud as the song. Looking around the venue it became apparent she wasn’t alone. Many people were openly shedding tears whilst mouthing the words. Amazing to behold.

‘Lost’ slides straight into ‘Cars’ and as that most famous of keyboard riffs drops like a bomb, the tears are dried and the euphoric sing along from the crowd begins.

Throughout all of this, Numan remains distant and the only acknowledgement of the crowd is the occasional massive grin which I’m sure he was trying to suppress to keep in character as it were.

Following ‘Cars’ Gary straps on a guitar and a devastating ‘Pure’ is hammered out with more malice and aggression than I’ve seen in a long while, absolutely crushing and one of the highlights of an incredible gig for me.

‘Splinter’ follows and still everything is sounding amazing, tight and note perfect and when Numan fixes the crowd for the “I see you” refrain, it’s hard to be unimpressed.

“We’re the Unforgiven” and the stomping death rave of “Love Hurt Bleed” signify the set is coming to an end and for the past hour and twenty minutes, Numan hasn’t slowed down, the pace and intensity, relentless. After “A Prayer for The Unborn” Gary speaks to the crowd for the first time all night. “Thank You”, and they leave the stage.

The crowd goes into meltdown and the “Numan” chants breakout again. After a short while, the band return to the stage and Gary is trying to keep that grin in check again!

The inevitable duo of “I Die: You Die” and “Are ‘Friends’ Electric?” are given an airing. The latter in a stripped down form with the vocals almost whispered by Numan. Until that familiar bombast of the riff kicks in and then it’s heavy as all fuck.

‘My Last Day’ ends the encore and Numan allows himself a broad grin and once again thanks the crowd before leaving the stage.

The chanting and cheering show now signs of dying down so after a few minutes they return to the stage for what turns out to be an unplanned second encore in the form of ‘Absolution’ and then they are gone, leaving the little town of Holmfirth absolutely shell-shocked.

I’ve been to a lot of gigs over the years and that one was right up there, quite simply, Gary Numan was magnificent on every level and my only misgiving was why it had taken me so long to get on this whole Numan thing.

On the drive back to Huddersfield to drop Mike off he said “Can’t believe so many people worship Nine Inch Nails when Numan laid it all on a plate for Reznor”. A valid point and having seen both recently, I certainly know who my first choice out of the two would be. By a mile.

Many thanks go out to Josh Cooper at 9PR for his invaluable assistance.

All words by Andy Santiago. More writing by Andy on Louder Than War can be found at his author’s archive. Photos by Tess Donohoe whose website is here: tessdonohoe.com and who tweets as @tess_donohoe.