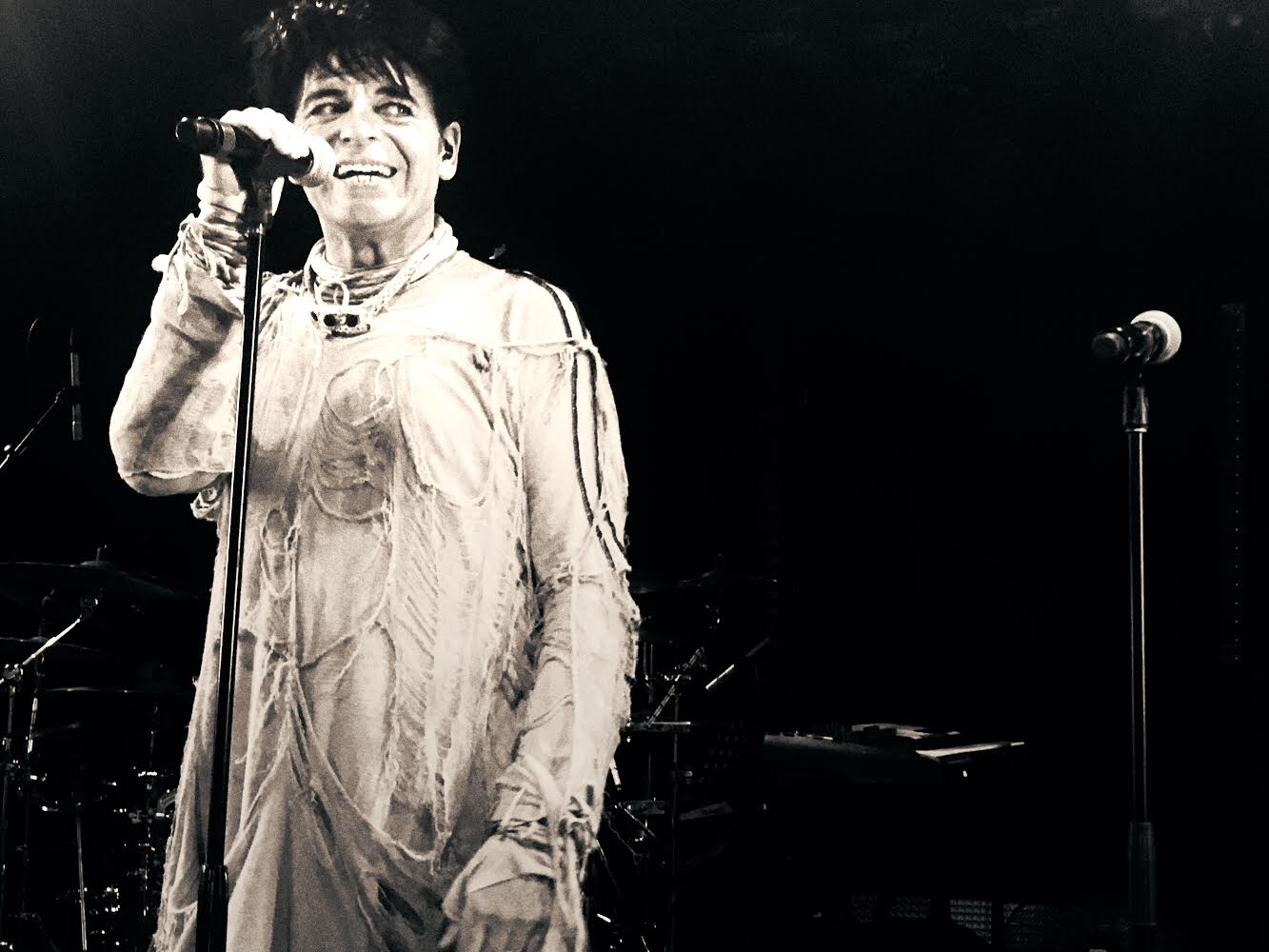 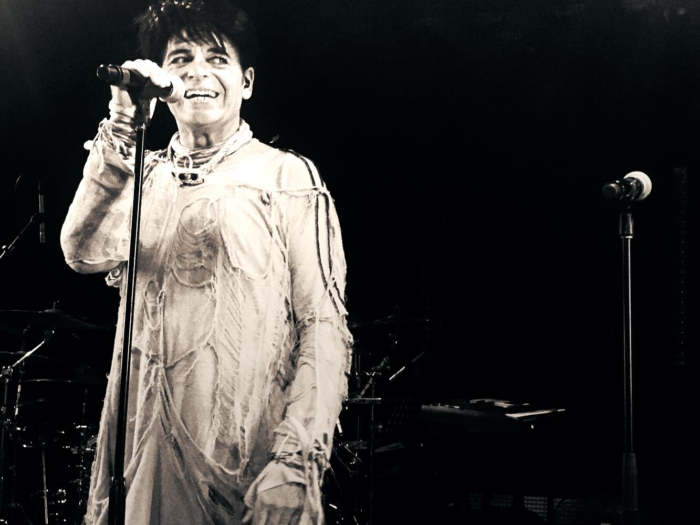 When I was a kid, there was a children’s television programme called Camberwick Green. It began with a simple tune and a rotating music box that slowly opened to reveal a solitary figure rising from within. The rest of the show then took you into this character’s world to reveal something of their everyday lives. At the end of the story the figure once more disappeared from our view, back into the box.

When I first heard Are Friend’s Electric in the summer of 1979, and became a lifelong fan, Gary Numan was a distant personality, allowing only brief glimpses into his life. His stage persona reinforced this, creating a futuristic, alien mystique that caused us followers to attach our own needs and reason to his apparent world.

I think of this as I’m sitting at my daughter’s kitchen table in Spain, ready to make the call for this interview. I’ve only ever seen Numan on stage, or on screen, emerging into the open when he chooses, and so I’m nervous after 39 years of listening to his music. I dial his American cell phone and it rings several times before connecting. The music box begins to turn.

“Hi, is that Gary?” I ask, hesitantly. “Sorry if the connection isn’t too good, I’m at my daughter’s in Spain”

“Well that’s weird cos you’re talking from Spain to this phone, which is American, so this call routes to America to connect to my phone, and then all the way to London where I’m actually standing with the phone in my hand, in my hotel room.”

I picture him standing alone, turning. The story has begun, and his laughter has already taken me into his everyday life.

Numan is about to begin a short tour, with the Skaparis Orchestra, and release a three track EP called The Fallen, concluding his work on the critically acclaimed Savage album, which reduced him to tears when it reached the top of the album charts. He’s also scheduled to do two “In Conversations With…” in January 2019.

Given he was 60 in March, I mention that he must have some life force within him, to keep up these energy levels.

He tells me that the tracks for the new EP were written specially, to avoid the usual way of extending an album’s life by “just chucking out remixes of the existing work”, and then we discuss the themes of Savage, which are about climate change.

I remind him of his early album Replicas, and the science fiction vision contained within those songs. Maybe he’s always been fascinated by what the world could become, with the mixture of human nature and technology?

“Yes, maybe so. I am interested in what’s going on now, and how that could manifest itself. I remember reading an article 30 odd years ago, and it said that the only thing that slows down technology is humans beings’ ability to grasp new technology as consumers. If human beings were smarter, then maybe we’d see an even greater change.”

A change for Numan is working with an orchestra, although those that know his music may wonder why those grand, filmic synths and collaborations with other musicians haven’t brought it about sooner?

“I’ve actually wanted to do it for years, but always thought it was a bit pretentious for people in the rock world to work with an orchestra. I always thought it had a hint of seeking validation, of writing “real music”, and working with an orchestra to prove it. So for those reasons I shied away from it a little bit. Anyway, I mentioned it in an interview to someone, and Simon Robertshaw, who worked with the Skaparis thing, got in touch and said “if you want to work with an orchestra, I’ve got one…” and that’s how it started. He orchestrated Ghost Nation, and that was amazing, and so we just carried on. So it’s been a year and a half working on it…”

I ask if it’s been an easy process?

“I’ve not done that much soul searching for it. The thrust of what we’re doing is still very much Savage driven. And then it was about how many songs we have left that we can do with the orchestra, ‘cos obviously there’s only so much time to work on them. So, do we go with the obvious ones we usually do on the tour, or maybe lose some of those and bring some in from the past…”

“That part is something I’ve struggled with from beginning to the end. Even to the point I was still changing my mind a few weeks ago, and Simon said “you absolutely can’t do this now. Whatever you’ve got we’re going to have to do that, as there is no more time to orchestrate, or to write the scores out.” And I was going “but but but…” I still didn’t know what I was doing. And that’s how I still feel. I have no idea if I’ve chosen the right songs or not. It’s been a bit stressful to be honest”

I ask him if he enjoys collaboration?

I suggest that shows a self-confidence, and a sense of curiosity.

He won’t be starting work on a new album until next February, he goes on to tell me.

“There are no ideas at the moment, but that’s deliberate. When one record ends I like there to be a real gap between that one and the next. If you just keep on writing in the studio, the music will just slowly evolve from one song into the next, and so I like that gap. By the time you start writing again you will have seen more films, read more books, seen new things, had more conversations. So it would seem to be easier to make a distinction in sound and style”

Talking of conversations, will he be nervous before he goes on stage next January, when he does his two “In Conversation With…” shows?

I suggest it won’t be, and he laughs “I hope not…”

“I have a sense of him. There are certain elements which are very much part of who I am. But since then I’ve had nearly 40 years of incredibly life challenging experiences, and it would be impossible not to have grown in various ways compared to who I was back then. A life time of being on stage, or doing this for a living, will shape you into being a different thing to how you used to be. But underneath all that I’ve still got Aspergers, and I still struggle to interact when I’m out. I still rely on Gemma to do the talking. Aspergers people are sometimes wrongly thought of as being self-centred, but actually it isn’t that. Talking about yourself, or something you know about is a safety net… you can talk. But if I weren’t talking about this, me, it would be aeroplanes, and if it wasn’t that I’d be fucked.”

I say I think the fans will love listening to him, especially ones from back in the day.

“It constantly surprises me when I’m out on my ‘meet and greets’ how my songs have resonated with people’s lives. It might not be the same experience, but the words still fit with their experience. It’s interesting, for instance, how many people have had problems with depression. So the Splinter record causes a lot to say ‘oh that happened to me…” There are relationships and feeling alone, or feeling disenfranchised, which is more to do with the earlier stuff. Even though I think I write from quite a peculiar perspective, ‘cos I have Aspergers, and see the world differently, it surprises me that it does seem to connect with people and their lives in ways I didn’t expect.”

Given he’s had over forty years in the music business, does he have a plan as he gets older?

“I don’t actually. Ha! My plan is just to keep on doing it until I can’t, it’s as simple as that. I’m surprisingly active for my age, and have stayed fit. But the older I get, there’s an increasing likelihood of an injury or an illness. I’m extraordinarily bendy for a man of my age, but sooner or later my back’s gonna go clunk during a gig, and that will be the end of that. At the moment I feel in as good a shape as I did when I was 21. Better if anything. More energy, more flexible, more confident onstage. I sing better now. So, at the moment, I can’t see any end in sight at all. But reality says in a few years I’ll be fucking seventy! At some point genetics will go “right that’s your lot”, and at that stage I guess I’ll sit down and start writing books.”

I suddenly find myself asking if death frightens him? There’s a silence, and the fan in me instantly regrets the question.

“It absolutely scares the shit out of me. Growing old scares the shit out of me. Every headache I get, every stomach ache I get, every little thing that isn’t perfectly functioning scares me. And I’m really worried about getting older. I’m terrified of illnesses and absolutely do not wanna die. I’m not at ease with it at all. In fact, so badly, that if I even think about it I start to get upset and panicky, and have to take a tablet to calm myself down. I’m properly not comfortable with it at all. And I think that might be partly why I still look the way I do, and do what I do, cos I’m in fucking denial…”

Luckily he laughs as he finishes talking, and I laugh too, before apologising for having caused him to perhaps be left feeling in need of pills to calm down. And then there’s another pause, and my daughter’s phone rings in the next room. The music box starts to turn again. It’s time for Mr.Numan to disappear, back inside the magic box where we think rock stars live, but leaving me grateful for having being allowed into his everyday life, even if just for a few minutes.

The Fallen EP is released on November 9th, 2019

The Savage tour with the Skaparis Orchestra begins on November 12th at St David’s Hall in Cardiff, with other dates in Manchester, Birmingham, Newcastle, London and Glasgow.

Simon Buckley is an artist based in Manchester, and a lifelong Numan fan.
@NotQuiteLight https://notquitelight.com