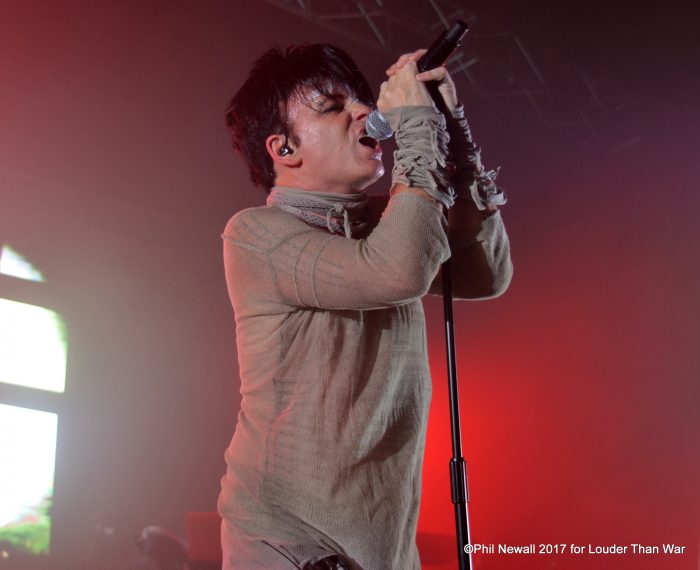 At the top of his game, and so good we have reviewed another date of the current Gary Numan tour (reviewed the London show here)

The future is very much now!

The remarkable Gary Numan, whose current album, ‘Savage (Songs From A Broken World)’, hit the charts at number 2 last week is on a career high. Not only are people buying his stuff again he is delivering it with a creative freedom, and writing the best stuff of his career. This UK tour is a celebration of the android who fell to earth and his created his own fascinating world with a huge and fierce cult following, and a music that somehow combines boundary breaking tech innovation with dystopian themes and dark matter melodies that are part Hans Zimmer and part classic Numan pop android.

In a mind melting audio visual display Gary Numan is still fast forwarding to the future whilst most of his contemporaries are grappling with their past. Few artists this deep into their career are writing their best stuff and owning the charts. Numan is almost unique in this creative curve. Musically miles ahead he’s literally overtaken the whole plethora of bands like Nine Inch Nails who were influenced by him and flavoured his own muse with their stylings but made it his own and then left them standing.

The teacher has left the pupils behind!

With a set that barely acknowledges the past apart from run through’ of Cars, Down In The Park and Are Friends Electric – versions that are warped and digitally twisted to fit in with his current sound – Numan is restless and creative and an artist at the top of his game. God knows how he manages it . Most musicians are so weighed down in their history and past at this stage of the game that an enjoyable romp through past glories is all that is needed but Numan is taking his devoted fan base on a trip. His last two albums have been, arguably, his best works and his determination to keep moving is bringing up the artistic dividend.

When he first appeared in the debris of punk he was the reptilian android who moved effortlessly in its slipstream making sense of Berlin Bowie for the wide eyed dreamers of suburbia. It was his mixture of alien cool and down to earth Suburban home made cool that made sense in the post punk battlefield where home made Terminators could roam. His image was all at once detached and DIY and somehow felt punk rock and he came armed with those brilliant pop songs that were also all at once weird, unsettling and yet perfect pop and with that emotional detachment that was so late seventies, an emotional detachment that was like shield of armour over the emotional seas that raged beneath. 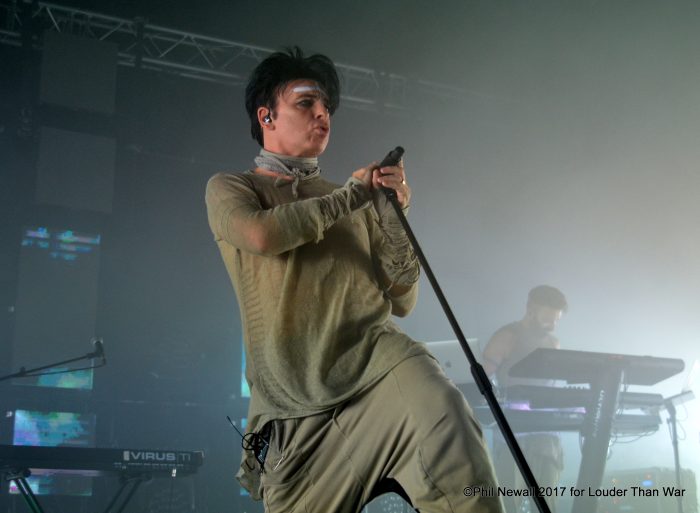 Thematically dark and dystopian, his music always caught a future fear and now that we live in a world that is full of Terminator style chaos and backdrops; Gary Numan is writing the soundtrack to a movie that no-one wants to get made called the news. Few artists capture the mood of the times so perfectly and so few do it this deep into the trip. His career renaissance has been remarkable and totally on his own terms. Gary Numan has never been a media pet but his musical influence and reach is wide ranging and can be judged by the embraces he gets from such diverse acts as The Sugerbabes and industrial music giants.

He could easily coast on these references but he’s already moved on to somewhere else and this whole gig is an exercise in contemporary. Numan himself looks great – barely unchanged since his heyday bar a mop of black hair, he twitches on the stage like a intergalactic Iggy Pop with his mind whirring to the micro details of his high voltage lights and sound show that is heavily built around the current Savage album with 6 songs including the stark vistas of the set opening Ghost Nation as well as the other darker adventures on the great current release.

The stage set is in the them of the current album with the band dressed in the guerilla gear and the backdrop film referencing the album cover, the light show is staggering – a whole rainbow of high octane colours that is quite dazzling and captures the mood swings and technical rush of the music which is delivered with a perfect live sound – crisp, loud and powerful. It’s stunningly executed and adds to the album’s sense of adventure with huge caverns of digital sound combining it with the guitar, bass and drum.

Numan himself as enigmatic as ever – part human and part detached with his distinctive vocal capturing this half man half android dichotomy. His music still feels like the future and his pioneering electronic pop such a key part of the music culture. This is a set of crafted brilliance that works on the dynamics of a rock band but still hums with binary machine like brilliance.

The songs from Savage add a mystique to the music, eastern melodies entwined with western tech, an ancient past and a future rush and still with that dynamic grinding power that is so key to the new Numan.

Rebooted and suited like Bladerunner 2049, this is Numan 2.049, still reinventing and still moving forward and creating his own agenda like a true artist.