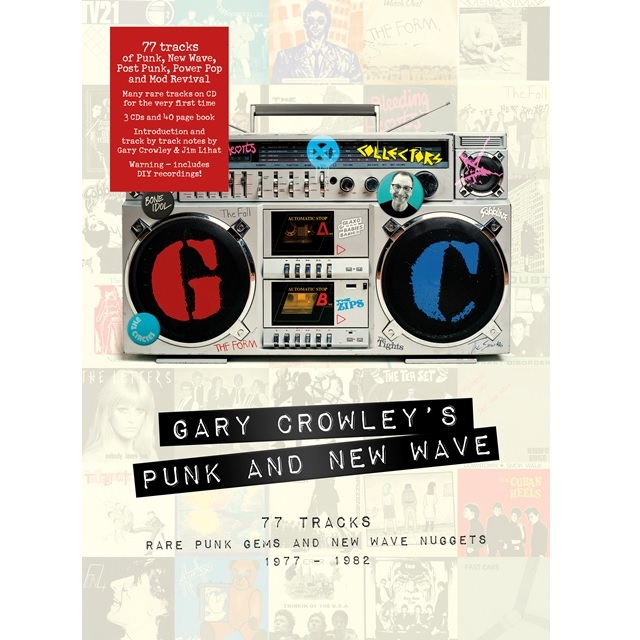 77 tracks of Punk, New Wave, Post Punk, Power Pop and Mod Revival released between 1977 – 1982 –  Some super-rare appearing for the first time on CD. . . Introduction and track by track notes by Gary Crowley and Jim Lahat.  Ged Babey tries to look on the positive side,,,

I love a good punk compilation.

And this is an interesting new addition…..  masses of stuff which you won’t find on ANY other collection.

No Big Names – No Pistols, Clash, Buzzcocks, Jam but some Classic stuff though – Emergency, Do The Robot, Young Savage … and a whole load of rare gems and obscure nuggets.

Maybe it covers too wide a timespan though , going from 1977 -1982 means it includes Punk (Good) AND  New Wave (Bad)  and some Mod (the Circles, New Hearts) and Post-punk (Glaxo Babies, the (early) Fall).  So, consequently…  it’s a bit of a funny old mixed bag to be honest.  To give Gary Crowley credit where it’s due, it is a fun and interesting compilation – but overall it does make you (or rather me) come to the conclusion that 77-82 WAS, without a shadow of a doubt – a Golden Age BUT there was a fair percentage of band-wagon-jumping, missing-the-point, fair-weather-new-wavers bringing out some pretty substandard work!  And this box includes the lot!

“Ever get the feeling you’ve been treated? …this is a mix from the heart chosen by yours truly, Gary Crowley, and my broadcasting better half/ buddy Jim Lahat.”.

“That is what Punk has always meant to us. It was about innovation and moving forward. We loved the look, the attitude, the edge and the back to basics approach. We were the audience and the bands were mostly the same age as us. The energy and excitement feeding from stage to fans and back again was palpable….. This box set is a testament to the vital role that Punk music, and all that it spawned, has played in each of our lives.”

Well, sorry Gary, but the likes of  The Form,  The Head,  Tinopeners,  The Plague,  The Crack,  The Smirks,  The Nice Men,  The Doubt, The Zips and the Kicks – not only had terrible, boring names, but didn’t really  have an original or inspiring idea in their heads, let alone their musical output.  Some of them did make a vaguely enjoyable racket though, on a limited budget….

This collection really could have been cut down to 45 (Revolutions) rather than 77 (hope I go to heaven) tracks and it would’ve been much more of album that would be on regular rotation in my household. (There is a huge irony, in that, in 2017 50-somethings like myself do the Sunday gardening or ironing to a soundtrack of rebellious punk rock!)

My other main gripe with this collection is the running order.  It is sequenced as if it were a radio show – and jumps from 77 to 81 to 79 rather than being in chronological order.  Putting Starjets – School Days and Suburban Studs – I Hate School next to each other is not really a good idea in my book…

On the positive side – there are some absolute crackers in this box, which you won’t find on any similar comp;  Scars peerless – All About You, Altered Images (still sounding brilliant!) – Dead Pop Stars, The Stiffs (should’ve been a massive hit) – Inside Out, The Carpettes (hammering, fabulous) – Small Wonder, The Skids (prescient, classic) – Charles, The Tights (under-rated classic) – Howard Hughes …. and the other great thing is that every part of the UK is represented – Wales, Northern Ireland, the West Country – balancing out the London/ Manchester bias of the Savage History of Punk.

The New Wave aka Powerpop side of this collection is what sadly weakens it. Basically a lot of the UK bands was simply not as good as the American counterparts (on the Beserkley label for example).  Maybe they were younger, which would explain it.

That said, The Things (Manchester band with John Maher on drums) The Teenage Filmstars (Ed Ball) and Bleeding Hearts (unknowns)  The Tea Set, (more Psych Art-punk) and Apartment (Bristol post-punks) contribute fantastic, 24 carat classics -which could be variously pigeonholed as Mod, psych, powerpop and so on.   It’s these which, in my opinion, make this collection an essential purchase…. along with the fact that there is a strong female representation from the Photos, Dolly Mixture, Mo-Dettes, Girls At Our Best, Lori and the Chameleons and Altered Images.

There are some highlights which are unintentionally hilarious as they are so-bad they’re genius – Tonight’s vein-bustingly manic ‘Drummer Man’… and the Plagues ‘In Love’ – which is the sound of a band just trying-too-hard.  The Automatics terrible piece of psuedo-punk ”When The Tanks Roll Over Poland Again’ is a track you’ll probably only play once.  Advertising’s Lipstick an example of the insidious influence of the Boomtown Rats ….

These are outweighed by the strategic positioning of cool, wonderful inclusions by the Only Ones ( NOT Another Girl for ONCE!)  the Nips ever-fabulous All The Time In The World,  Eater , Alternative TV and 999 providing a great three-in-a-row, Glaxo Babies ‘This Is Your Life’ (which I never knew Last Shadow Puppets had covered -with some style!). Peel favourite, The Quads – There Must Be Thousands is a massive memory-jerker and sounds phenomenal still.

I could go on… ( and usually do…) Despite having reservations and ‘slagging off’ some of this collection, I would still say it is worth the money and a pretty-essential purchase for anyone who lived and loved thru the era. It’s not perfect -but what is? My uncharacteristic touch of negativity is probably down to the fact that I would LOVE to have the opportunity to compile an album like this. Write the sleevenotes in my babbling prose, carefully work out the running order and share my love of the music…. so basically I’m just jealous of Crowley and his mate – who’ve done a pretty good job and no doubt had a lot of fun doing it.

Get it on I-Tunes