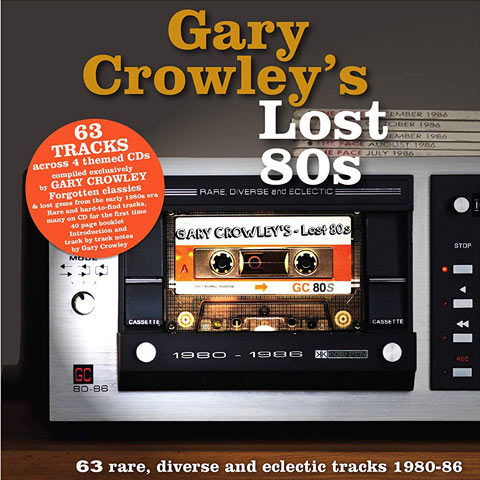 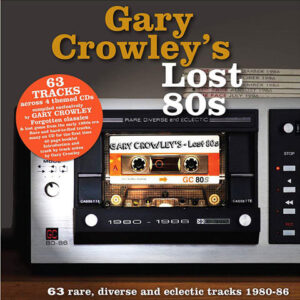 Mr Gary Crowley is the well-known music lover turned DJ who has ruled the waves since his voice hit the nation back in the early 1980’s on Capital Radio which made him the youngest DJ in the UK. In the same decade he would promote gigs of well known acts such as The Style Council and Wham!, and also presented TV programmes such as Fun Factory and Runaround. The 80’s have evidently left a lasting impression on young Crowley as he is about to unleash a pulsating new compilation of great lost songs of the era. Matt Mead investigates the release and interviews Gary Crowley exclusively for Louder Than War.

Being born in 1975 I was in pole position in the 80’s to live through and remember most of the music that was released. Some good, some not so good. The first ever single that I purchased was I Wanna’ Be a Winner by Brown Sauce and my second was Pete Townshend Let My Love Open The Door. My next forays into music were locking myself into my bedroom at my Mum’s and rubbing talcum powder across the bridge of my nose to then cross my arms in front of the mirror aka Adam Ant style before maturing into Our House period Madness, with the flat top haircut and flat cap to suit. Anyways, enough of my self-indulgence and onto the Lost 80’s compilation.

I confess that the majority of the songs that feature in this selection have passed me by, which is a breath of freshly smoke-machined air. Maybe that’s part of the plan with this release, as the vast majority of 80’s compilations dotting the isles of the supermarket shelves confess to unearth true gems, but if truth be told mostly feature songs we already know and have heard on repeat on commercial radio. What we have in our hands here is a group of songs plucked from the memory banks of Gary Crowley, all of which will turn those mind cogs back a decade or two to wearing a sweater Paul Weller Style Council over the shoulder fashion, or growing your haircut down one side of your face aka Phil Oakley style – you get the picture.

Highlights across the set include Prefab Sprout’s debut single, harmonica-lead Lions in my Own Garden, the twinkling guitar of Aztec Camera’s Pillar To Post, spring into action pop of Wham! A Ray Of Sunshine and a swooning cover of The Smith’s classic Please, Please, Please Let Me Get What I Want by The Dream Academy.  Spandau Ballet sound almost Britpop-ish with Confused, jerking punks Bush Tetras’ Too Many Creeps sounding like Wire, the anthemic upbeat pop splash of Makin’ Time Feels Like It’s Love and what sounds like the bass line from The Chemical Brothers Block Rockin Beats 23 Skidoo Coup.  There is also a plethora of remixes, extended remixes and an Intacontinentalballisticmix. The pick of the remixes include The Questions (who were signed to Paul Weller’s Solid Bond record label) Tuesday Sunshine (Jock Mix), Bananarama with their uptight and outasight Aie A Mwana [Afro Tribal Version] and lastly a fitting inclusion of the late Buzzcocks front man Pete Shelley with his debut solo single Homosapien [Dance Version]. Overall a fantastic compilation that is highly recommended to anyone that would like to relive their dayglow socks days or if you want an upbeat compilation to wipe any work day blues, this IS the album for you.

LTW: What was your first musical memory?

Gary: I remember as small child, whenever i was ill being given a farm set by my parents. Myself and my sister created this imaginary village and characters all with their own lives. It kept me amused for days and certainly fired my imagination!

The Pop music of the early 70’s initially (Slade, the Sweet, Bowie etc). I can remember my Auntie giving my sister, brother and myself each a transistor radio one Xmas as kids and it completely changed my life. It was literally glued to my ear and went everywhere with me.

Fast forward to the mid 70’s and through Tony Palmer’s excellent All You Need Is Love: The Story of Popular Music TV series i discovered the Beatles and got completely obsessed with them until Punk exploded in 1977 and that really turned my life upside down.

That period in your life (your mid-teens) is so important for a whole raft of reasons. And when Punk/ New Wave hit i knew I’d found my vocation and began writing about it in our school fanzine The Modern World and went onto interview the likes of The Clash, Sex Pistols, The Jam and Generation X for it.

What was the first single you purchased?

Money was tight at home growing up as a kid so at school my pals and myself would borrow each other’s records but the first record that i actually bought with my own pocket money was Status Quo’s single Rain quickly followed by Teenage Depression by Eddie & Hot Rods in late 1976.

How did you first get involved in Radio Dj’ing?

A lovely fella called Jeff Griffin at Radio 1 asked me to MC a show he produced called In Concert and i subsequently got to introduce the likes of the Dexys, the Jam, Depeche Mode, Talk Talk and U2. I was 18 at the time.

A year or so later an equally lovely fella at Capital Radio called Tony Hale gave me my first radio show which i called the Tuesday Club. I was 19 then and playing everything from Aztec Camera to the Style Council to the Pale Fountains to Grandmaster Flash via Defunkt and Pigbag and Wham and the Bush Tetras and Chic and all stops in between. Exciting times.

Was it from being on the radio that you would get to hear a lot of music that you probably would never have heard without this as a job? Were you open to listen to anything and everything?

I’ve always had catholic taste in music. So if it’s good I’ll play it. Within reason though! Most what’s termed Heavy Metal leaves me personally cold. And a lot of Country too.

Did you have a choice and your own process of what you would play on your radio shows?

Always. Right from the beginning. When i was told i was getting my own show my producer (Tony Hale) assured me that the playlist would be entirely down to me. And that’s something that I’ve been incredibly lucky to enjoy over the years.

Did you have any influences that would point you in the right direction to listen to various new music?

Radio titans like John Peel and the late great Peter Young were both early important influences to me. For their integrity and commitment as well as their individual presentation skills and their infectious, enduring passion for New Music.

John Kennedy at Radio X is another presenter I’ve always greatly admired for those same attributes.

Fast forward to this new compilation. Where did the idea come from for the compilation?

It seemed like the natural progression after our well received GC’s Punk and New Wave boxed set. And (as we attempted to do with that collection), I’ve tried to mix it up with this boxed set and avoid the usual ‘classic anthems’ and for go for a slightly quirkier but hopefully vital selection.

The early 80’s was a period where Pop as i remember retained a cutting edge. I (as my friends were) was listening to a potpourri of Guitar bands as well as Alternative Dance and Funky/ early Rap stuff that was beginning to cross over from America.

Even though I’m a kid of the 80’s, apart from a few tracks,  most of the tracks are new to me. Are there many tracks that have any sort of significance for you personally?

So many! This box set is essentially a soundtrack to my late teens/ early 20’s.

One in particular (if i had to choose one!) that takes me back to a good time and place is Monyaka’s lost 1983 gem Go Deh Yaka which was an anthem for me at the club night that i did at Bogarts in South Harrow. It was a tune that was much loved by our regulars like the Harrow girls, the Hackney Boys and the trendies from Soho who made the trek out to the suburbs each Tuesday to dance their asses off!!

Are there any tracks that you are particularly pleased about being featured on the album which is set to reach a new audience that potentially have never heard some of the songs.

It’s been so good with this boxed set to put the spotlight once again on great tunes from the likes of Fantastic Something’s early indie pop classic If She Doesn’t Smile (It’ll Rain), Friends Again’s jingle jangle masterpiece Honey at the Core. The Jellies post Punk Disco gem Jive Baby on a Saturday Night, Strawberry Switchblade’s melancholic beauty Trees and Flowers and I Level’s Brit Funk peach Give Me among many, many others.

The album features some artists that are no longer with us including George Michael Wham and Pete Shelley Buzzcocks. Do you have any memories of being in the presence of these musicians?

George and Andrew i knew very well at the beginning of their story and socialised many times with them and they subsequently invited me to hitch a ride on their Club Fantastic tour as their warm up DJ which was an amazing experience.

Pete i interviewed many times over the years and what a lovely fella he was. It was always good to talk music with him. And he was such a talent. His and Buzzcocks songs have been such an important part of my soundtrack and like everyone i was so sorry to hear of his passing.

Homesapien blew my head off when i first heard it in 1981 and encapsulates that period when the dance floor became the place to be. It really is an honour have it on the compilation and a testimony to his talent.

Do you have any other projects on the go?

Always trying to think of new ideas and there’s a couple of projects in the pipeline which hopefully will materialise. Don’t want to jinx them by talking about ’em though!

Finally,  what’s on your turntable at the moment?

Thankfully there’s always new stuff i love and i consider myself incredibly fortunate to have my show on BBC Radio London on a Saturday night at 6pm to showcase them.

Impressive new music recently from the likes of Louise Distras, the Unloved, The Orielles, Stiir, Park Hotel and Nia Wyn (among many) have all been reminders to me as to just why i fell in love with music in the first place, all those years ago.

Lost 80’s can be purchased via the Demon Group website, there is also a Facebook page dedicated to the album. Gary Crowley can be found via his Twitter page and you can listen to him on BBC Radio London.