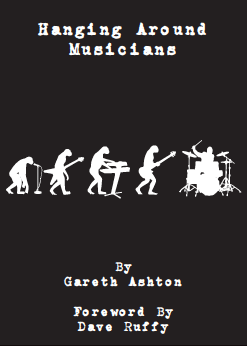 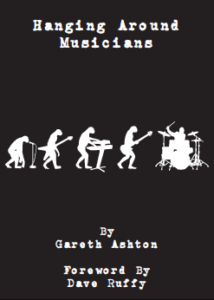 In his auto-biography Gareth Ashton recalls and reflects on 25 years behind a drum kit and time spent supporting bands including The Damned. Features editor Sarah Lay reviews.

“Here I was, getting to do what I had always dreamed of doing. Only they weren’t just my dreams, they were the dreams of my friends, and arguably the vast majority of the audience who would be there tonight. But it wasn’t them, it was me.”

Gareth Ashton grew up in rural Derbyshire and spent 25 years as a drummer with ‘a few minor skirmishes with success’.

During his career he went from punk bands supporting the likes of The Damned to playing in country band The Breeze. Throughout his time on the music circuit, and through the pages of this memoir, it becomes clear that Ashton is a music fan first-and-foremost, a musician by happy coincidence.

And Hanging Around Musicians is a memoir, taking a conversational and informal style to recount the quarter-century of music from Gareth’s view from the drum stool. It covers his introduction to music, how punk hit the small Peak District towns he grew up in, and how he ended up at age 16 in a support band for the Angelic Upstarts and on tour with The Damned.

This is a tale told over the kitchen table as the teapot cools, continued over a libation or two in the pub. It’s full of anecdotes about bands, musicians, venues and scenes as well as the people who supported those taking the stage. There is little glitz or glamour in the telling, but a wide-eyed reverence for those who take on a life in music.

And that is what makes this a special sort of auto-biography; the mixing of the ordinary with the extraordinary. There is an undertow to all the stories recounted in its pages, that even when the playing, touring and recording have become mundane for the musicians, the magic still sparkles for the reader.

Ashton comes close to describing this himself, saying: “I was a part of history; only a tiny fragment but one which has been recorded for posterity.” This book is both a personal recollection, and a history of scenes including punk, funk and country. Both sides of the story recognise the importance of friendship, the impact of family, and how most things come full circle.

There are highly personal moments captured in the book also with Ashton writing eloquently, honestly but concisely about the deaths of his parents. This reflection will ring true with those who have also experienced this loss without becoming overly-sentimental or over-sharing with the strangers reading his prose.

In Hanging Around Musicians Ashton has captured a personal memoir that also provides an insight into sharing a stage with a range of well-loved bands, in a number of different scenes. Whether you were there at the time and want to jog your memory or you’re looking for a different view of a band you’ve just discovered, this easy-to-read auto-biography will satisfy.

Hanging Around Musicians is available now. Gareth also blogs on his website.

All words by Sarah Lay. You can find Sarah on Twitter and read her words about music here.