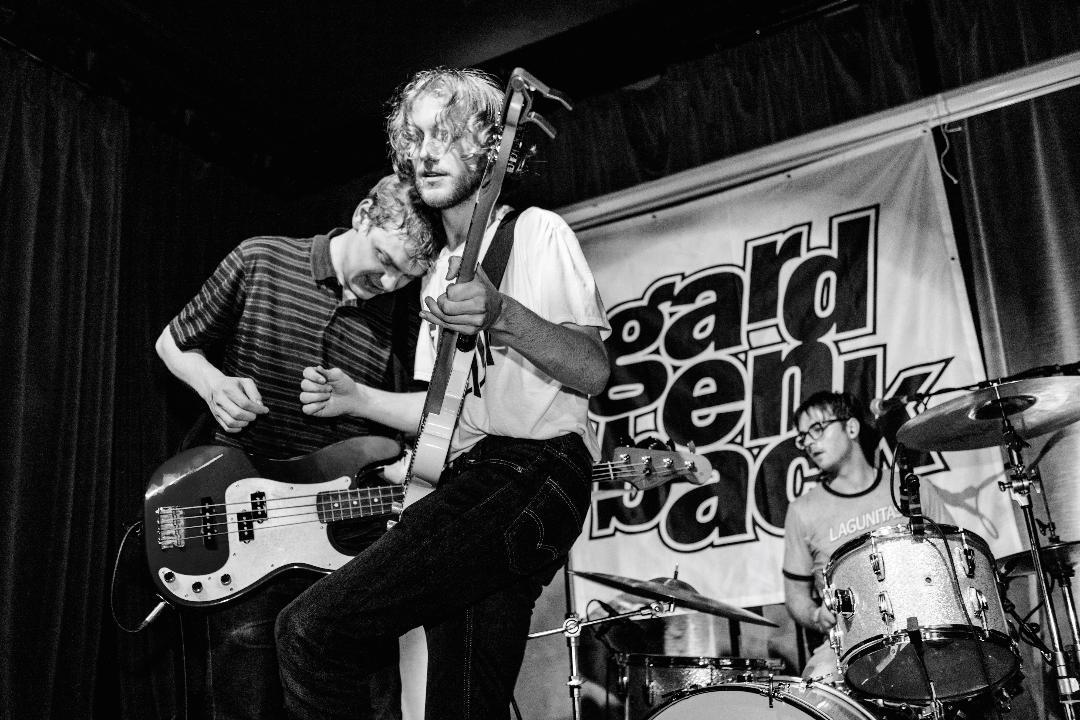 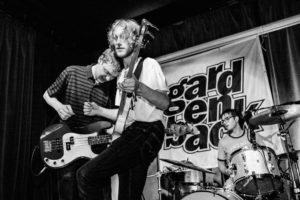 Louder Than War’s Roxy Gillespie finds out more about Oldham garage/ post-punk kings Gardenback and catches their brilliant new Dunjohn remix and video for the single Health and Wellbeing.

Gardenback is a strange kind of name for a band. It gives no clue about their music and sounds kind of mild, which couldn’t be further from the truth. Their sound is far more exciting and vital than their name might suggest. Formed in 2011 the band spent years playing in basements in their hometown of Oldham, the trio of childhood friends emerged, blinking into the Manchester music scene in 2017. The post-punk musical finesse the band had garnered before bringing out their first recorded material showed. The double A-side single featuring Sleepless and Call It a Phase also came forth, complimenting their burgeoning live reputation. Another audience favourite, Bulldog, followed soon after, giving the fans something to chew on in between live shows.

Gardenback have been compared to many band such as Television, Pixies, Warpaint and Drenge, but have a sound all their own. They have been on a UK tour and have also played support slots all over the country. With performances at Dot To Dot and Kendal Calling, their festival credentials are also assured.

With the release of their newest single, Health and Wellbeing, Gardenback have also gained the attention of Radio X and Kerrang. John Kennedy touted the single as an ‘Xposure Hot One’ and Jack Wood at Kerrang made it his single of the week. Watching the video, it is easy to see why. Hidden within the excellent garage/ post-punk there is a lyrical desperation and darkness. The song feels like the hand of a drowning man reaching out for someone to save him. Gardenback have produced a gripping offering excellently delivered.

The video has been identified as of possible danger to epileptics.

To say the video is a fantastic onslaught of image and colour is an understatement. It matches the force and vibrancy of the music perfectly. The flashing garish colours of jagged patterns zip across the screen as the band plays, interspersed with video footage of planes, vehicles, crashes and explosions. There is no time to take stock, no time to really focus as the video continues at ballistic speed; music and video entwined like the tangled wreckage of a high-speed crash. It is a stupendous spectacle.

The new Dunjohn remix is like an abstraction of the original, as many of the best remixes are. It takes the music onto another plane of existence. Full of crashing guitars and insistent rhythm, it takes on a fabulous life of its own rather than just being a re-working of the original. The vocals are sparse and well placed, adding definition.

Gardenback have a pared-down name and stage persona, yet the music suffers not one bit. If anything, it places it firmly where it should be – centre stage. They do not have to wear anything outlandish. The amazing sound they produce is almost accentuated by their lack of pretension. Catch them live or love the video. They are a truly atmospheric and accomplished band likely to go from strength to strength.

Band photo by Dani Blakeley. Find her on Instagram at Daniblakeleyphoto.

The video for Health and Wellbeing created by Alex Bennett @capacitorrr.