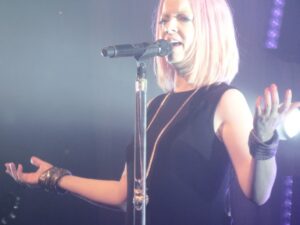 Garbage’s penultimate show of  ’20 Years of Queer’ tour at Manchester Academy with support from The Dutch Uncles. Louder Than War’s Paul Holloways reviews the evening.

There has always been something, if not queer, then a bit unorthodox about Garbage. The dynamics of the band, how they formed; Shirley Manson practically came from another universe to the rest of the band.

Producers Butch Vig and Steve Marker set up Smart Studios in Wisconsin way back in 1983. Butch had been playing in bands with Doug ‘Duke’ Erickson since 1978. By the time they swooped to pick up Shirley, (who was 7-15 years younger than the guys), from the relative obscurity of the early 90’s Edinburgh Indie scene; they were established Mid West rock luminaries. Smart Studios clients read like a who’s who of American Alternative rock; with the jewel in the crown of Butch’s impressive CV; producing Nirvana’s ‘Nevermind’.

They may have come from completely different worlds but the chemistry worked. The feisty Scottish front women and the technically brilliant American rockers both complimented each other. Maybe it’s because they became a creative unit, with Manson as an integral part of the song writing process, not just a stunning vocal and visual front for the band. The music has stood the test of time and so have the live performances on tonight’s evidence.

But before we get to that, there is the small matter of a support slot from Manchester’s best kept secret, The Dutch Uncles. Front man Duncan Wallis reveals it’s the band’s first appearance on the Academy 1 stage after numerous occasions playing on the Academy’s three other stages, including a headline show at Academy 2 playing their third album ‘Out Of Touch In The Wild’ with a string section. If there was any justice this lot should be doing sell out shows at Academy 1 in their own right.

In their thoroughly enjoyable half hour set there was time for the stand out songs from their first four albums. As well as a new song, ‘Achameleon’, which has a bass line that, turns the funk up to 11. Who needs Nile Rodgers when you’ve got Robin Richards.

There’s Duncan Wallis’ trade mark dance moves, (somewhere between Ian Curtis and Bez) and Pete Broadhead works the audience with his xylophone mallets; (if any other contemporary band has used this instrument to such wonderful effect since The Violent Femmes, I can’t think of them).

Both Wallis and Manson talk affectionately about each other’s bands. It’s apparent that both headliners and support have a mutual respect and have enjoyed touring together. Shirley reveals that one unfortunate and profusely apologetic, Dutch Uncle walked in on her on the loo at the Brixton Academy when she forgot to lock the door. She spares his blushes a second time by not naming him.

So on to the main event. The show starts with a video backed by ‘Alien Sex Fiend’ (Stupid Girl b-side) projected on to a giant white sheet across front of the stage. There are shots of the band back stage in the mid-90’s full of punk attitude, (some of it filmed by Butch on a hand held video recorder), mixed in with footage of topical events from 1995 including Princess Diana and Bill Gates amazing new software. We are transported back 20 years.

Garbage perform their opening number ‘Subhuman’ (early limited edition single) behind the screen. Each of the band’s silhouettes is easily recognisable; Shirley’s pink feather boa and Duke’s pork pie hat. They have teased us enough, so when the sheet dramatically drops to the floor after the first number, they roll out the big guns. ‘Supervixen’ followed by ‘Queer’.

It’s like nothing has changed in the last 20 years. The boys rock out with the same effortless swagger and Shirley owns the stage with the same allure as when she first uttered “Hey boy take a look at me, let me dirty up your mind…”

She’s an amazing show-woman, no wonder Steve Marker could see something in her from just an MTV showcase of her pervious band ‘Angelfish’. Her voice may not have the widest range but it does have a really authentic quality. She takes no nonsense and has bags of outwards confidence that has made her a bit of a feminist icon. Of course confidence is sexy; she has that rare Wendy James type quality of having that look that says “Come here” and “I’ll eat you for breakfast” at the same time, (although if Shirley’s serving up breakfast, I’d avoid the cornflakes).

But under that self assurance there is a sense Shirley is still pinching herself that she’s here at all, plucked from indie obscurity to join a band nearly four thousand miles away. She tells the story of meeting the rest of the band for the first time in a London hotel after she had been spotted on MTV. That glimpse of vulnerability just makes you warm to her more. She describes the surreal nature of the call she received out of the blue and how she knew straight away that she had a connection with the rest of the band. After her unorthodox recruitment, over a period of years the rest of the band have become like brothers to her.

Hindsight shows the Garbage boys made the right call investing time exploring the potential of a front woman they had only caught a glimpse of in a little known Scottish indie band’s pop video. But you get the impression there is no shortage of know how in the band. Butch Vig’s role in developing Nirvana can not be understated. Has a band ever made a creative leap as huge as Nirvana’s between ‘Bleach’ and ‘Nevermind’? Sure Kurt Cobain’s maturity as a songwriter, the arrival of Dave Grohl and the backing of a major label helped but don’t under estimate the influence of the genius twiddling the knobs on the mixing desk.

Tonight’s show is retrospective with very little of the set list being post the self-titled debut album. The show is peppered with rarities and b-sides from circa 1995 which have been included in the 20th anniversary re-issue of the album. Including The Jam’s ‘The Butterfly Collector’ which was a b-side for The Jam in the UK and a single with didn’t chart in the US. Garbage used it as the b-side for ‘Queer’ in 1995. Prior to this evening I was only familiar with The Jam’s original. Garbage’s version really sleazes it up. Shirley also shares details that she was listening to The Jam during a formative sexual experience.

Prior to the encore a trio of big hits are served up ‘Only Happy When It Rains’, ‘Stupid Girl’ and ‘Vow’. The band returns to a rapturous reception. “We’ve got a few more songs we’d like to play before we send you home happy with one you’ll all know” says Shirley. There is a cover played as a tribute to late American songwriter Vic Chesnutt and two more b-sides from the re-issued album ‘Trip My Wire’ and ‘Automatic Systematic Habit’. There is enough here to tempt me to download the bonus singles, shame you can’t click on ‘Complete My Album’ for a CD you bought two decades ago.

The gig closes with the only song played from 1998’s ‘Version 2.0’. ‘When I Grow’ reminds us there is plenty more to Garbage’s back catalogue. But no complaints – it did say “20 years of Queer” on the ticket and we’ve all been thoroughly entertained.

What’s more a new Garbage album is due in the spring of 2016. So let’s look forward to hearing more classics with the new material from them on the next tour.

All words Paul Holloway. More writing by Paul on Louder Than War can be found at his Louder Than War author’s archive. Paul also presents Living For The Weekend on Stockport’s radio station Pure 107.8FM every Fridays 11am-2pm & Saturdays 8-11am.