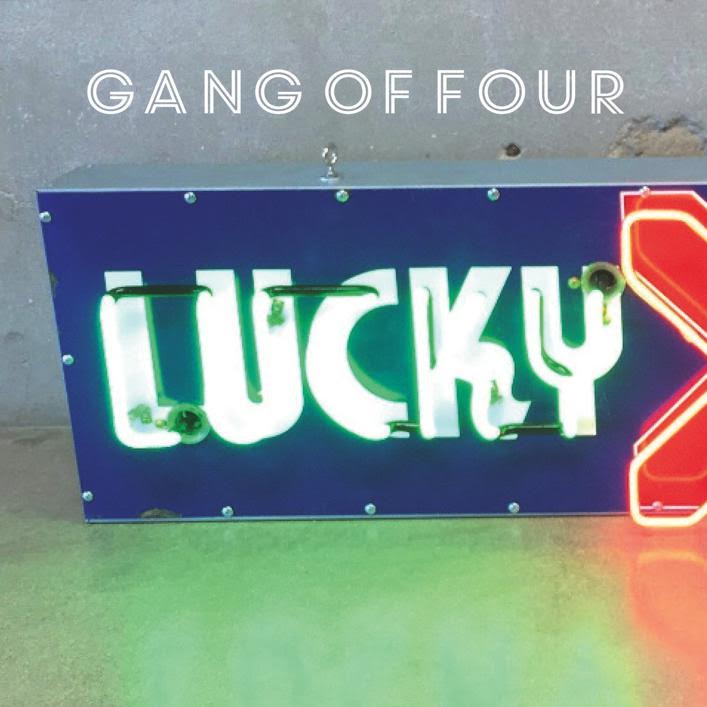 Their first new material in three years, the release bookends a period since 2015’s critically acclaimed album What Happens Next, during which Gang of Four have been championed by artists as diverse as St Vincent, James Murphy of LCD Soundsystem, Pharrell Williams and Frank Ocean, the latter of which sampled the band on Blonde. Gang of Four are trailing news of the EP with the first new track to emerge from the release, Lucky.

Have a listen to Lucky here:

The new track captures producer and founding member Andy Gill advancing his writing partnership with frontman John ‘Gaoler’ Sterry, aided by the production nous of Ben Hillier (Blur, Depeche Mode). The results of the newfound approach are borne out in spades on Lucky, instantly identifiable by Gill’s serrated guitar work, with Gaolers’ ‘Gang of Four Everyman’ protagonist by alternate turns both piteous and self-aggrandising. Lucky keeps a characteristically analytical eye on the cut & thrust of the modern world, with the other firmly on the dance-floor.

Andy Gill says; “This track itself is a product of chance. I’d been watching a serious debate on one of those financial news channels – six white men in suits arguing about the stock markets – and it set me thinking about how limited luck can be. America’s demented ringmaster-clown claims to have bestowed fortune on the markets. He believes himself the master of luck. In reality, they are casinos. A lot of trading is anyway now done by algorithms to try to eliminate the element of chance, but luck isn’t capable of fundamentally changing the system. Even if you believe market crashes are the result of bad luck rather than layer upon layer of human and machine error, the system shudders, restarts and goes on as before.”

Gang of Four came into being in 1977 and its first phase, incorporating several changes of lineup, lasted until 1984. Their debut album Entertainment! – voted in Pitchfork’s top ten albums of the 70s & a ‘Record That Changed The World’ by MOJO, equally beloved by the likes of R.E.M., Red Hot Chili Peppers, Nirvana & Rage Against The Machine – felt like a blast of ice-cold water, both in form and content. Gill and King made two more albums in the 90s and another in 2011, Content. When King left the project, a reinvigorated Gill seized the opportunity to reimagine Gang of Four from the ground up. As guitarist, composer, producer and lyric writer, he was and remains the band’s driving force.

You can visit the Gang Of Four website here

news featured prepped by Mike Ainscoe. You can find more of Mike’s writing on Louder Than War at his author’s archive. He can be found on Facebook and his website is www.michaelainscoephotography.co.uk