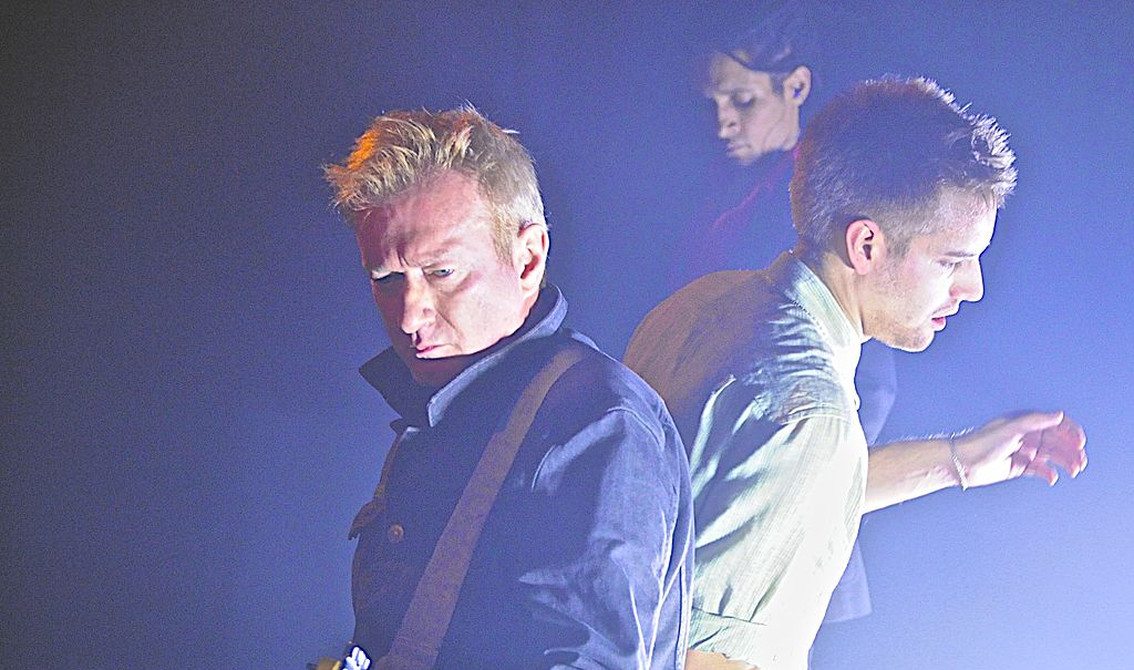 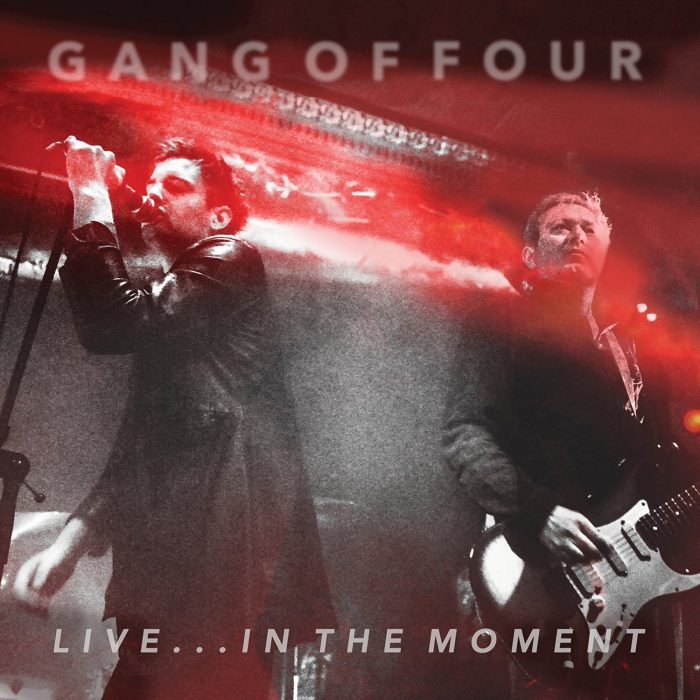 With a new live album about to hit the racks, Andy Gill, the last man standing from the original Gang Of Four kindly agreed to speak to LTW about this one, introducing a new frontman, music and the state of the world in general.

Thanks for chatting to LTW, Andy This is the second Gang Of Four live album (after 84’s “At The Palace”) – what is your take on this one? Are you happy with the results? Do you think it was something that fans wanted? Was it important to give a live “voice” as it were to the current line-up?

AG-It’s been literally decades since a Gang of Four live record and I didn’t totally love the last one which was the mid 80’s “AT THE PALACE “.  We’ve always been a very strong, powerful live outfit so it makes complete sense to release this record at this point in time. Also the sound of it is amazing ; big;  It totally captures what a great GANG OF FOUR gig is like in all its excitement and precision. And of course it showcases Gaolers’  (new vocalist John “Gaoler” Sterry) full-on performance and stellar vocals.

It’s good that the album has a broad selection of songs from across the Gang Of Four career- did you struggle to pick a set and is there any you think you shouldn’t have omitted with the benefit of hindsight?

AG– There are lots of songs that I wish had been included.  It kind of comes down to practicalities.  Just off the top of my head I could mention “Return The Gift “or “First World Citizen “. I guess at some point I will want to record some of these songs live.

Is the energy and performance more important than perfection on a live album?

AG- Energy and performance is enormously important but I also don’t want things that are huge mistakes or totally out of tune which I admit, occasionally happens.  Usually with my vocals.  And yes I did patch up a couple of my vocals but not Gaolers’ who always sings pitch perfect. . Which is pretty remarkable I would say. This record ( Live . . .  In the Moment ) is very special; Gang of Four has always given the songs extra power and dynamism when playing them live and it is totally captured here. Everyone who has heard it has been completely blown away!

How do you feel that John Sterry has fitted in to the line-up? What has he brought to the band’s sound? Has he had any negativity from fans as regards “replacing” Jon King?

AG- When Gaoler joined there were a couple of gigs where a few people had not realised about the change of singer and who did not like the change .  But as far as I’m concerned I think he has a fabulous voice and I really love working with him. Gaoler  has been with me now for a few years and we’ve done quite a number of gigs together. We’ve developed a good sense of how we interact on stage and it still developing and of course there are a number of songs where there is a vocal back and forth, And now within the record there are even more. To be honest it’s always been a theme of Gang Of Four songs. 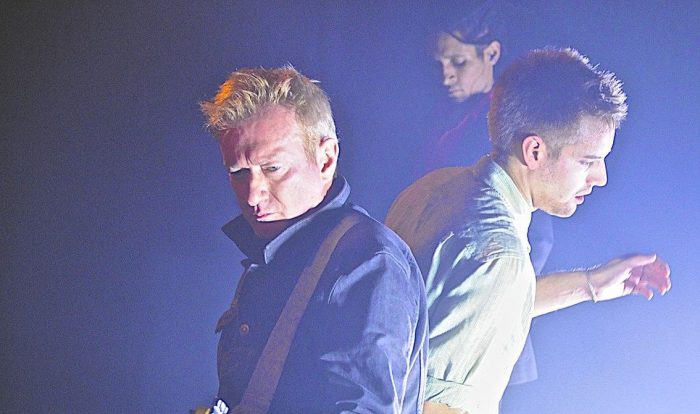 The band have evolved constantly without ever losing sight of what you do well. What do you feel is the secret to “being” Gang Of Four?

AG- I’m not blowing my own trumpet, but I have always been the focus of the band, it’s engine, the fulcrum around which it turns. As long as I’m there you will hear the same rhythms, the same approach to the guitar, to making songs.

The band remain a political voice amongst the fluff of most music; do you think you are more relevant now in the current climate? Have things came full circle since the battle lines of the 70’s?

AG-I think the band has never been that much about conventional politics it’s always been an observer of behavior and ideologies. But having said that, politics is always shadowing the content of the Gang Of Four songs. I think a lot of us thought in the 60’s that there would be ongoing steady progress in all areas of life. Society would become more liberal and progressive –  prejudices would slowly disappear as we understood each other better. Women would be treated equally to men and be paid the same, racism would disappear.  We now know that history is not a process by which the world inevitably gets better and better and we were wrong to imagine that that would be the way it would go.

It does seem like new bands are less inclined to be involved with anything to do with politics. I think people are possibly afraid they might end up boring the audience.  I sometimes think these things are rather fashion lead, and politics is not in fashion.

It’s a less straightforwardly polarised world now than it was in the late 70’s early 80’s.

I really like Sleater- Kinney; obviously not a brand-new band but still comparatively young and their music and approach is imbued with all kinds of political themes and sexual politics. Bands in general should be a bit more interested in making things that are important and radically new.

How did the Brazilian shows with Legiao Urbano go? Can you tell me a bit about your involvement in those?

AG- The  Legiao Urbano experience was a lot of fun.  They absolutely love Gang Of Four and when they did the two big shows in São Paulo they wanted to fly me over to take part in it with them and to play some of their songs with them on stage and for them to play a couple of GO4 songs as well.  I became friends with Dado as a result and he has sung a Brazilian version of ‘Broken Talk’ which will be released at some point on some format or another

Your production work; you remain in high demand. Is it difficult to separate that from Gang Of Four or is it a case of “two different hats”? Tell me a little about who you are working with in the future/currently?

AG- Talking to a couple of different artists now but to be honest I feel very involved in Gang Of Four now, and the next record.

The departure of Jon King; was it a surprise? I guess most fans associate you two as the core of Gang Of Four. Did you ever consider chucking it after he left? Or did it galvanize you into creating what became “What Happens Next”?

AG- Yes,  Galvanized .   No, I was not surprised re Jon King. He often had a semi-detached relationship to Gang Of Four

On the subject of  last album “What Happens Next”, the reception to it was mixed from critics- some stated it was more of an Andy Gill solo project. What was your reaction to that and do reviews ever concern you?

AG- The reception to “Entertainment!” was mixed from critics, which people often forget . The  reception  to every Gang Of Four record is mixed .  I’m not bothered if people think it’s just me. I have been responsible for the music on every single Gang Of Four record and me and King handled the lyrics.

Spin voted you in their top 20 (of 100) influential guitarists. Where did that distinctive style evolve from? Has it changed much? Did you ever consider going back to the conventional power chord/major-minor style at any point?

AG- When I was about 10, I remember being obsessed with ‘Satisfaction’ by the Stones. A bit later, Jimi Hendrix.  Then , as a teenager ,  Bob Dylan, Velvet Underground, James Brown, Motown, and always Reggae.

Many different musical forms have been a huge influence on the way I developed the musical language of the band.

People often express interest in the fact that the Gang Of Four does not wear these influences on its sleeve.  You would be hard pushed to find a Gang Of Four track that makes you say ‘that sounds like the blues’, or dub reggae  but if you look carefully it is there.  Specific influences on my guitar style would be Hendrix, Steve Cropper, Wilko Johnson, Keith Richards and Robert White from Motown.

Who in modern music do you rate? Does the world need a new Gang Of Four?

AG- I like St Vincent , Sleater Kinney and some of Kanye West .  As usual– all American .  The world needs some different stuff.

What drives you as a song writer? Does it come easily or is it a struggle at times?

AG- I never find it easy at the start, but once a song takes on a life of its own, then it carries you along and it starts to do some of the heavy lifting itself.

You’ve worked with some interesting folk over the years; The RHCP, The Stranglers, Michael Hutchence. Can you let us have some good stories about these characters- the more outrageous the better!

AG- A lady never tells her secrets .  You boys are coming on like The Sunday Express !  I think everyone knows the stories about RHCP smashing acoustic guitars (“ not on my fucking record”), shit in a pizza box , engineers running away as fast as possible etc etc..

What’s next for Gang Of Four and for yourself?

AG- I might be producing a re-working of the solo album I wrote with Michael Hutchence.  I’m in conversation with various people about this including Danny Saber who co -produced with me the original album in the 90’s

Producing and mixing the new live album: Live in the Moment has been pretty time-consuming. I’m a really good record mixer but I am certainly not the fastest.

So, I have not spent as much time as I would have liked at working on new songs, so that’s what I’m trying to do now. I have a few new ones in the bag and we will start to play them soon

In terms of live gigs ; well , we are going round North America for 4 weeks ; so, all of October.