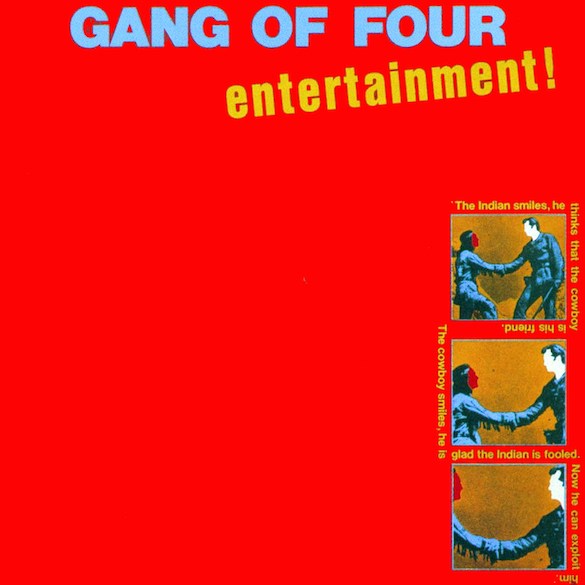 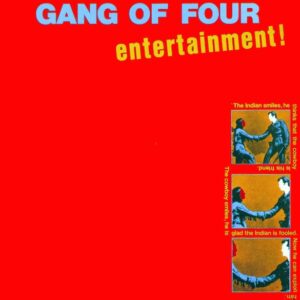 Gang of Four: Entertainment! A Reappraisal

There’s just not enough Situationism in music any more. Amy Britton looks back to it’s musical heyday in the work of The Gang Of Four.

Entertainment!, as I’m sure you all know, was the incredible debut album by Gang of Four. Since it’s release it has, correctly we feel, regularly appeared in many “best album of all time” lists. It’s also an album we know is very close to the hearts of a lot of our readers, writers and editorial team members, so a reappraisal in these (web)pages seems like a perfectly reasonable thing to. Amy Britton has taken up the baton for us, and her reassessment of Entertainment! can be found below. By September 1979, the release date of Gang of Four’s seminal debut album Entertainment!, Thatcherism was in its infancy – she had come to power three months previously – but it was already apparent that protest music was going to have to be in a whole new league of dissent.

Perhaps, in its applied use of left wing theory such as Situationism, this album remains the definitive voice of the brewing dissatisfaction. We know this before the record is even heard, from its Constructivist style artwork designed by Jon King and Andy Gill themselves depicting a cowboy tricking an Indian into friendship in order to exploit him. Once the record does kick in, its obvious that we are supposed to be engaging in some serious thought as the claustrophobic clangs of Ether unflinchingly tackle the issue of treatment of special category prisoners in Northern Ireland.

By the time its reached the discomfiting 5:45 – a disturbing reflection on voyeuristically graphic news coverage which, with certain events, has certainly proved its relevance in recent years – there’s been almost a full education on the listeners part, set against a spiky, edgy but blatantly funk-infused post-punk sound. But what makes this record explicitly Situationist, as opposed to merely left-wing? Well, that would be the subtle adaptations of some of the key quotes of Situationism – there are three tracks in particular which define the general themes, and the whole Gang of Four ethos in some respect, to a tee – Natural’s Not In It, At Home He’s A Tourist, and I Found That Essence Rare.

The first of these deals with one of Karl Marx’s theories most widely favoured by the Situationists, the guttansweng (“species-being”). The guttansweng is the idea that people become separated from their human nature and thus become alienated within a capitalist environment. The opening lines “The problem of a leisure/what to do for pleasure?” are Situationist to the core. This is even further run with on what is probably their, big classic, record At Home He’s A Tourist, surely inspired by chapter 30 of Debord’s definitive text Society of the Spectacle, which features the lines “the externality of the spectacle in relation to the active man appears in the fact that his gestures are no longer his but those of another who represent them to him. This is why the spectator feels at home nowhere, because the spectacle is everywhere.”

For me, they are always stronger than on these blatant political statements than when they try and deal with the “demystification of sex”, such as on Contract and Anthrax – the negative portrayal of love is one element of Gang of Four and many of their post-punk contemporaries I have never been able to get on board with. But as a whole this remains a timeless record, even though it could be construed as somewhat disturbing that the political environment has changed so little that it could remain so relevant. They never really fully matched this record, but, given the full artistic punch it provides to this very day, that may have always been just a little to much to ask.