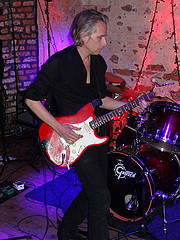 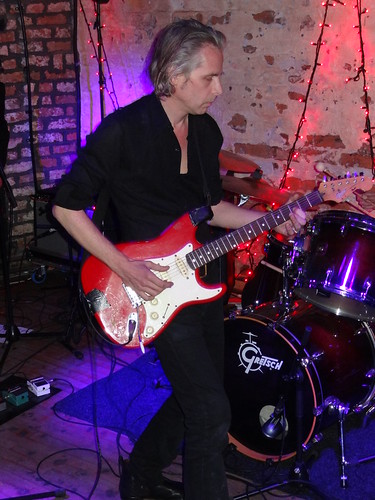 The Hold; the basement venue of Liverpool’s Shipping Forecast is an entirely suitable venue to witness the sonorous hypnotic rhythms of Gallon Drunk;

Frontman James Johnston is flailing around the confined stage, guitar slung across his back arms raised, his hands touching the low slung ceiling as ‘Before The Fire’ builds, the sounds of distant gathering storms, darkening skies, the warming sunlight being quelled by primeval forces, Johnston swirls, he is the embodiment of a rock ‘n’ roll star – stick thin, untamed greying locks; his black suit adds an air of respectability – stark contrast to his wasted persona, he is empowered by Ian White’s metronomic drumming and Terry Edwards hypnotically noir keyboards, then he begins to holler “then your eyes rip into mine” as the song builds towards a tempestuous crescendo…there is immense power within Gallon Drunk’s locked grooves, the cavernous bass of ‘The Exit Sign’ resonates around the room.

This is a much more focussed Gallon Drunk than I previously recall; the atmosphere is taut, punishing drums propel us into vaguely Krautrock territory – a deeply warped region, none of the clean lines you would expect from Neu! et al Gallon Drunk traverse a region littered with the detritus of a life in the back alleys of rock ‘n’ roll…Johnston via ‘Hanging On’ takes us back to 2012’s signal ‘The Road gets Darker From Here’ – less foreboding but still downright dirty rock ‘n’ roll, he steps from the stage and is in to the audience his guitar thrust forward following primitive ley lines feeding from their mystical energy highway…further back we go as they unleash ‘Just One More’ from ‘You, the Night…and the Music’ – you just know, you can see that Johnston and his compatriots have followed the mantra glass by glass ever since…

Edwards keyboards are to the fore during ‘Bad Servant’ as Gallon Drunk add a touch of distorted funk to their traditional sound, further highlighted when Edwards augments with screeching saxophone – Johnston wrapping himself around his guitar, hunkered low before releasing his lupine howl, stood all the while off kilter to his audience, before reminding us that the tour is to promote the recent released ‘The Soul Of The Hour’ album; the title track follows, Johnston’s almost messianic posture as his haunting vocals build in intensity, a nagging tense riff before the entire ensemble succumb to White’s relentlessly heavy drums, huge crashing Neolithic beats, colour coming from Edwards brass, Lee Kurnis on bass tasked with maintaining order within the dark chaos, all of this leading the logical conclusion, the epic ‘Speed Of Fear’ – Edwards distorted keys reminding me of Suicide, the insistent riff and that motoric drum pattern;

Gallon Drunk are ever evolving, they are now in some weird subterranean netherworld traversing shadowed musical genres, their sound is primeval, its primitive and as such instantly connects with your own medulla & cerebellum brain regions those areas that control heartbeat, body senses, things that are not really voluntary; ‘Speed Of Fear’ taps into this and carries you down with Gallon Drunk.