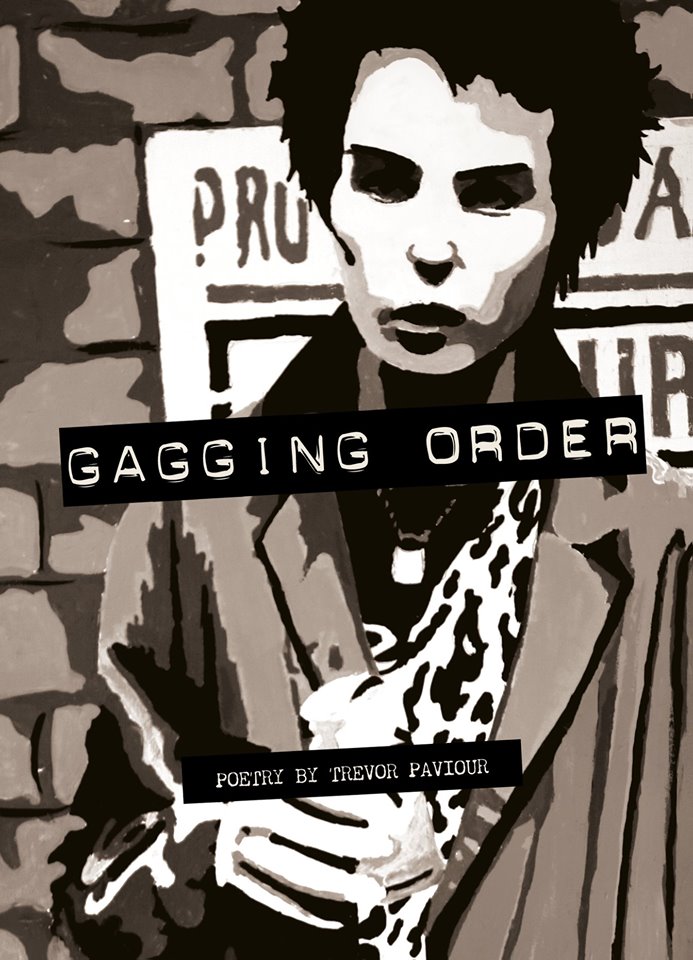 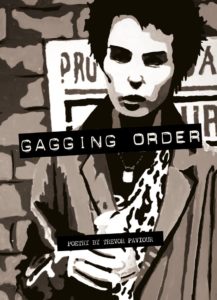 Portsmouth punk poet has his first collection published by the people who brought out the Factories Run By Robots  anthology.

The definition of Poetry  is: a form of literature that uses aesthetic and rhythmic qualities of language to evoke meanings in addition to, or in place of, the prosaic ostensible meaning. And Punk Poetry is defined by Wikipedia here

The Hardcore Punk poetry of Trevor Paviour doesn’t stick to any of the ‘rules’ of how to write poetry ‘properly’.  The feeling evoked or described is mostly anger. And the ‘meaning’ is clear as crystal.  As blunt as a punch in the face.  This is punk as fuck, punk as Class War, punk as the gritty, ugly truth –  poetry.

If it was music instead of just words, it would sound like Discharge or Extreme Noise Terror.  Brutal.  No nonsense. no pissing about.

It is not poetry for people who normally read (a lot of) poetry.  It’s poetry for punks. For natures anarchists who hate ‘authority’ in all its forms – church and state, school and local council…. coppers, bosses, bullies… the lot of ’em.

Probably written straight off, no editing, no going over and over it to get the right word or phrase – stream-of-consciousness -style and, like Billy Childishs poems ‘uncorrected’,  not punctuated and uncensored, they are not easy to read -you have to imagine them read out loud sometimes.

Being a part of the punk scene for decades but not having the necessary to sing or play in a band Trev Paviour finally  found his role. Hardcore Punk Poet.  Reading his poems for the first time is kinda like the first time you heard the hardest and fastest and most uncompromising punk. .  A full-on, fast, brutal attack: Blam-Blam-Blam Raaaaaghhh!!  No subtlety, no slow build up – just straight in…. Get Up Go To Work, Come Home Go To Bed is the first. A bleak existence described in blunt terms. The daily grind of the wage-slave.  The Other Side of The Coin – compares the life on an addict, gang member on a UK estate and a young would be jihadi in the Middle East and the connection – heroin.

The great thing about this book is that it’s existence is down to a supportive group effort by publisher Mike Dines, graphic designer Russ Bestley (both punk academics) and artist Kev Fitzjohn (one-legged psycho with great ‘Sid’ hair!)  who , like Trevor are all Portsmouth punks, all over 50, so more second generation than first -still at school in ’77, but outlooks shaped by punk, whether Pistols, Crass, Stranglers or Discharge.

Kev’s artwork is classic skulls’n’spikes, punk rock’n’roll iconography – the skulls have quiffs or Sid Vicious hair -they are garish, eye-catching and mainly in black and white and blood-red, with the odd ghoulish green and Bollocks-yellow. Whilst they don’t reflect the same themes as the poems, they come from the same place: untutored, aint-bin-to-no-art-school, punk-for-life style.  Art for punks rather than ‘arty wankers’….

I don’t know much about Trev, but from reading (between the lines of) the poems I guess there has been struggles with addiction and health, the brutal education system of the Seventies when there was no such thing as ADHD and underlying reasons for ‘bad behaviour’ were not discussed and there was always a handy cane. There were probably scrapes with the local boys in blue. There may have been time ‘away’… I don’t know. But I do know that Punk gave him both somewhere to ‘belong’, a purpose and a coping mechanism: although punk life usually entails drink and drugs, which aren’t ideal crutches – music, art and freedom of expression are probably better.  Trev has probably learned the hard way.  His friend and Pompey scene figurehead Brian Barnett is credited as being an inspiration.  As I wrote here, one of the last books Brian read in hospital  was the punk poetry anthology Factories Built By Robots which included nine of Trevs poems.  It’s only fitting and poignant that Trev’s Poem For Brian, which was read out at his funeral closes Gagging Order.

Arguably the best thing about Gagging Order is that it’s a big fuck-you to all the teachers and authority figures in his life who said  “You’ll never amount to anything boy!” (A lot of us were on the receiving end of that kind of abuse in the ’70’s. Good solution for bad behaviour – tell the kid he’s worthless!)  And here he has the proof that he has achieved something- a proper, published book with his name on the front. His work. His poetry, his life and beliefs in black and white.

If Trev should ever bump into a old, bullying former teacher who told him he was a useless hooligan with no-future, then he can present him with a copy of his first book.  ‘Every one else pays five pounds for this sir’… he could say. ‘But you deserve one for free, as reminder that you were wrong about me’.

These aren’t poems about ‘wandering lonely as a cloud’, a traveller from an antique land or the Charge of the Light Brigade.  They do have a strange kinship perhaps with Sylvia Plaths ‘Not Waving But Drowning’  – combined with the ’77, we told the truth’ punk attitude.  There is not much joy and only the darkest humour here – this is poetry which is raw and has abusers of privilege and position in its sights.

Gagging Order is an impressive collection. Paviour is a unique voice -un-gagged and free to express himself thanks to punk and its community.

It will be available from Itchy Monkey in due course or you can email the author c/o his partner Pam at pamelaeckersall3@gmail.com to get a copy by post.