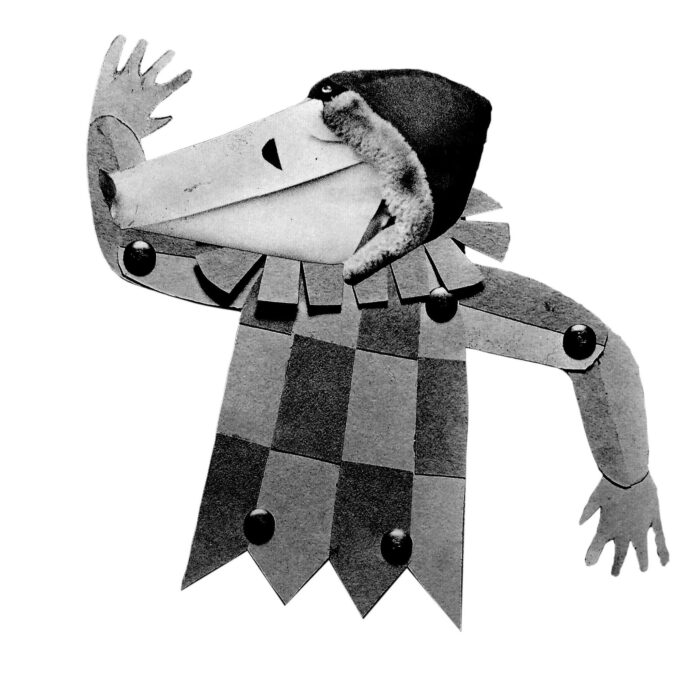 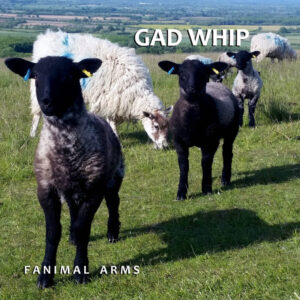 Gad Whip’s new album is one for the wreckers and the loons. A midway point between LFO’s Frequencies, Nine Inch Nails’ Closer, and Bowie’s Earthling. Fanimal Arms really is primed, and perfectly timed, for ”any 21st-century meltdown in a suburban sprawl’’ we call home. Our very own Fanimal Ryan Walker checks it out.

Gad Whip is in everyone and on everything. They are such because they somehow manage to convey the images of every day in a way that reminds us how godforsaken the human race really is but keeps us engaged and excited, enlightened, and electrified by the rhythms of the spaces which surround us. So, behold, Fanimal Arms – the latest album from a (mainly) post-punk group (mainly) from Lincolnshire.  In contrast to 2018’s Post-Internet Blues released on X-Mist; this organised patchworking of material is self-released. Because everyone, and everything, good and pure, in this pathetic span of time, this experiential stretch of space, is self-released – an expression of emptiness, an unleashing of evil, an externalization of the innermost to unfold and flatten those who ask- What’s Up?

Or, in this case, a recitation of the ”bittersweet tales of going the wrong way down the one-way of life’’, of ”looking at the world from a rest home for retired horses, ancient river crossings and abandoned museums” – so as we gaze through the dark glass, Gad Whip soundtrack, the sublime, the surreal, the suburban. 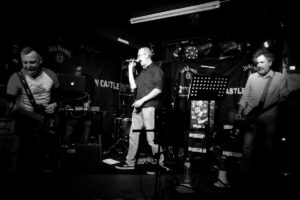 Prophetic as always but with a  contemporary, observational window to lean out of and watch the landscape capsize under the weight of its own wanton dogmas, Gad Whip’s vocals and words, provided throughout by Pete Davies, provides the voice of reason shining like a beacon through the megaphone’s nozzle. The music by Lee Drinkall oozes with an equally inspiring and odd sense of allurement.

Desk Gate for example regularly changes shape quicker than one can conceive of being real in one song. The lurching, acerbic vocals seem to wipe surfaces clean with one thick lick. Tenacious, titanium drums crash together and crack apart like claps of manic thunder splitting English hills into pits of rubble. Alloy sheets are soon dripping with sweat as blowtorch guitar melodies seem to crease and wrinkle their otherwise perfect complexion like a splash of sulphuric acid in the face of some remotely controlled elected official, or expert celebrity goofball.

In other words, it has that intense, enthralling, hot anti-rock edge but can be blistered into millions by the other side of Gad Whips’ musical mindset – the experimental, electronic tricks and trips, warped and distorted, sometimes subtle and delicate, really take the mind’s inner ear on an adventure to the point the eyes are flickering before a film we are all forced to play a part in. Iggy Pop’s Lust for Life cut to pieces by Autechre and assisted in being glued back together by John Frusciante. The Cardiacs sharing a 7 inch with Cabaret Voltaire and always boiling with newly imagined moves, moods, mannerisms of approach, and methods of attack.

WTF Love expands new spaces and explores new sceneries. Atonal, angular guitars chime and supercharge the atmosphere whilst a wobble of bass and rollicking thrum of drums keeps things pinned to the same stick of skin. Stream of consciousness vocals situates themselves on the edge of one’s vision, droning and drooling and refraining that age-old question – ”what the fuck is love’’, after a jumble of anecdotes about the mishaps and misshapen features love often leaves us in hilariously, but darkly heartedly reads reels off the page. 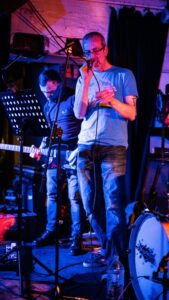 Motorway melodies ensue with Car Finance with its relentless jungle drums. Molten electric guitars sparkle and shimmer within reach and acidic acoustics flourish, unfurl and wrap themselves around the senses like lover’s arms craving a stab of something sweet from whoever, whenever, whatever. Impressionistic wordplay with a rubberized groove glides along the lines, whilst spoken aloud from the sodium podiums, as one is baited into battling with the boredoms and honesties and bereavements of the modern world whilst stood under the floodlights of the local supermarket in a superhero costume. The basic steps of the day all right here and wrapped up in inescapable details – ”wake up early, go for a piss, roll a cig, write a note, then leave”.

On A Count kicks holes through walls and spits at idiots. A jagged toothed machine dragging things into its darkened belly, endlessly churning electronic atmospherics haunt the distance, panoramic vocals, part spoken and buried deep into the pits of the mix and harmonies which are strung above, is a wonderful snap of a song before concluding Side A with 101 Song, Killing Joke’s explosive doom, raging and rioting from all sides of the scene. Public Image Ltd charging forth through the ashes of an abandoned pathway with that eerie ambient fog but that bubbling, antagonistic noise which slices the belly from chest to elsewhere, is still very much rooted deep into the earth of the roads ahead. Less Fat, Added Batteries.

Vape Lounge Lizard, the start of Side B if you should get your hands on the nifty LP, is a brilliant title indeed, and musically, is just as much. It looks up and leans in and levitates aboveground with its serrated, splintered whines of wheeling machines which wish to be switched off.

Guitars shimmer and glisten with mountainous amounts of delay, somehow dragging themselves back and forth from one edge of the earth to the other. Atmospherics and intonations swell and settle and surge up again, always poking and provoking and providing an intoxicating space to immerse oneself in with their climactic, cascading haunt of vibrant chord shapes and vicious changes. Spikes in the rawness of a voice, like a glitch in the transmission being received from afar. Ethereal, icy synths unlace in the background as rubbery, juddering dub drum and bass grooves cruise throughout the night, surrounded by floating blocks of neon, screens of heat, and thick veils of smoke. 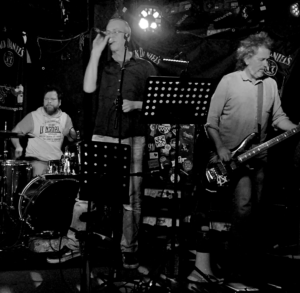 And The Groove is what guides this amalgamation of things to their final resting place in the structured form of a song. A way to pin the limbs of each beat and bassline and instrument and possible genre and potential turn as other, less important ideas perhaps didn’t cut the mustard and fell to their death from the wall they were thrown against. Sundown starts off small, intelligent electronic heartbeats erupt into life as the house is darkened and the strobes seem to blink at speeds incalculable to the human brain. It retains that sense of spookiness and mood.

That sense of euphoria and climax. That motorized, mechanized drive and ritual hypnotism of the hedonistic goblins framed with such astute focus here in a novel, unique, and ultimately, knowing homage to the literal lifestyles of the post-sundown masses as they shift to an echo of phone numbers.

Those leftfield flicks of detail, those detailed spasms and delicate seizures of freakish, angular noise, those ”bags of green and white’’, representing, when the pedal is pushed and the power emerges, the wonderfully schizophrenic, consistently synchronized and interconnected nature of the group. 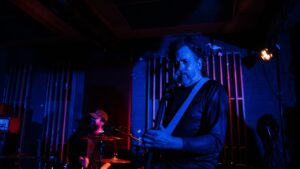 Dot Guv continues this electro house mood, but with Davie’s voice, the lyrics, the organ – it breathes new life into old warehouse lungs. An underlying drumbeat rhythmically entrancing all those who take notice, alongside that beautiful, broken keyboard, crackling and crawling into something else. Sharp, synth stabs, those cavernous 808 squelches, and dirty rave flavors are more psychedelic than most pirate bands would be capable of shitting from their vintage fenders, whilst Gad Whip occupy that liberating, liminal existence between Bauhaus and the Blue Orchids. Between Pere Ubu and the Pop Group. Between Fad Gadget and the Fall. Between NFADs and PWEI. Between then and now. Between you and me.

And that’s the point. It’s contemporary. Clever. Leaves the listener clues as to where they got that idea from, why they got that idea from where they did, and what for. A bomb unto themselves, exploding slowly, who have managed to assemble the remnants and the ruins of bygone eras and staple them together in a way which surpasses museums and instead, augments the importance of each passing moment, frozen in frames. Contrary to the Dada forefathers who condemned the notions of manifestoes, of memoirs, of some kind of archiving of their own history, Gad Whip fluently and forcefully create pictures and construct images of a certain sentimental charge, but without shedding a single tear or shredding a piece of skin. It’s poetic and postmodern. Industrial and thunderous. Humorous and tragic. Anti-rock peacocks and pro-art riot city pigeon. A collection of what they hold close and consolidation of those instances when we crush things to dust and rebuild them better than before.

Clickbait palpitates like LFO but ends like The Chameleons doing a Peel Session. Kept together by the conventions they shit on and very much living up to the manifest and the message scripted when building this vast, intact musical bridge together – a deconstruction of everything we hold onto. Destruction in the name of knowing nothing to deliberately deliver results untouched by the hands of man. Let’s begin again. In the hills. At the rave. On the road. With Gad Whip.

Available to pre-order from Bandcamp.