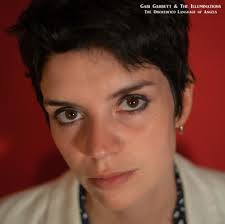 Gabi Garbutt & The Illuminations – The Discredited Language Of Angels

Debut album by pop/soul band Gabi Garbutt & The Illuminations, who recently provided tour support for Edywn Collins and the Libertines….Ian Canty is dimly illuminated, the best way to see him…….

The only previous knowledge I had of Gabi Garbutt & The Illuminations was seeing them support Edwyn Collins at his recent gig at the Wedgewood Rooms, Portsmouth. So they gets points for keeping good company straight off the bat. Gabi herself cut a slight, nervy figure between songs, but when engaged in musical activity a clear talent and restless energy shone out. The Illuminations (needless to say this young mob aren’t related in any way to Bette Bright’s backing outfit of the same name) provided a sound basis for the songs too, the whole package kind of reminding me a little of Graham Parker And The Rumour (with a horn section). That’s not exactly a bad outfit to be likened to either.

Though since I’ve seen them in the press compared to Dexys (Sean Read, a current member of that band, produced the album), when they got into their groove they warranted my comparison by carving out some powerful street level soul more in the style of the Rumour, albeit with a different emphasis lyrically than Parker’s fiery intensity. Having made a good impression in the live setting I was interested to see how this transferred to disc on the band’s first LP, The Discredited Language Of Angels.

If the album title could make one think this record might be a bit pretentious and too wordy,  Gabi’s conversational sing-speak style quickly sets things out on a far more accessible course. This is an album of personal observations portrayed in a feel-good and lively musical style, giving the listener a feeling like you are the only one sharing this person’s confidence and thoughts. This might sound an easy thing to do, but getting it right without sounding a drag is a difficult thing indeed. It is neatly accomplished here.

This a record with a lot about personal experiences both good and bad (though rather more on the good side), with music that skips along mostly in a lively, upbeat fashion. The Discredited Language Of Angels gets underway with a fine flowing pop song in The Fool, with horns and organ right to the forefront. The Higher Place follows in a similarly punchy mode and the slower Reason To Believe gives us the first subtle hint of a folk influence.

Heat Of The Machine has some choice singing, a strong song of devotion in the old soul mode with a smart acapella ending. There is also the first real sniff of bad times in the lyric, a necessary comedown after the opening three tracks’ almost non-stop optimism. This seems to be a tactic purposely employed by Gabi in her songs, very much stressing the importance of human relationships and the value of simple joy – making the best of bad times.

Lady Matador is much more “rock”, though the soul in Gabi’s voice is what makes it work, but the piano ballad Notes From The Undergrowth slows down the pace. I really like the way she says “wiry” on this, some nice bell sounds on here too. Next is a real upbeat showstopper in Armed With Love and the 50s style pop approach on I’ll Do Anything real works well.

Down By The Waterside reminded me a bit of Squeeze, the lyrics here benefit from a darker, more conflicted hue than the certainty of the album’s more joyful songs. It works really well, probably the best piece of the album for me. Ravens And Angels wrapped things up nicely, the soul horns are back with a vengeance coupled with great organ playing and lively singing make it a truly memorable effort.

The Discredited Language Of Angels is a very enjoyable album that hints at hidden depths. Lively, likeable, a little one-paced in places, but all things considered there is plenty of promise of good things to come. I suspect there are a few more acerbic, less carefree tales for Gabi and band to furnish us with, without losing their in-built bounce. That is something that is much in evidence here and gives the album a breezy energy which kept this listener rapt for the duration. As a debut album, it’s full of lively vim, insight and passion and acts as a great introduction to the world of Gabi Garbutt & The Illuminations, with plenty of power and soul to be going on with for the meantime.