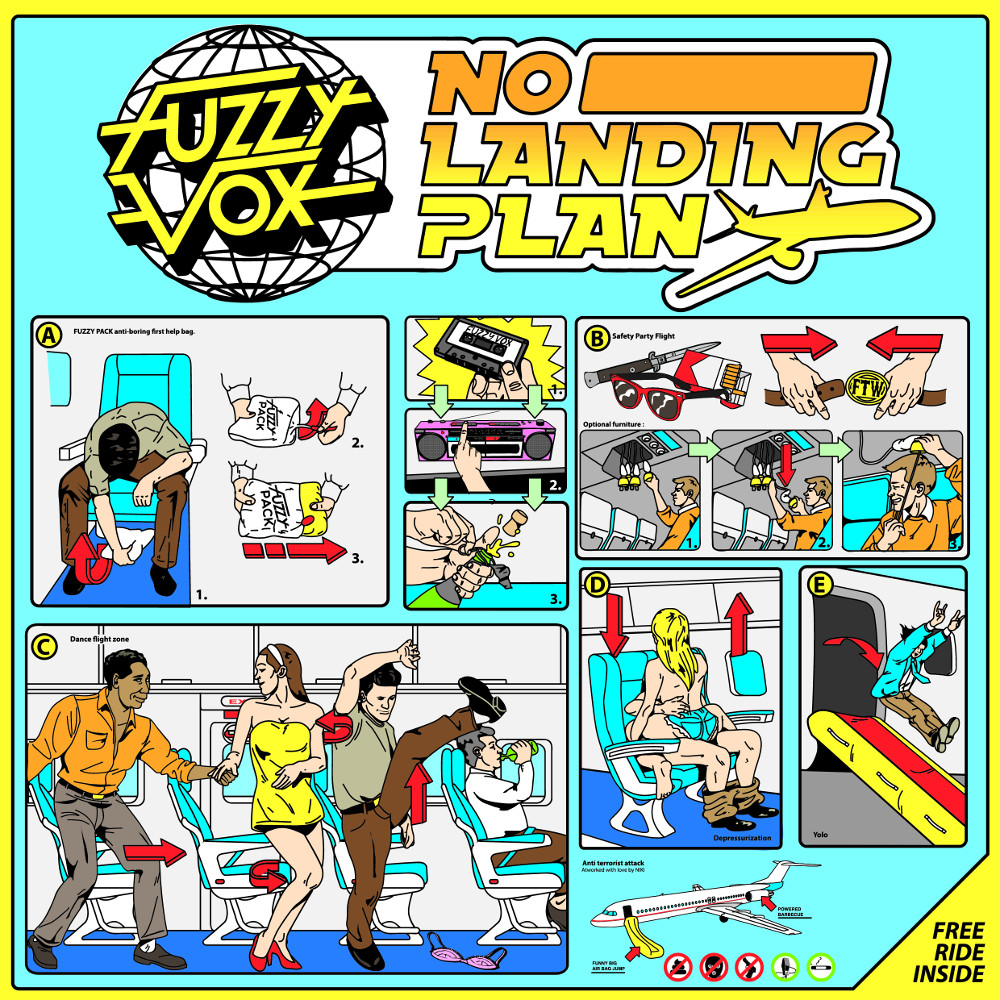 Well it had been awhile since I had listened to anything by a French band and Fuzzy Vox’s upcoming second effort turned to be a really good surprise. Eschewing the trappings of singing in French (let’s face it, nobody can pull that one off apart from Serge Gainsbourg), the band’s singer Hugo Fabbri master of the English language is excellent and you don’t spot a trace of accent. Formed in 2011 in Joinville Le Pont near Paris, the band released their first EP in 2012 and another 2 the following year. The bands first LP “On Heat” was released in 2014, mixed by Pelle Gunnerfeldt who produced The Hives’s “Veni, Vedi, Vicious”, the record displays an obvious link to the Swedish’s combos sound but with a definitely poppier approach. Their sophomore album “No Landing Plan” recorded last year is a natural evolution of the sound on the first LP, it shows a band who has refined their craft.

Starting with the frenetic “Explosion of Love” with its propulsive drums, the band continues with another steamroller of a song with single “Distracted”. “Told You Before” takes The Who’s “I Can’t Explain”, injects a good dose of steroids which results in a perfect slice of garage-pop. “Grow Evil” is a heavy pounding track that manages to quote Echo and the Bunnymen’s “Back of Love” for its intro and mix with a chorus “a la” Troggs circa “Wild Thing”. “I Got a Girl” with its immaculate surf backing vocals would have fitted nicely on The White Stripes “White Blood Cells” whereas “Bo Diddley” pays homage to the legendary Rock’n’Roller’s tribal beat. “Don’t Leave Me Behind” showcases the band more melodic side with again some nice backing vocals and an infectious chorus that will implant itself in your head for a while as does the bouncy “Easy Street” with its Bruce Foxton-ish bass line. They manage to pull off a social commentary number with “Charlie”, a song based on the attack on anarchist newspaper Charlie Hebdo that happened in January 2015 in Paris.  The record closes on a different note with the jangly “A Reason To Love” that offers a nice contrast with the first half of the LP.