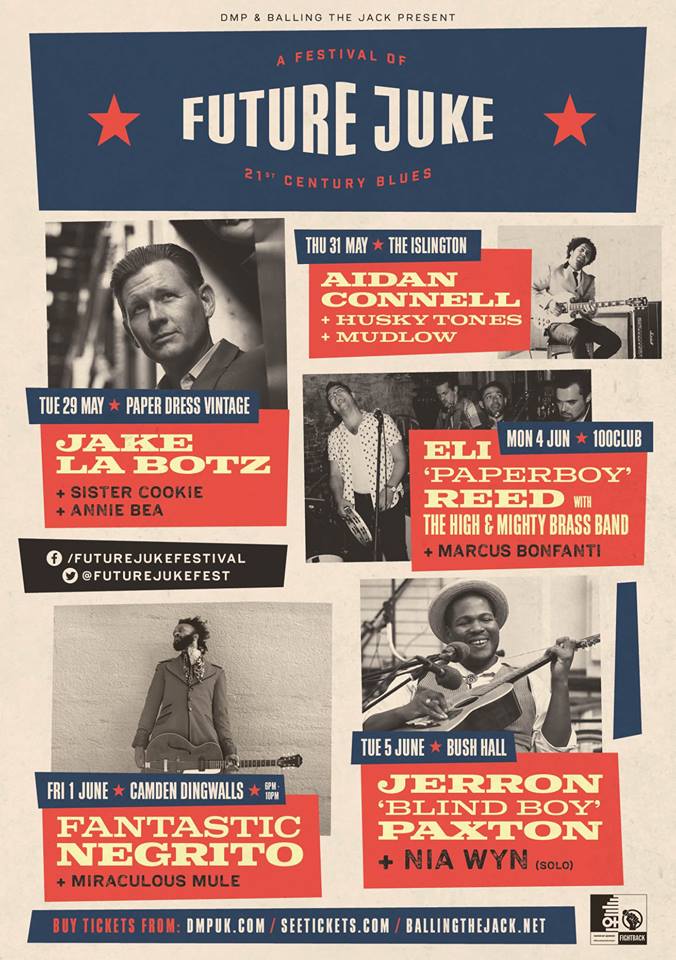 Future Juke: A Festival Of 21st Century Blues presented by DMP UK and Balling The Jack.

Now this sounds interesting, not least because the series of 5 gigs takes place between 29 May and 5 June in some of London’s top music venues. They also feature a couple of highly recommended artists we’ve featured on Louder Than War and if that’s anything to go by, the rest should be pretty bob on too.

The intention is to  present the most vital aspects of the genre, not just gurning guitar wankery and caterwauling blues divas who often fill the bills of blues festivals. The line up celbrates  the cross-pollination between the blues and other musical forms,  championing  variety and diversity, and honouring the past while shimmying, Fantastic Negrito style,  towards the future.

As John Lennon once said “The blues is a chair, not the design for a chair, or a better chair… It is the first chair.”   Future Juke intends to present some of the finest chairs the blues world has to offer.

Fantastic Negrito won the 2017 Grammy for Best Contemporary Blues Album. He is one of the most electrifying stage presences you will ever encounter. Chris Cornell personally asked him to be opening act on his final tours. Cambridge Folk Festival wondered what had landed when he  owned the main stage in 2017. His new album Please Don’t Be Dead, is previewed here and the London date is part of a set of UK gigs that kick off in May

We’ll be covering both the album and the tour but anyone in the capital on 1 June would be missing something spectacular when he teams up with Miraculous Mule, a power trio who have revitalised British alt blues-rock, Classic Rock labelling them as  “lashing voodoo grooves to a Delta moan, sounds like it was concocted by a post-modern chain gang.”   Another favourite at Louder Than War,  their Tonne Testimony album (reviewed  here) was a revelation.

Legendary actor/director Steve Buscemi says of Jake La Botz – “He is a true American classic, and a musical resource that is a joy to be discovered time and time again.” Need we say more? The Chicago-born bluesman is a deeply compelling performer who learned at the feet of blues pioneers David ‘Honeyboy’ Edwards and ‘Homesick’ James.

Back up for La Botz comes from chanteuse extraordinaire, Annie Bea, of Rotten Hill Gang and Fjokra. Equally at home with punk, funk, prog and jazz – blues seems a natural home for her smokey tones.
Eli Paperboy Reed is latter-day soul-blues don. He honed his skills in Mississippi jukes and Chicago gospel choirs. He has the voice of a classic 1960s R&B belter and superb guitar and harmonica skills to boot. He is joined on this occasion by the wonderful, 10-piece Mighty Brass Band.

Jerron Paxton delves into the deep history of African-American musical traditions and breathes new life into them. An audience with Jerron is a profound education and a joyous entertainment. He was a highlight of the BBC’s recent American Epic documentary series and is a legend in the making. His opening act Garry ‘Slide-Guy’ Smith is one of the UK’s very best steel guitar players and a witty, moving songwriter. 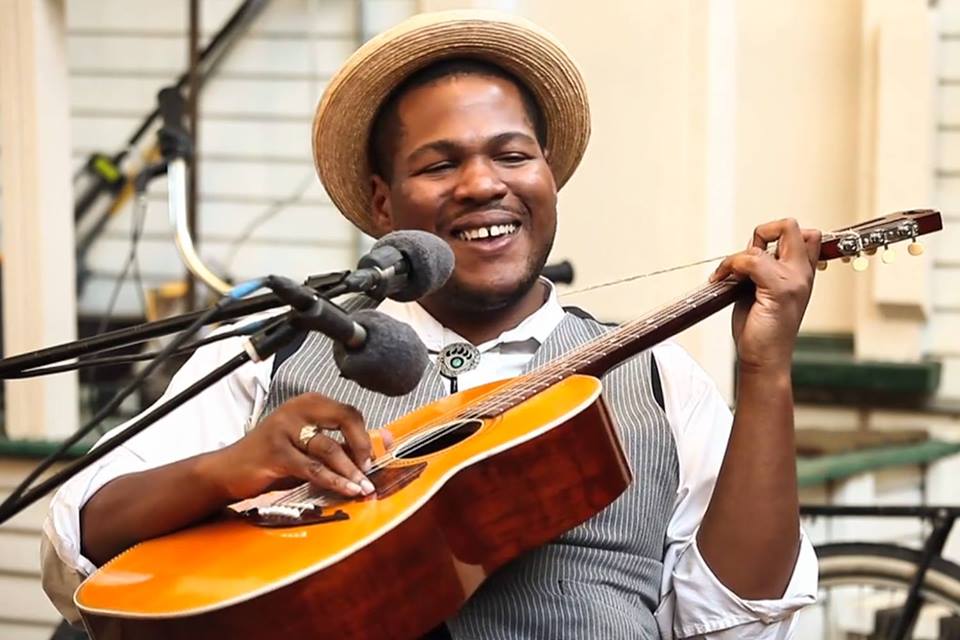 In another moment of enlightenment,  we were massively knocked out by Aidan Connell’s Grio album (reviewed here ).  Aidan Connell, Husky Tones and Mudlow represent different strands of the vibrant British alt.blues-rock scene. Connell’s guitar pyrotechnics and scintillating brand of garage-psych has graced stages with Gary Clark Jr and Iggy Pop.  Punk-blues duo Husky Tones make a beautiful racket in an explosion of boy-girl rock ‘n’ roll alchemy. This is the London launch of their excellent I Don’t Give A Damn Anymore EP
while Brighton-based Mudlow’s dusty, gritty Americana is evocative and enthralling.