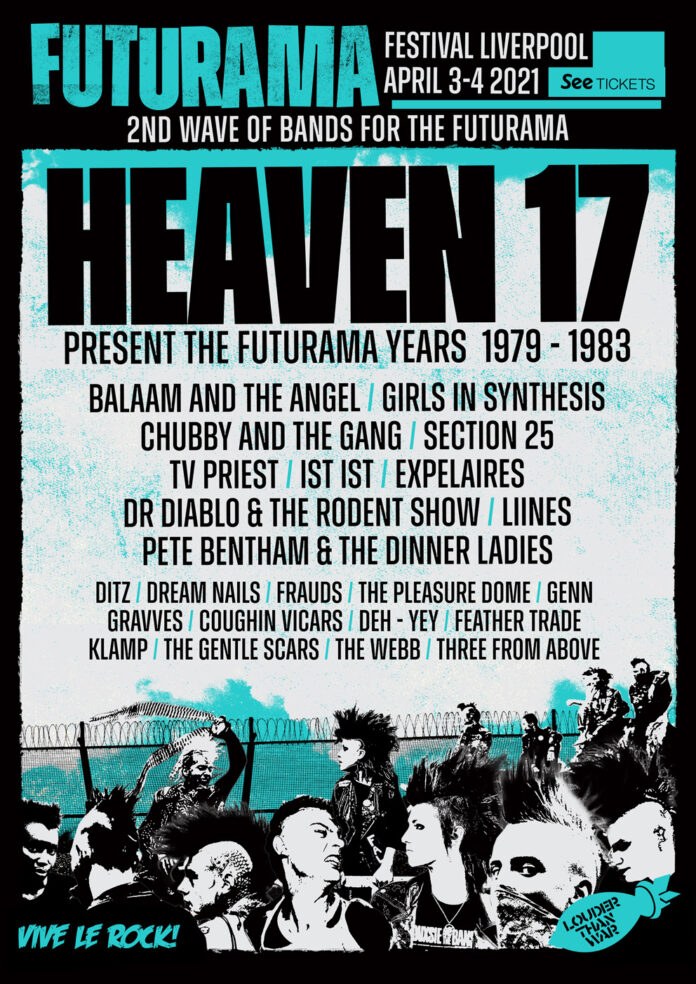 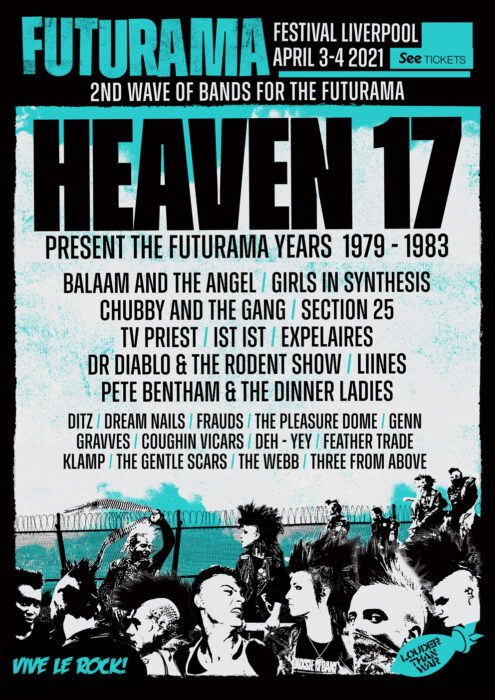 Futurama, the legendary post-punk festival is back after 40 years and takes place at the Invisible Wind factory / Make Arts Centre and Ten Streets Social in Liverpool over two days, 3rd and 4th of April 2021.

With promising news on the horizon regarding the vaccine roll out this week, the Futurama Festival’ has announced a second wave of bands to play the influential festival in Liverpool next Easter.

Undoubtedly one of the most famous electronic & synth bands of all time, Heaven 17 had hit after hit back in the 80’s with their incredible albums ‘Penthouse and Pavement’ and ‘The Luxury Gap’. This extraordinary success means their gigs are as popular as ever and they consistently sell out shows in the UK and abroad. The original Human League split in 1980, when Martyn Ware and Ian Craig Marsh left to set up their BEF production company and recruited Glenn Gregory to help create “music of quality and distinction”. Taking their name from the disco in Clockwork Orange, Heaven 17 had immediate success with hits such as ‘At the height of the fighting’, ‘Fascist Groove Thang’ and ‘I’m your money’. ‘Penthouse and Pavement’ would become a landmark album that defined the 1980’s.

For their unique performance at the Futurama, Martyn and Glenn will perform a Heaven 17 set and will also revisit some of those classic early Human League songs. By re-imagining them and keeping the original spirit, they hope to recreate the futuristic ambience and immersive atmosphere of the early days. As Martyn says he ” loved the wider theme of dystopian science fiction that the Futurama touched upon and he always envisaged the Human League growing up in a science fiction noisescape”. Human League were scheduled to play the original Futurama in 1979 but for one reason or another, it sadly never happened.

As well as Heaven 17’s back catalogue, Martyn Ware can call on the astonishing early records of the Human League. The first Human League albums ‘Reproduction’ and ‘Travelogue’ were two of the most influential synth albums of all time. It cannot be underestimated how important the sound of young Sheffield 78 -83 became in post punk Britain with the Human League, Cabaret Voltaire, Clock DVA and Vice Versa(Later ABC) leading the way. They were the first wave of British bands to mix machines and electronic noise. Their music reflected their environments, the urban decay and industrial decline of this period.  A bleak but beautiful soundtrack.

“Heaven 17 are really looking forward to the Futurama show, it holds so many fantastic musical memories for us both as performers and audience, states Glenn Gregory. “It’s fantastic that we have the chance to be a part of the future of Futurama”

“Brothers, sisters don’t just sit there on your ass!” Join us as we fix this historic error and go back to the Futurama with Heaven 17

Peter Hook and The Light are the Sunday night headliners and will be performing the ‘life changing’ Joy Division set from the 1979 Futurama in Leeds for the first time in 40 years. Another world first for the return of the Futurama in 2021. Peter Hook and the Light as well as the historical set will back it up with all the classics that they have delivered across the world in recent years to such acclaim. Two very special headliners for the return of the Futurama. They are joined by legendary Factory band Section 25 and the Expelaires who played the first Futurama in Leeds in 1979.

The AF Gang have confirmed their first acts for their All Is Love / Goth Kitchen stages with up-and-coming London punks Chubby And The Gang who have just signed to Partisan Records (Idles, Fontaines DC, Laura Marling) and TV Priest who have just signed to legendary American label Sub Pop. Other bands they’ve picked are Genn, The Pleasure Dome, Ditz & Frauds who the AF Gang have been championing for some time.

Planet X, Liverpool’s infamous goth and punk club have Balaam & The Angel headlining its stage with Dr Diablo & the Rodent Show, Peter Bentham & The Dinner Ladies, Feather Trade,
the Gentle Scars,  Three from Above & The Webbsupporting. Also, confirmed are Girls in Synthesis, Ist Ist, Dream Nails, Liines, Gravves, Klamp, Coughin Vicars & Deh-Yey.  All in all, it’s shaping up to be one of the best line-ups of every year.

As promoter Marc Jones, says ‘fingers crossed, the timing could be perfect, we all desperately need something to look forward to after one of the hardest and most difficult years ever! 2020 has seen the festival and live gig circuit decimated by the pandemic. It could one of the first festivals post Covid restrictions and it would be a real boost to the Liverpool music scene and the independent venues involved and perhaps a real starting point for and hopefully a much better year in 2021″

There will be a last wave of bands to be announced in January when day splits and full stage line ups will be announced.

For more info head to: futuramafestival.com