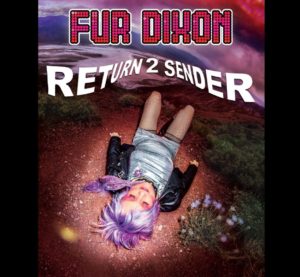 On the eve of releasing her debut album, Return 2 Sender, with new band WTFukushima, Fur Dixon talked to me about the album, new band and touring with The Cramps. UK fans have a chance to catch the band live during their upcoming tour in July, which takes in dates in London, Newcastle, Edinburgh, Middlesborough, York and Brighton. Fur is a respected American musician, probably best known for playing bass with the legendary American psychobilly/punk band The Cramps on their “A Date With Elvis” tour. Her band, WTFukushima is a real-life supergroup, featuring The Sonic’s Dusty Watson on drums, The Fuzztones Bernard Yin on guitar and Dave Provost from Dream Syndicate on bass.

Fur, thanks for taking the time to answer some questions.

You have your album Return 2 Sender coming out at the end of the month. Tell me a bit about the album – inspirations, favourite tracks, the sound?

FD: Sound: I was surprised to hear my teenage 1970’s rock & roll radio backdrop pop up all over this record. I grew up humming catchy rock n’ roll guitar and bass riffs. There’s plenty of those on Return 2 Sender. I love weird sound effects and ear candy, catchy hooks and melodies. There’s imagery… amusement park roller coasters, fun houses, the Atomic age and the Cold War all which had a big impact on this kid.

Favorite tunes: I love them all, I don’t think there are any clunkers on this album. Get That Saddle Off My Back-is one of my personal anthems. Out of Darkness Slowly-feels like a 70’s amusement park vampire rocker. My Baby Go Diving- written when I had a summer flu. It’s Bo Diddley inspired, altered by a jungle fever! Surf guitar legend Dave Wronski plays a mad solo on this tune. Sugar Sweet may get you knocked up, it did for me anyhow. I love Buffy Saint Marie’s Cod’ine. That and Brian Eno’s Baby’s On Fire are two tunes I picked when i realized I could make this record and put whatever I bloody well wanted to on it!

The band is like a roll-call of the great and good of garage rock – featuring members of The Sonics, Fuzztones and Dream Syndicate. How did the band come together?

FD: I dreamed it up. How else could I have ever planned a band this great? Dave Provost has been my friend since the mid 80’s. He showed up after almost 30 years to my backyard party in 2015, axe in hand and ready to play. I put a little band together for that one night to see if getting back into R&R would be a fun thing to do. I played bass that night, but decided to move over to electric guitar in order to be able to put on a better live show. Dave, who is a fantastic guitar player in his own right, graciously offered to play bass in our band. Between Dave, and Dusty Watson on drums, I have a rhythm section made in heaven.

Dusty—I saw him play with the Sonics in May 2015. They were so incredibly good, and loud! I said “Yep, I want THAT drummer.” Dusty is one of the best I have ever seen or played with live, in my life. It took me seven or eight months to get up the nerve to ask him to play on the album. He agreed. We had one rehearsal and then the next week we went in and recorded the basic tracks!

Bernard Yin was referred by Dusty and Paul. We had to wait 6 months for Bernard to record on the album since he was overseas playing in Spain. Bernard knocked out his guitar parts in 2 quick and dirty sessions. I swear he makes his guitar playing look easy.

Paul Roessler on keyboards added a cinematic edge to the tunes he played on. Paul and I also discovered that we make a great backup vocal team.

Paul, Dusty, Dave and Bernard are just genius and intuitive musicians. Jack Ruby, my sax player from the Whirlybirds and Hollywood Hillbilly’s days, came back into my life and his brilliant playing is all over this record too.

Fur has a varied background in the US music scene. I wanted to find out a bit more about her and her time with The Cramps.

When did you first pick up a bass guitar?

FD: I started playing bass in 1982. I was singing in my own band, working a full-time day job, and a part time job at night. Overdoing everything, partying a lot and sleeping little. NoDoz (caffeine pills) were my drug of choice to keep me going. I was run ragged, not eating much, skinny as a bone. After the last rehearsal before our first ever little dive-bar gig in Pasadena Ca, I blew out my voice and ended up having laryngitis for SIX MONTHS. I was so run down I couldn’t even get a creak out to sing along with the radio. I was desperate to play music, so I decided I could probably learn how to play bass. I did it by playing along with old records, 50’s R&B and lots of rockabilly. Within a year I was playing bass on the road.

People here may know you best from playing live bass with The Cramps, touring the UK with “A Date with Elvis”. It would be remiss of me not to ask based on recent events with the death of Nick Knox, so what was it like working with The Cramps? Tell us about your highlights from your time on tour with The Cramps, what are your memories of Nick?

FD: It was a wild ride. Many extraordinary things happened worth writing home about, I have a book and it’s almost finished. Nicky is right here in the middle of my heart, his funeral is today and I’m really crushed. That’s all I have for now.

After the tour you were asked to remain as a permanent member, why did you decide against that?

FD: The word was “control.” They wanted it, I wouldn’t give it. More about that later. 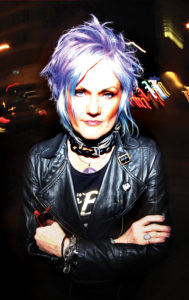 You have had a varied career playing in a number of rock ‘n’ roll bands (The Whirlybirds, The Hollywood Hillbillys, The Dixons, Blow Up…) but before you formed WTFukishima, you were an established folk/Americana artist. How did that change of direction come about, and what brought you back to surf guitars and rock ’n’ roll?

FD: I needed a complete change in music and lifestyle direction. In fact, I never expected I would be back playing rock n’ roll ever again. There were bad memories, dead ends, sorrow, death, all piled up inside my soul, I needed perspective and had to get my life together. I became a mom in 1990 which sent me on a much better trajectory. Many years and a lot of water under the bridge, I was able to make peace and own my past in a way that’s comfortable. And, it’s all mine.

As well as the album, the band are touring the UK in July.

Fur Dixon fans in the UK will be looking forward to experiencing the band live with upcoming dates (below) in July. What can they expect from the shows?

FD: During the past two years while this album was being made, we played live shows and got to know each other onstage and off. That has helped us a lot to prepare for our tour of UK and Spain in July. We’re playing 16 show in 17 days! The audience will get a full tilt rock n’ roll show with thrills and chills. That’s how we do it. Please do come, we want you!

There may be a couple of Cramps covers in the set too. Just saying…

You haven’t toured in the UK since the dates with The Cramps – what are you personally looking forward to about these shows?

FD: Oh my God, there are so many friends I’ve made on FB from the UK over the past decade. They knew me back in the day and they must have kept a little flame alive waiting for me to come back, because here we come! I will be so happy to finally meet them, now. The shows we play will be for all the old and new friends and as a tribute to Nicky Knox. 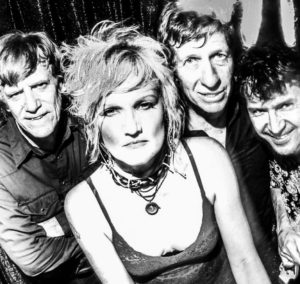 And so to the music. Return 2 Sender is the sound of jubilant celebration and impassioned longing. The album switching seamlessly between full-on surf/garage rock’n’roll stompers and smouldering torch songs. While Fur’s flambouyant Cramps stage image has change, the shocking pink hair has been replaced with purple and the pink-fur lined outfits are gone. She still looks and sounds every inch the star.

From the opening glam stomp of Sugar Sweet, to the searing garage surf guitars on the album closer Safari Road, the ten tracks reflect Fur’s varied background and the influences brought by the band.

Fur has the silken voice of an angel which is showcased perfectly on If I was Free. On tracks like Daydream Walking, it reflects her most recent roots/Americana background, with Bernard Yin providing the perfect blissfully dreamy 50’s guitar soundtrack.

The album holds yours interest with the listener hanging in anticipation of where the next song will take you. The different tempo, depth and range of the songs – from the ballad-like longing on the aforementioned If I Was Free to the fervently impassioned and despairing on Buffy Saint Marie’s Cod’ine and the feverish rock ‘n’ roll and bold gutsy assertiveness of Get That Saddle off My Back – allows the band to display their wealth of talent. The perfect intricate instrumentation from the band, often delicate, frequently intense but always powerful provides the perfect foil to Fur’s voice.

Elsewhere there are elements of sultry surf-garage guitars a-plenty, squally sax and throbbing bass on My Baby Go Diving and Baby’s on Fire. While Fur’s range allows her angelic vocals to shine and soar on the likes of Morning Comes, No Warning and mixes things up on songs like Baby’s on Fire ramping her vocals up to a sneer to reflect the more aggressive in your face style of the tracks. The blisteringly incandescent fuzzy garage guitars rise to a crescendo for intense final track Safari Road leaving an immense feeling of fulfilment but still wanting more. Enough to listen again.

The album comes out at the end of June (27th), with live dates following in July starting in London on the 12th.

Finally, I asked Fur. what does the longer term look like for WTFukishima?

FD: We are gaining momentum and will hopefully return to the UK again, before or at the top of 2019. We live to play and plan on doing it as much as possible. We’ll also begin recording our next album in the next few months. The new songs are even more raw and rockin’.

Thanks so much to Fur for taking time out to answer these questions.

All pictures courtesy of John Nikolai