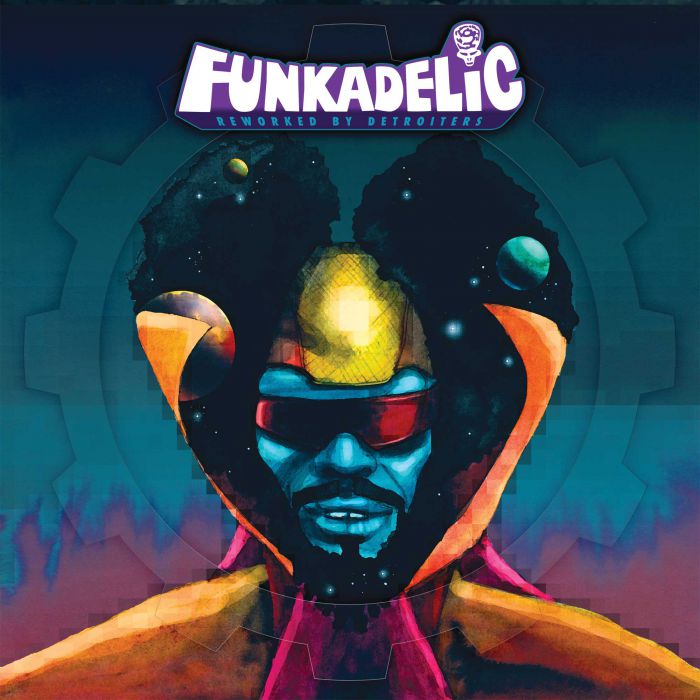 Funk pioneers get in depth and devotional remix treatment from Detroit’s finest.

Still going strong at the ripe old age of 76 years old, George Clinton’s P-Funk mob have done pretty much everything in music. His bands Funkadelic and Parliament invented funk rock and he has gone on to be one of the most sampled artists ever (if not the most sampled).

Artwork for this release comes from Abdul Haqq of Third Earth, the most prominent visual artist in Detroit Techno today. He created defining works for Derrick May’s Transmat, Underground Resistance and Drexciya among others.

As a huge Funkadelic fan, I was sceptical of this release. It contains’ a diverse selection of remixers from today’s generation of Detroit producers and musicians, looking back at the immense legacy of Funkadelic and re-imagining it for now, with the re-interpreters chosen to prismatically represent the vastness of Funkadelic’s genre-bending music.’ This description from the album’s liner notes is a good quick capsule review. This is not all remixes for or by DJ’s etc. There is meandering funk jams, punk rock heaviness, tripped out journeys in music, techno monstrosities and a whole lot more.

Each of the songs on this set are from Funkadelic’s Westbound Years (1968-1976). With that in mind there is no (Not Just) Knee Deep or One Nation Under A Groove in amongst the songs. Funkadelic’s acid heavy debut is represented in two contrasting, but ultimately stellar remixes of Music For My Mother. Stylised as Music 4 My Mother (Underground Resistance Mix) is a foot stomping, tough acid funk smasher of a track Underground Resistance co-founder Mike Banks used to play guitar with P-Funk in the 80’s. This remix uses the classic vocal ruminations and vocal melody line but throws them over a beat stacked with hand claps that harks back to Clinton’s Atomic Dog.

Sexy Ways is transformed into a slinky disco number by the mind of Recloose. The remix doubles the length of the original track and along the way provides a top notch beat that bounces along to create a completely triumphant dancefloor tune. Alton Miller’s take on You Can’t Miss What You Can’t Measure is a spacey, sun kissed jam. The hypnotic bassline of the track is still front and centre but the gospel style backing vocals and lamenting lyrics are given extra prominence in the mix. Another remix that oozes sex appeal is Gay Marvine’s remix of The Undisco Kidd. Again, this would triumph on the dancefloor; the BPM is increased and it swishes seductively as Clinton’s great lyrics show how much of a genius the man actually is. This is also true of Amp Fiddler’s disco-style mix of Lets Take It To The Stage which utilises the original guitar sound expertly.

Cosmic Slop is still a fixture of the current incarnation of George Clinton’s intergalactic world. On this collection, Moodyman stretches out the original in the way that Tom Moulton put his mark on so many classic from Philadelphia. The track builds wonderfully, superbly allowing each aspect of the song to come to the fore before the drums erupt and carry the track along. The highlight of this mix however is the prominence of Garry Shider’s amazing vocals. The guitar solo is pulled back from the mix in favour of vocals, stellar drumming and shimmering keys.

To mix up the more dance oriented material here, Detroit punk band, The Dirtbombs have taken Super Stupid and amped it up even further – if that is humanly possible. The original is a deep cut from Maggot Brain that along with the albums titled track, was like Eddie Hazel’s calling card. The undulating bass and drum rolls as the guitars are swamped with feedback to create a wall of noise.

Claude Young Jr contributes two different mixes of another Maggot Brain classic; You And Your Folks. The first is a straight up club track, whereas the other mix is a dub mix of the track. The club mix takes on a sinister tone with dark techno vibes taking the place of the vocal line. This is a track that should be played in the small hours in a dark, dank club; absolutely brilliant.

This whole set is a labour of love for the contributors; this is clear in some of the song selections. There are some curveballs here; none more so than the inclusion of Let’s Make It Last and Looking Back At You. There is a dub mix of Maggot Brain that is no too dissimilar to the Alternate Mix included on Maggot Brain’s reissue from several years ago. For me, Maggot Brain is perfect in its original form and shouldn’t be tampered with!

As a collection, this is a worthy addition to any P-Funk discography. Some remixes miss the mark a little but most are fantastic remixes that have clearly been perfected due to a love of the band from this set of inventive musicians.

George Clinton and Parliament Funkadelic can be found online here. They also have Facebook and Twitter pages.