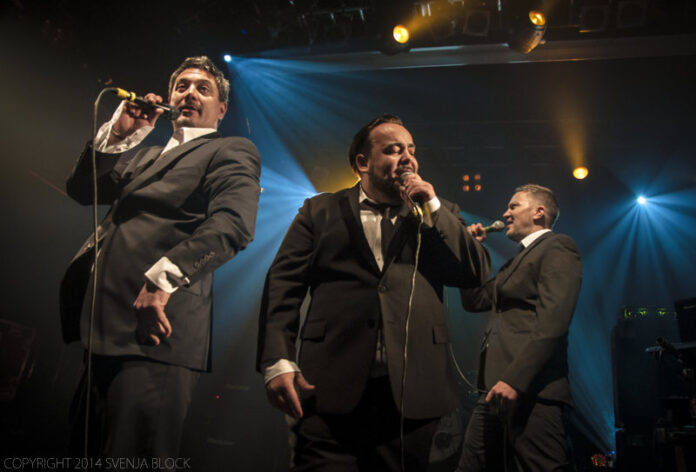 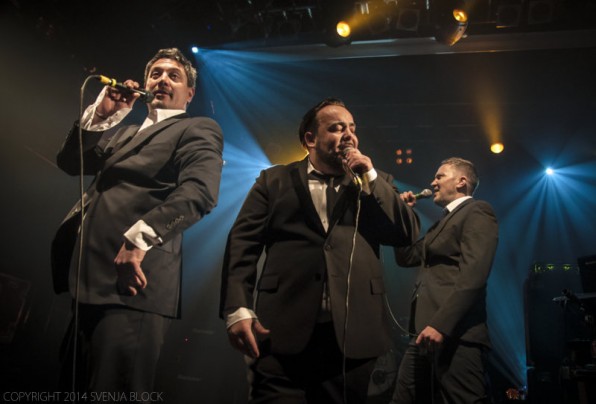 Fun Lovin’ Criminals were out in support of their new live DVD, The Bong Remains The Same, last weekend. Could the band put on a special show for a special venue? Louder Than War’s Dom Walsh went to see. With photos by Svenja Block.

“Who’d’ve thunk it … us … in a church,” chirps FLC’s ever charismatic front man Huey Morgan. A sentiment probably echoed by many as the FLC ripped through a hundred minute set that mainly paid homage to the bands very fruitful mid to late nineties period. 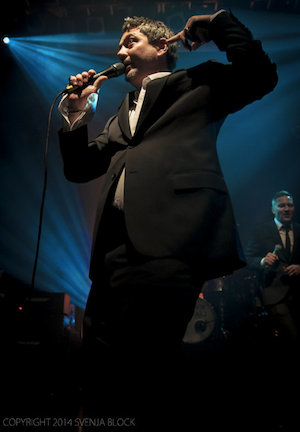 The band bounded onstage and opened with an almost Beastie Boys style take on Bear Hug, with the threesome all on mics, rapping. As the band took up their instruments, they eased the congregation in with a slick version of King of New York. What followed was a large run of songs from 1998s 100% Columbian. Southside was a joy to hear after so many years with its straight up hard rock beat and beefy riffs. Huey’s guitar work on All For Self was reminiscent of a Maggot Brain era Eddie Hazel. After two mightily heavy tracks, the band slipped into lounge mode for Back on the Block before a disjointed (due to technical difficulties), Loco. The band held everything together with their unparalleled stage shtick, entertaining whilst Huey’s guitar was sorted out. Huey wanted to preach; Fast wanted to play songs!

Due to a slight hitch it seemed that the band bumped Scooby Snacks up the set to reinvigorate the energy into the set. With a tune so well known, it does just the job before another trawl around the late 90s. Up On The Hill still sounds as fresh as it did over 15 years ago, and I Can’t Get With That saw Huey again in full shred mode … and boy can he shred when he wants. 10th Street again allowed the band to have a go at shaking the foundations with heavy riffs and blaring sirens. A brief trip to 2010s Classic Fantastic for the title track of the same album is received well. The band closed up their main set with a crowd sing-along, Big Night Out, and the more ballady Will I Be Ready from Livin’ In The City.

As the band returned for the encore, there wasn’t a whole heap that they had left to play in terms of crowd pleasers, but Bombin’ The L and Love Unlimited do just the job. Bombin The L’s heavy Deep Purple-esque opening was furious and Love Unlimited Barry White homage is almost hymnal in the surroundings of the austere Manchester Cathedral.

The closing salvo of Fun Lovin’ Criminal was truly euphoric. Some songs are always going to sound great no matter where they’re played, and this is one of them. The mini Led Zeppelin breakdown into Whole Lotta Love is apt considering the band have just released a new DVD by the name of The Bong Remains The Same.

When all was said and done, Fun Lovin’ Criminals are no mugs. They know how to work a crowd in any environment. Whilst they’re not slaying the Pyramid Stage at Glastonbury anymore (see 1999), they have a solid fan base that are always going to revel in the band’s manner and catchy songs.

All words by Dom Walsh and photos by Svenja Block. You can read more from Dom at his author’s archive here and see more of Svenja’s photos at her Flickr or on Facebook. Dom also tweets as @bwfcdom83.