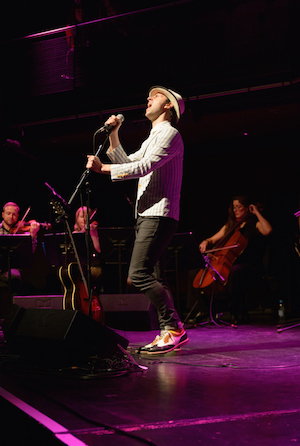 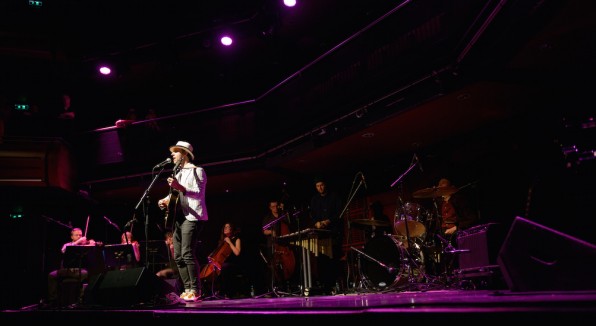 An excellent evening of music, laughter and all round tomfoolery provided by two of the most-loved musicians in the North East. Louder Than War’s Lee Hammond is bowled over by them and their band of fantastic musicians.

The Sage is awash with people this evening, in the week that sees the wonderful venue celebrate its tenth birthday. The whole venue is filled with excitement and this is extended to this evenings Hall Two show, where local darlings of the music scene Paul Smith and Peter Brewis bring their wonderful new project Frozen By Sight.

First up though is Emily Portman, taking to the stage alone we gaze on in awe of her beautiful voice. She has the most beautiful songs with what can only be described as slightly off beat subject matter, with songs about Welsh caves and the North East coastline.

We were treat to a whole barrage of new songs by this beautiful songstress to, a perfect opening to this evening of music. Paul Smith and Peter Brewis arrive on stage with a stellar cast of musicians, flanked by Peter’s brother David on Drums Field Music bassist Andrew Lowther on percussion and a five-piece string section.

Paul is quick to announce that they’ll be playing Frozen Sight in order; they begin in the North East with a song about Newcastle’s Old Odeon cinema. Paul takes time to explain the story behind each of the tracks and the destination that they’re taking us to next.

There are a number of exotic destinations featured in tonight’s set, whether we’re in Barcelona or Budapest, Los Angeles or Santa Monica. It is a collection of songs about some of the most exciting places on the planet flanked by places that are close to most of this audience’s hearts.

However, what really stands out this evening, is the band’s brilliance coupled with Paul Smith’s natural showmanship. His natural delivery with his North East twang is always a pleasure to hear, though at some points it seems to descend into something altogether different.

Smith ventures off on a tangent numerous times, whilst hilarious it does detract at points from the beauty of the music. That said, there were a number of brilliant anecdotes, it has to be said that Frozen By Sight is a million miles away from their individual outputs. Whilst being a serious piece of music, they inject a real sense on fun into the evening.

To close out this evening they stray into Paul Smith’s solo work with a re-worked version of the utterly brilliant While You’re in the Bath. Having seen the original Sage performance and this evening, the whole project has changed whilst the songs remain the same. The band are more confident the air of trepidation and the unknown removed allowing everything to be that little bit more exciting.

Frozen By Sight can be found online here: frozenbysight.co.uk. They’re also on Facebook and they one of them tweets as @paulsmithmusic.