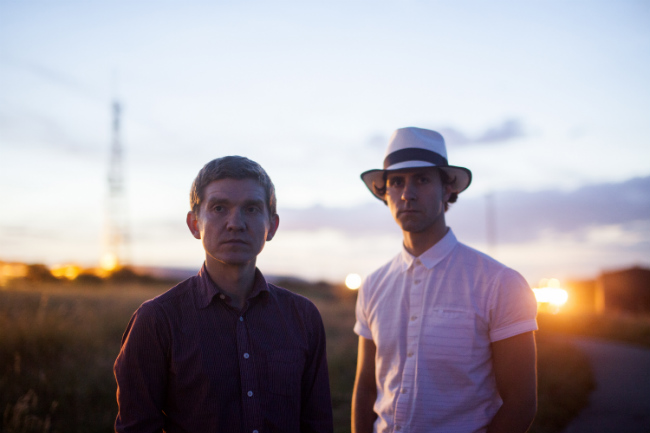 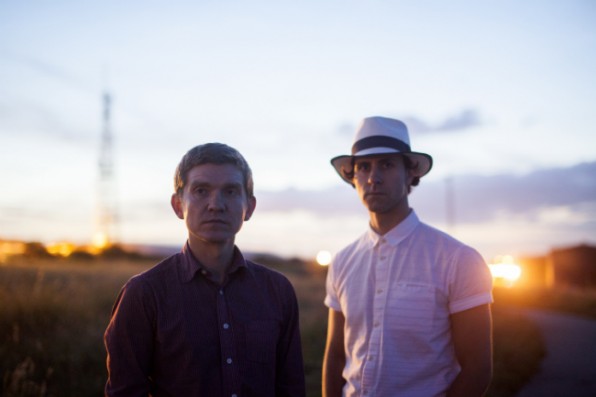 Lee Hammond wanted to find out more about  about Frozen By Sight, a collaboration between Paul Smith (Maximo Park) and Peter Brewis (Field Music). So he sent the former a set of questions, the answers to which can be found below.

Sometimes we all need a change of pace … cue Paul Smith and Peter Brewis. These musical chameleons have come to the table with something incredibly exciting, a collection of songs based upon Paul’s travel writing backed with Peter’s wonderful compositions. Accompanied by an insanely talented group of musicians, albeit late to the table, Frozen By Sight has crashed into my personal top ten albums of the year.

We catch up with Paul prior to a few tour dates in support of this wonderful display of music. Find out what he had to say after the video for Los Angeles Street Cleaner.

Louder Than War: Firstly can I say Frozen By Sight is a beautiful album, one of my personal favourites, how was the project conceived? Was it a mutual meeting of minds or did one of you approach the other?

Paul Smith: Thanks! At he back of our minds, I think we had always intended to work with each other at some point but we didn’t know what form that collaboration would take. I was asked by an event called the Festival of the North East if I had any new ideas for a commission, which was when I approached Peter. I had lots of words that were very descriptive, which I had noted down on my travels. I wanted to share them with people but wasn’t really sure what form that would take. Knowing how good Peter is at string arrangements I thought it would be good to incorporate his arrangements into a new piece of work. Peter came round to my house and we played each other some records that we liked, and that we thought would be a good starting point for a collaboration. We decided that the lyrics would be the impetus for the music and, rather than shoehorning the words into set pieces of music, we would allow the music to be more flexible. I began to write on my guitar and send the music to Peter. Likewise, he would send me bits of music that he thought suitable.

How do you feel Frozen By Sight differs from your individual offerings?

I think we both wanted to get away from being in rock bands for a short while, especially because our interests are wide ranging and it doesn’t make sense for us to just pursue one type of music. Maximo Park’s aim is to write emotionally-driven pop songs that deviate from the norm whilst retaining key aspects of a traditional structure. With FBS, the songs are still very melodic, but the structures edge towards classical or jazz or even what used to be called ‘post-rock’! I’m more of an impartial observer on this new album, which is not to say that I’m detached, but there’s an objective viewpoint in the songs. I like using words to interpret the world around me and a lot of the lyrics on this album would never have fitted into a Maximo Park song. Having said that, there is a link to the band in terms of celebrating the everyday within the music.

How have fans of your individual work reacted to Frozen By Sight? Do you think its opened up a slightly different demographic?

I hope so! Because the music is a bit different to what we normally do there will be a number of people who might appreciate this record who aren’t into our respective bands. The task is to get those people to hear it! Close listeners of Maximo Park will know about my personal taste and will see the connection between what I’ve done before and what I’m doing now, which is confirmed by some of the nice reactions I’ve been getting. The pessimist in me thinks that a lot of people won’t ever listen to it because they are put off by the concept but there’s nothing I can do about that! It’s quite a refined record so I think Field Music fans will have less difficulty bridging the gap between the two.

Can we expect to see anything out of the ordinary from the run of upcoming dates?

Putting a nine piece band, including the string quartet, onto a small stage is pretty extraordinary, especially financially! Aside from logistics, we’ll try to play the album as accurately as possible because one of its main appeals to us was the sound of the ensemble we chose. We may even tackle an extra song as a special treat for the live audience but we haven’t decided yet…

Having been at the original Frozen By Sight launch has much changed since that night? To my ears the songs seem to be a lot fuller now, have they evolved much during the recording process?

Not really, although I’m not sure I played everything correctly that night so I’m sure some parts were missing! Apart from the vocals, the album version of Budapest is the one you heard at the Sage. We recorded the whole concert for potential album usage but decided to record everything else from scratch after listening to it. Peter altered some of the string arrangements in retrospect, but everything else is pretty much the same. The rehearsals and concert became our pre-production period, essentially.

On the understanding that the majority of the lyrics are based around Paul’s travel writing, can I ask what inspired ‘A Town Called Letter’?

I was travelling on a train across Europe, probably from Germany to Paris, when I wrote down the phrase in my note book. I thought it was a romantic name for a place, but when I came to try and find it on the Internet there wasn’t really anywhere that fitted the name apart from an obscure area near an industrial estate. Maybe I made it up or maybe the train passed this tiny place. Anyway, the rest of the song is about feeling alienated in a city that’s not your own, but which feels familiar in terms of how people act late at night.

The lyrics were written separately over the course of a few years. Until we made the decision to use them as the basis for a set of songs, I’d never tried to set them to music. We each wrote roughly half of the music that you hear on the record; my contributions being written on guitar with the words in front of me, leading the compositions. These bare sketches were then hugely enhanced by Peter’s string arrangements. Peter’s own music was often quite fully formed when I first heard it, but luckily my words fitted nicely. I would try and select words from a specific place that somehow matched the mood of Peter’s music.

It’s evident that your travels have influenced this record but how does the North East and your day-to-day surroundings influence your music?

Well, the record begins and ends in the North East, which was very important to me. I didn’t want the album to be evocations of only exotic places. In some ways the location is irrelevant to what is going on in the lyric and the scene depicted, but perhaps when I’m travelling I am more aware of my surroundings. That idea of being hyper-aware of where you are is an ideal scenario that I try to extend to my day-to-day experiences, although that’s not realistic! I look upon my home as quite a romantic place, yet very down to earth. When people idealise places like New York or London via a songwriter’s lyrics, I sometimes think to myself, “why couldn’t listeners do the same thing with the north-east of England?”. That informs my writing to a small extent. Some of my favourite artists, like the poet Frank O’Hara, depict what others might deem mundane and create something artful, exciting and accessible.

In terms of the vibrant music scene in the North East, whom should we be looking out for aside from the obvious?

I’m not necessarily the best person to answer this question because I don’t go to a lot of small concerts unless it’s a touring band or a friend playing. So, on that basis, Silver Fox, Warm Digits, Slug & Les Cox Sportifs are all brilliant bands with my friends in them. I also like a band called Brilliant Mind who’ve been around for a while but recently got back together. If you like solo guitar-picking, then Horse Loom is excellent, too.

Is there also anyone further afield that we should be keeping an ear out for?

A couple of my fave albums this year have been by Fear Of Men and Ex Hex. Female-fronted independent rock!

What does the future hold for Frozen By Sight? Are there any immediate plans for new work from your multitude of other guises?

I certainly hope we can collaborate again but our other bands will inevitably mean that will happen in the distant future. Field Music are hoping to do more with their soundtrack of the John Grierson documentary, Drifters. Peter and David Brewis are both playing with Slug who will release their debut album on Memphis Industries next year. I’m hoping to start writing with Maximo Park again soon and I’m finishing a new solo album of upbeat alternative-pop songs. Hopefully, I’ll put that out next year.

One final question as the year draws to a close; can you both give us your album of the year?

Frozen By Sight are heading out on a mini UK tour this week!