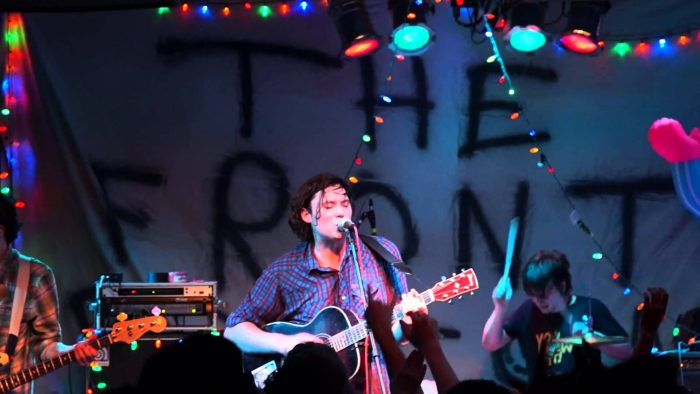 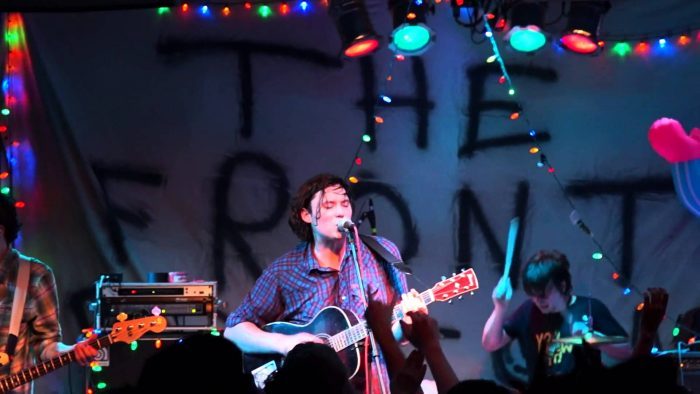 New Jersey’s The Front Bottoms return to Manchester with a coming-of-age show at the iconic Albert Hall. Louder Than War’s Dave Beech was there.

A little over a year ago I reviewed The Front Bottoms’ previous UK tour. The New Jersey-based trio played Manchester’s O2 Ritz as part of their Back On Top tour – a choice of venue I was slightly sceptical of given its capacity. Thankfully my scepticism proved unfounded, and the band went above and beyond in delivering what was arguably one of the best shows of 2016, right at the end of the year.

With that in mind, that they should tonight be taking to the stage at The Albert Hall feels like a fitting and welcome progression, while the fact they’re bringing everyone’s favourite Aussies, The Smith Street Band, along for the ride with them makes this another contender for show of the year once again.

Opening the night are fellow New Jersians Brick + Morter. A genre-bending two-piece that combine samples with guitars, bass and drums and various costume changes, it’s a set that seems to divide tonight’s crowd. Those front and centre, though at first taken aback by the duo’s eclecticism, get on board quickly, and as the band tear through tracks such as ‘Locked In A Cage’ and ‘One Little Pill’ it isn’t long before more than a handful of the crowd are dancing along. It does appear to be the younger members of the audience that Brick + Mortar resonate with however, as those of us in to our third decade or more look on bemused.

A band for whom headlining their own shows around the world is a regular occurrence, Melbourne’s The Smith Street Band were in Manchester just a few months ago in support of their most recent album, More Scared of You Than You Are of Me and it’s this album that forms the backbone of tonight’s set. Opening with a rip-roaring rendition of ‘Death to the Lads’, it’s obvious that the band enjoy what they do and appreciate the opportunities they’re afforded, with frontman Wil Wagner complimenting both the crowd and the venue’s stunning interior. Their ten song set is over far quicker than one would like; an anthemic ‘Throw Me in the River’ bringing an end to the proceedings all too soon. And as Wagner thanks the crowd before leaving the stage, it’s difficult not to feel touched by the solidarity and catharsis that The Smith Street Band provide.

One of the best examples of just how quickly a band can progress though a city’s venues, The Front Bottoms have gone from strength to strength with each album’s release. In what proves to be a testament to the band’s ever-widening appeal, the crowd on the venue’s ground floor erupts as soon as the band take to the stage, while those who prefer comfort over chaos (read: older) are perched on the balcony, lamenting the fact that most of us are probably a little too heavy to crowd-surf ever again.

With a set that spans the entirety of the band’s career and a massive 21 tracks, it’s impressive to see just how far the band have come; the spray-painted bedsheet backdrops of early gigs replaced now by something less DIY, while the music itself feels fuller, and more encompassing. Of course, fan favourites such as ‘The Beers’ and ‘Maps’ are more than welcome inclusions, but it’s the new material that really exemplifies where The Front Bottoms are at today. And though much of their music is hinged on anxieties and uncertainties, they carry themselves with a sense of confidence that’s evident both in their stage presents and those tracks taken from last year’s Going Grey.

Closing the main set with an anthemic outing of ‘Twin Size Mattress’ that has the whole venue singing back, the band leave the stage only to return quickly for a three song encore that combines fan-favourites ‘Flashlight’ and ‘Twelve Feet Deep’ with ‘Oceans’ from their most recent record. And though these days it’s easy to dismiss an encore as part and parcel of the live show experience, tonight The Front Bottoms’ feels more than warranted, as does the huge reception they receive as they exit the stage for the final time. And as we’re leaving the venue, the varied audience shares one thing in common: massive smiles.