Home Blogs From the archives: John Robb live review of The Birthday Party at... 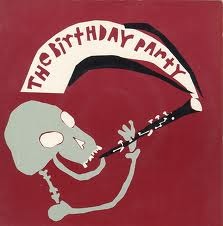 The Birthday Party are a band in meltdown and that’s a good thing for the viewer/voyeur.

Rock n roll only makes sense when it’s barely hanging together and when the malevolent black orchid of the band takes to the stage there is a genuine sense of cordite danger and limb flailing lunacy- a genuine and potent danger that fills the room far away from queuing at the bus stop beery bonhomie of the now trad punk scene.

The Birthday Party arrived on these shores last year full of fire and brimstone and a chemical fuelled angsty war on everything feel that instantly connected with the outsiders. The scorched earth policy of punk had done its thing and we were now demanding more and with their sawn-off shotgun blues and harrowing deep, dark, clunking neo-ballads the Birthday Party were somehow cramming romance and beauty into fire breathing, razor edged detonation rock songs that crawled like filthy insects.

Their Prayers On Fire album was a neat calling card of a band in transition from their Roxy Music on stereo-oids fuelled former incarnation of the Boys Next Door- a band that were dealing a comparatively svelte yet still dangerous lounge lizard smoking jacket take on the new wave albeit with plenty of electrical danger crackling at their loose stitched seams.

By the time they had morphed into the Birthday Party things had gone up a gear and the band were truly on fire. Frontman Nick Cave is a tousled haired maniac see sawing the zig zag blues through his skinny frame and the most destroyed individual to stalk the stage since Blixa Bargled started clanking the true metal with Einsturzende Neubauten as the only fellow traveller on this lunatic express.

Cave is poetry incarnate as he flails against the seething hatred of the spotlight. It’s compelling and thrilling as he spits out the zigzag shards of filthy lyrical madness, almost assaulting the crowd with his disdain and fierce blues before actually physically assaulting them with his pointy boots

The band themselves look like the coolest bunch of wacked out droogs on the planet- each one a character in a street gang from hell. Providing the spine cracking bass lines is Tracy Pew- a moustachioed freak who plays from the crotch and plays mean and heavy, guitarist Roland Howard darts around the stage like a man in a hurry whilst Mick Harvey stared a doleful hangman stare at anyone who dares to enter this zone of black hearted blues and Nick Cave is the twitching scarecrow who makes sense of the chaos.
Big Jesus Trash Can is the most dangerous song to be released since punk started its own war and A Dead Song is a beatific slice of filthy drama and a song full of hurt and pain that resonates in the city that birthed Joy Division.

The Birthday Party are a one band war and one of the best live bands I’ve ever seen and a band for all the fucked up poets of the world.