Home Books UK Book Reviews From Manchester with Love: The Life and Opinions of Tony Wilson –... 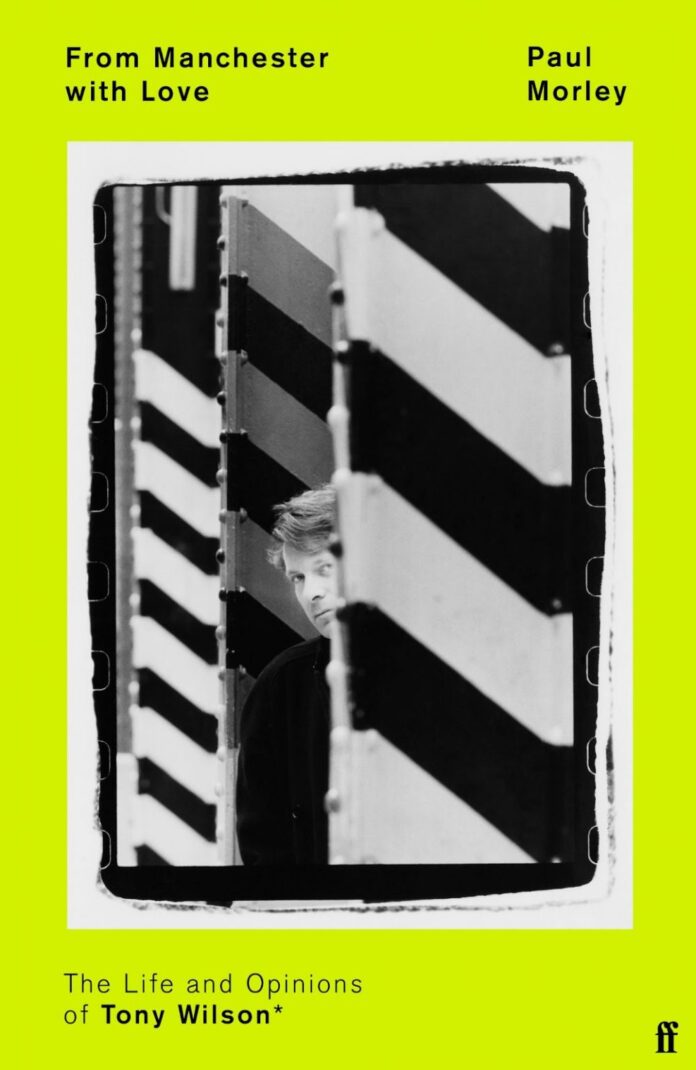 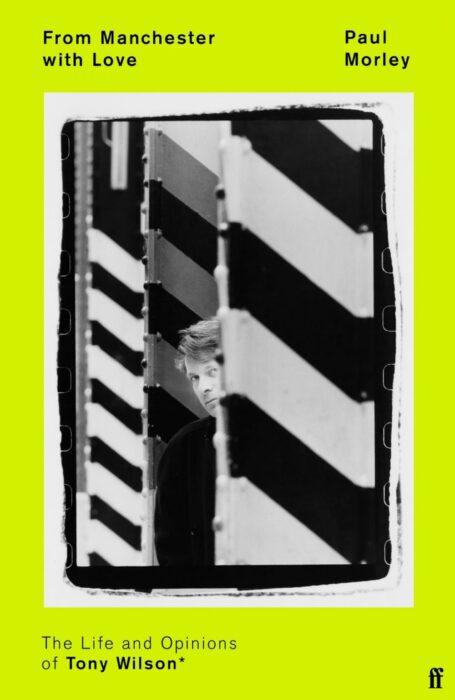 From Manchester with Love: The Life and Opinions of Tony Wilson

I don’t know whether to describe this book to you as a biography, or as a fantastical work of postmodern fiction that fills in the gaps between centuries of literature crafted by the likes of Laurence Sterne and Thomas Pynchon. Tony Wilson is living, Tony Wilson is dead. He’s a ghost, he’s a genius, he’s a raconteur continuing to wreak pleasurable havoc, he’s an intellectual, and he’s a saint — except when he’s not. Ultimately, Paul Morley creates a distinct “gentleman” who stands to rival characters like Don Quixote, Tristram Shandy, and Ivan Ilyich, seared into our collective literary consciousness. And there’s even a little bit of those ungentlemanly figures from modern literary history as well — from Jaroslav Hašek’s Švejk to Aleksandar Hemon’s Alphonse Kauders — lending a dark levity to the narrative.

In case it wasn’t yet clear to you, reader, this is no ordinary biography. If you’re anticipating a straightforward telling of Tony Wilson’s life, you’ll need to wait for another book. Coming in at almost 600 pages, it does report on some of the nodal points you might expect: his years at Cambridge, that much-mythologised Sex Pistols gig at the Lesser Free Trade Hall, the founding of Factory Records, and the opening and closing of the Haçienda. Yet those events are just a small part of a narrative in which Paul Morley champions Tony Wilson as a protagonist at the center of a distinctly modern fiction.

I have to imagine Laurence Sterne (if ghosts of dead authors read from their graves) is pleased with From Manchester with Love: The Life and Opinions of Tony Wilson. It’s at once a glorious and amusing homage to Sterne’s (in)famous novel The Life and Opinions of Tristram Shandy, Gentleman (1759). Yet it’s also a work unto itself, solidifying Tony Wilson as a postmodern hero in a reflexive novel that can’t help but refer to its own metafictions. Indeed, Morley references not just Sterne’s novel, but Michael Winterbottom’s cinematic adaptation of it in Tristram Shandy: A Cock and Bull Story where Wilson plays himself and Steve Coogan plays the protagonist (Coogan who, of course, played Wilson a few years prior in Winterbottom’s 24 Hour Party People).

The metafictional qualities of Wilson’s life become the center of From Manchester with Love as Morley explains, “Tony Wilson would say, wearing the mask of Laurence Sterne, ‘What a large volume of adventures may be grasped within this little span of life by him who interests himself in everything.’” For after all, “Tony Wilson, who could never be separated from his work, was always playing himself.” The myth, the legend, the real-life cock and bull story.

Just as Tristram hilariously recounts his own birth, Wilson’s “self-birth” was also heroic: “It was as though he had organised the move himself — it was all his doing, launching himself from inside the dark womb into the whirlwind of the great outdoors, already taking control, and then spending much of his life recreating the phantasmagorical canal trip he never got to make.” It’s not until Wilson loses his virginity at Cambridge, Morley writes, that he gets “his first actual experience with the elusive mysteries of the birth canal.”

Tony Wilson, the protagonist, develops multiple names and personas across the novel — and it really is a novel. Those many and varied heroes are at once doppelgängers and foils that include Anthony H. Wilson, AHW, Mr. Manchester, quite simply “Wilson,” and sometimes the intimate “Tony” with whom we’re on a first-name basis. Although unwritten, our protagonist is also St. Anthony, the subject of Mike Garry and Joe Duddell’s Ode. The book thus serves as biography, hagiography, and monument to a revered life. As one of Morley’s chosen epigraphs punctuates: “Exegi monumentum aere perennius. (I have made a monument more lasting than bronze.)”

Each of the characters has an ability to perform not just as Tony Wilson, but as the man himself who conjures theorists and thinkers by donning their “masks.” He speaks in the voices of figures across time and space, from Lenin and Nietzsche to bell hooks and Henri Lefebvre. As if reflexively alluding to his own acts of ventriloquism, Morley illumines how he, too, must wear the mask of Tony Wilson to write the book. Italicised quotes from our protagonist begin with “Tony Wilson would say . . .” Toward the end of From Manchester with Love, Morley literally becomes a medium, bringing forth Wilson’s own words: “Wilson wants to say something, which is his right. It’s his book. I’m ghostwriter for a ghost finding a way to get in touch . . . . He’s trying to tell me something, reminding me . . .”

A list of thirteen numbered paragraphs follows, written in the first-person present. Here, Morley’s own “I” collapses with the protagonist’s. Those points begin with the line, “I used to presume that everyone paid for their drinks in the early days of the Haçienda, because I paid for mine.” The words could be those of Morley or Wilson. Yet as the list continues, it’s clear that the narrator’s voice has indeed become Wilson’s, speaking through the author. “You couldn’t make it up, except we did,” he tells us.

Not unlike the character Tristram Shandy, who has the ability to narrate from the time before his own conception, Tony Wilson narrates after death. In fact, he dies a little more than halfway through the book. Morley writes, “Eight years after Rob dies, Tony Wilson dies, his heart giving out. So it goes.” Yet immediately, Wilson speaks through oral history footage as a talking head in the documentary-like film Morley has constructed in print form: “My final thought on how influential Factory was for Joy Division . . . . There would have been no equivalent myth if Joy Division and New Order had not been on Factory. There would have been the music, but the music was more because of the myth. Factory wouldn’t have been Factory without them. We were all in it together, till death did we part.”

Paul Morley plays with the idea that he’s a Vladimir Nabokov-style unreliable narrator, inventing the fictions of Tony Wilson as he goes along. Adoration for the protagonist imbues the moments at which our author becomes distinguished Mythmaker #1, while his complicated history with Wilson inflects some of his mischievous and puckish narrative constructions. It’s brilliant, and I can only guess that the hero of the story would be charmed by Morley’s clever interplay between truth and legend.

Speaking of unreliable narrators, there’s also a touch of Citizen Kane woven throughout the book. In moments where our narrator includes interview “footage” from figures in Tony Wilson’s life — from his children to his ex-wives to those with whom he created Factory Records and developed the Haçienda — Morley grows akin to the character of Jerry Thompson (played by William Alland) in the 1941 Orson Welles masterpiece, delving into the protagonist’s past through interviews with those who knew him best. Indeed, Morley begins in the present before flashing back to the picaresque narrative in which many people have an opinion of Tony Wilson, and they’re all probably a little bit spot on. The reader thus comes to realise that each of these narrators, not unlike Joseph Cotten’s Jedediah Leland or Dorothy Comingore’s Susan Alexander Kane, are unreliable in their own ways, offering fragmentary subjective memories that the reader is left to piece together. Naturally, these oral history narrations in Morley’s book cement Tony Wilson on imaginary celluloid in the reader’s mind, at once permanent and wholly impermanent all at the same time.

Blurring fact and fiction, Morley alludes to the subjective ways in which histories can be made and mythologised around the figure of Tony Wilson. (Anyone who has picked up a story of a Factory band or walked through the streets of Manchester knows about our protagonist as man, myth, and legend all wrapped up in one.) Throughout the text, minor incidents in the life of Tony Wilson become catalysts for Morley to construct larger histories of Manchester, the English literary canon, semiotic analysis, revolution, and so much more. In classic postmodern construction, Morley self-consciously points to the ways his book speaks to, yet reinvents, acknowledged biographical forms: “It is a common experience when reading the biography of a selected individual in a given time and place to see not only his individual development but a more general development in which, within the conventions of the form, other people and other events form around him and in this crucial sense are defined by him.”

To tell this story, Morley must take on Wilson’s vernacular and, in so doing, open himself to the grief, onerousness, frivolity, and sheer weight of taking on such a task. For it’s not just a book about Tony Wilson, but it’s also a book about the ways the protagonist shaped Morley himself, turning him into the very writer capable of creating this postmodern tour de force.

The fact that Morley builds Tony Wilson to be an Aristotelian tragic hero makes his actual death in the context of the biography come as a shock, a tethering to the painful human world with the realities of plans left unmade and wreckages left unresolved. Yet by the time the book reaches its physical end on page 583 — by which point Tony Wilson has already died twice in Morley’s narrative — the protagonist speaks out the last words. He utters an imperative, a command to the reader, but also a hint to his own historical trajectory into the future: “Onwards, darling. God bless.” Coming full circle then, I have to imagine Tony Wilson (if ghosts of dead impresarios read from their graves) is pleased with From Manchester with Love: The Life and Opinions of Tony Wilson.

You can buy From Manchester with Love: The Life and Opinions of Tony Wilson from Faber or from your favourite local bookshop.