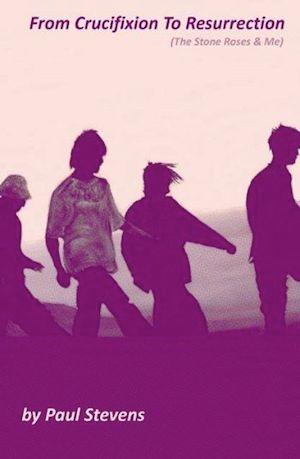 From Crucifixion to Resurrection
Paul Stevens

From Crucifixion to Resurrection – Louder Than War’s Nick Fisk reviews the book about the lives and times of The Stone Roses.

The remarkable thing about this book, written from the point of view of one of The Stone Roses’ biggest fans, is that it manages to document not when the band were most successful, or even, their least successful stage, but a long period of time when the band was not even together!

Nonetheless, this is an extremely well put together book, and a success in its own right.

It certainly was a strange time for Stone Roses fans, spent pining the loss of the band itself, while never giving up hope of a “resurrection”, even as the years ticked on, and despite persistent proclamations from band members stating it would not happen. I myself recall being asked by someone a couple of days after the split in 96 what I thought about it and saying simply, “We haven’t had the second comeback yet” so sure was I that this was not the end…it only took another 15 years of waiting!

In this time, we were treated to solo outputs by both Ian Brown and John Squire. Mani would join Primal Scream (though his musicianship was never tested with The Scream, I always felt), Reni was largely quiet aside from a brief stint with The Rub. The quality of all the solo work was a little mixed – from the stupendous “F.E.A.R.” to the dubious Seahorses project (though John Squire amply made up for this with his debut solo album) – and there was not the same magic without the band members being altogether.

But in this book, Paul Stevens, who quite unashamedly admits that, largely due to his age, he got into the Stone Roses late, we get to know the ins and outs of all of these projects. Paul met with members of both Ian and John’s bands, and the book documents just about all the recorded output of every single band member and each of their related side projects. A really good way of reading this book is to sit close to a computer and listen to tracks that are mentioned, many of which, more than likely, you will never have heard before. The career of Aziz – who people will know as being John Squire’s short-term replacement towards the end of the Stone Roses career pre-“Crucifixion” – is covered quite extensively, and one of his tracks (also used by Ian Brown), “Murassi” is worth looking up, as are several other tracks by related band members, such as tunes by ex-Seahorses, Chris Helme and Stuart Fletcher.

The full title of this book is “From Crucifixion to Resurrection (The Stone Roses & Me)” and the author works details of his own life into the book well, never over-doing it, and keeping it relevant. It’s apparent that he was a troubled character at times, particularly during a period while he was unemployed and involved in a messy relationship, but a new job and new girlfriend helped him pick himself up – the birth of his baby son at around the time that the band finally reformed was a double blessing for him.

For the most part, Stevens comes across as modest and unassuming, perhaps a little geeky at times – it would perhaps be difficult for someone who would buy all formats – CD, vinyl, cassette, etc. – of any Roses-related release as anything but geeky. His vast, not to say spectacularly well kept and up-to-date Stone Roses websites also clearly belie a certain nerdishness. I also found his reviews to be a little bland, soulless even, focusing on facts more than emotions. But he does not profess to be a skilled writer. There are also mistakes in the book aplenty which could have been ironed out by a more thorough proof-read (as the author seems to be someone with an almost OCD-like perfectionist streak when it comes to details, I expect he is a little disappointed with the number of mistakes in the first edition). As a documenter however, you really cannot fault him – there can be little in terms of detail that has been missed out for anyone who has a curiosity for Roses-related stuff from around 1996-2011!
There is also an honesty about the writing of this book. Despite clearly being one of the band’s biggest fans, even he will concede that not every song released by a Rose in the covered timeframe could compete for greatest song of all time – “Home Is Where The Heart Is” from Ian Brown’s “Solarized” is described as “a bit of a nothing track, both lyrically and musically” for example! Stevens’ honesty did almost amuse me at times, I have to say.

On the flip side, there is apparently the need to express a kind of devotion to the band. Being a fan who discovered them only after the release of “Second Coming”, he is of the opinion that this is their best album, in fact, the book seems to rest on this premise. Personally, I would say that this is like saying that you will prefer a poor film sequel to the original simply if this was the one you saw first, which doesn’t quite ring true logically, and I personally would side with Citrus Sunshine, in the “Fan’s Views” at the back of this book, where he gives a good account of why it was an unsatisfactory follow-up in many ways. Stevens also refers to Brown’s “fantastic vocals” at Heaton Park, asking “where are Ian’s critics going to hide now?” Well, I’m sorry Paul, we’re still here, and we’re not hiding! Ian – grow up and get some singing lessons, ffs! Morrissey did it, why can’t you?!

Overall, I really enjoyed this book. It is one of the most professional-looking self-published books you will see. There may be several pieces taken from the author’s websites, but I think the whole package works very well here in book format. There are several appendixes, featuring an excellent section of fans’ interviews and viewpoints (some quite touching), a Stone Roses family tree, a gigography, an extensive discography (though for the complete version, see one of Paul’s websites), and a great section of Paul’s favourite Stone Roses and Roses-related collectables. I like the fact that he’s listed the “Fool’s Gold” Gold Vinyl edition, not for its rarity value, but for its cool appeal. I have 2 of the items listed in his “related collectables”, but the no.1, an Ian Brown Pewter Monkey, released to tie in with the release of his debut album sounds uber-cool.

Fans such as Stevens always seem to expect little reward. The fact that he won the first pair of tickets to be made available for Heaton Park via a radio phone-in competition seems only fitting for someone who has followed the group with such fervour. This book has clearly been painstakingly put together, and as I say, is an enjoyable read, despite being about, in some ways, a fairly bleak and barren time for Roses fans. It’s a book, of course, that Roses fans will enjoy – there is a different take to the typical biography – and is worth a read as an interesting insight into the life of the “superfan”.