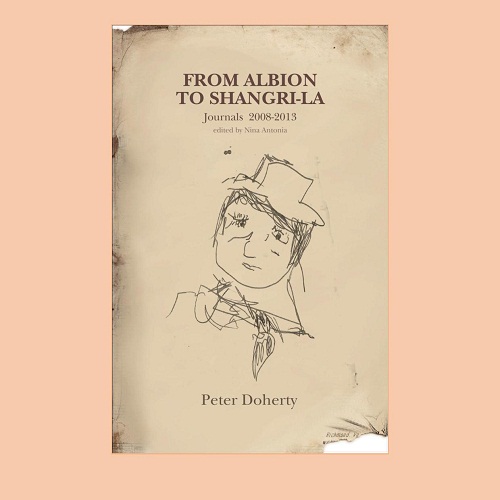 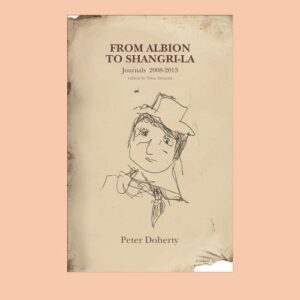 From Albion To Shangri-La By Peter Doherty

Out now on Kindle

The Babyshambles’ frontman and sometime Libertine releases his second volume of journals, this time with the editorial support of legendary rock’n’roll writer Nina Antonia. Gus Ironside reviews the book for Louder Than War.

“Might take up another hobby. Sex and ? and Rock and Roll. Fill in the missing word.”

Peter Doherty provokes extreme reactions; to his large and loyal fan-base, he’s a Dionysion adventurer infused with a romance and decadent glamour that inspires unbound adulation. To his critics – who are legion – he’s an unholy conflation of Typhoid Mary and Sid Vicious, a talentless, spiked and skewered folk devil.

The twin poles of judgemental ignorance and starry eyed fandom equally fail to reflect the tangled reality of Doherty’s life and works.

From Albion to Shangri-La is a collection of writings from Doherty’s journals circa 2008-2013, abetted by tour diaries and a previously unpublished interview with the book’s editor, the quintessential underground rock ‘n’ roll writer, Nina Antonia. Antonia is the perfect choice of curator for these writings; a compelling chronicler of charismatic Lost Boys, from Johnny Thunders to Peter Perrett, she also has 10 years of steely life experience working in the field of substance misuse.

Johnny Thunders – In Cold Blood, Nina’s celebrated biography of the elemental Italian American outlaw musician, has famously never been out of print since it was first published 27 years ago. Since then, Antonia’s writing has been honed and sharpened, losing the occasionally baroque curlicues of her early prose but retaining its passion and energy. 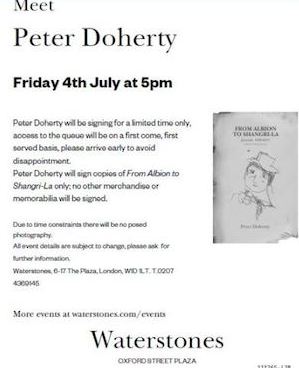 Consequently, her foreword to the book is clear eyed and unflinching, yet driven by a full blooded humanity that refuses to acquiesce to either sycophancy or authoritarian judgement. The editing and annotation extends this intelligent and supportive overview throughout From Albion to Shangri-La’s lengthy and handsomely presented 256 pages.

The journals contain musings and vignettes that will be compelling reading for Doherty devotees; the fall out from the end of Peter’s relationship with Kate Moss provides moments of rueful humour, while his never ending court appearances toll a repetitious refrain. As expected, drugs and attempted rehabilitation are evident; Doherty’s dilemma is excruciatingly obvious and familiar, yet the reader is painfully powerless to intervene. Even before we reach the tour diaries section of the book, there is the sense of the time honoured ennui and disorientation of touring, viewed through the filter of an opiated twilight world.

The ever changing circus that surrounds this passing show is part of the intrigue, particularly as many bit-players leave notes in Doherty’s journals that are included here. The malignant issue of addiction is neither ignored by Doherty nor excised by Antonia; rather, it forms the continuous, grim shadow that haunts these pages.

Doherty’s writing is at its most arresting in the Burroughsian Naked Lunch moments when he sees clearly what’s “on the end of the fork”. These moments of perception and insight are delivered without the romantic whimsy which often characterises Doherty’s writing, hinting at another, more perspicacious voice for the narrator, less in thrall to the Romantic poets, more in the vein of Bukowski or early Burroughs, circa Queer and Junkie.

There is a strong rhythmic pulse through the writings and a pervasive undercurrent of drifting restlessness. A Jungian chthonic spirit manifests in the intertwined forces of creativity and destruction which propel Doherty through the stormy seas of this period. His observations from the fraught peripheries of his senses are particularly well delineated:

“in this startled state, within the hollow silence of the ever so early morning, every noise is so significant, a series of innocent sounds will now become an intricate conspiracy…”.

Could there be the possibility of renewal and re-invention for Peter? In many people’s eyes, Doherty has long ago been written-off as a case too hopeless even for Saint Jude to aid; yet the sparky pop classicism of Babyshambles‘ 2013 release, Sequel To The Prequel, demonstrated surprising reserves of grit and creativity from this former army brat and his songwriting partners Drew McConnell and Mik Whitnall, raising the possibility that this book documents a transitionary chapter now closed.

From Albion to Shangri-La is aimed squarely at Doherty’s fan base, for whom this assiduously assembled and edited volume will be an essential purchase, and deservedly so. For all its readers, both casual and fanatic, this book implicitly poses the question “Why should we care?”. The compulsion to create art in whatever form is frequently linked to inner turmoil and unresolved needs, so it’s scarcely surprising that so many of our favourite musicians, artists and writers exhibit personality flaws and troubled personal lives.

As always, it’s up to each one of us how we choose to react and respond. Doherty has his own challenges to face; this is ours.

Peter Doherty will be signing copies of From Albion to Shangri-La at Waterstones Oxford Street Plaza at 5pm on Friday 4th July on a first come, first served basis.

From Albion to Shangri-La is published by Thin Man Press and is now available on Kindle here and in paperback from July 1st here.