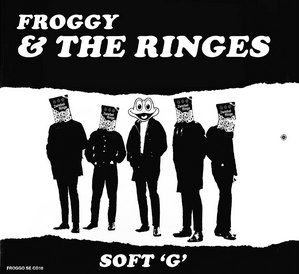 What a name! At first I thought this was a play on that Annoying AF Crazy Frog ringtone with affected spelling. I mean, what the frog is a Ringe? According to one dictionary a ringe is: n. a whisk made of heather. Taking a closer look at the cover photo, I see Froggy’s friends have what looks like a crisp packet over their head, reading Zwiebel Ringe. Thanks to the internet I find this is German for Onion Rings. It’s like David Lynch recreated Alberto Frog and his Amazing Animal Band from classic 70s kids TV show Bod.

Here we have 4 tracks of garage punk. It’s not like that polished American or Swedish stuff you get these days. This is lo-fi.  This is driving, snotty, warts and all Estuary English garage punk, a style conquered in the past by Armitage Shanks. This has all the dirt and aggro that the Shanks used to dish up. You feel like you’re being trampled over by a horde of pissed up bastards at closing time in a pre-Covd 19 pub – all of them shouting right in your ear’ole. With that air of menace, you get the feeling these amphibians must have crawled out of the same marshes that harboured Magwitch. Manic relentless strumming attack on the guitars. A drummer whose focus is on hitting them harder rather than faster. And just to fill those gaps on the frequency range Froggy and The Ringes have added in keyboards.

Froggy and The Ringes (Soft G) appears to tell the story of finding snacks in a German service station, complete with “ribbit ribbit” at the start and an “Eine, Swei, Drei, Vier” worthy of Dee Dee. Singing “Where did you get your trousers from?” on Auction This is a joyful snatch of nonsense. Don’t Listen slows the pace a little and brings the tradition of ATV’s How Much Longer? into the overall garage vibe. (We Are) Cheap Beer makes more use of the keyboard to give something of a new wave feel to a rowdy shoutathon.

In keeping with the aesthetic this record is “available in low fidelity only” – nice touch. I really hope they recorded it in one take, in an analogue studio, with all the meters up in the red. I particularly liked the sleeve notes written in the style of a 60s or 70s release, harking back to the origins of garage (Oh yeah, love the Sonics, man). “The group has an unusual vocalization plus a space-age, plus-beat sound…all of this makes FROGGY & THE RINGES! The next time you hear a riotous rock ‘n’ roll ‘ribbit!’ from the bulrushes it may just be FROGGY & THE RINGES!”

Who are the mysterious amphibian and baked corn snacks? I thought there was a distinct similarity between Froggy’s croak and the voice of James of Kibou Records/The Domestics. I doorstepped him in true tabloid fashion, ever eager to seek the truth for Louder Than War readers. “You’re not the first to say that”, he responded. “I think Froggy is quite a Domestics fan so I guess I should be flattered”. Nothing conclusive, but highly sus. As for the Ringes? Apparently they are Ranchard Ringe on the bass, Sir Ringe-o-Lot on keyboards, Ringe-o-Starr on drums and Claudio Winkelf-Ringe on lead guitar. Whoever is behind the masks, they are pond life for sure.

300 seems to be the volume of choice for most DIY punk 7″s these days. For once they are all in one colour – black, like a Model T. But in the absence of limited colour vinyl, the first 100 come with a special F&TR plectrum and “Frog Art Slide” – whatever that is.