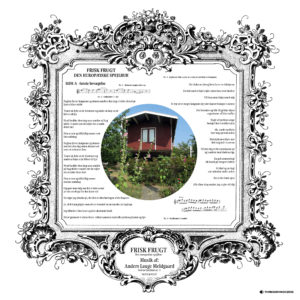 Den Europæiske Spejlbue is the latest album by Danish multi-instrumentalist Anders Lauge Meldgaard otherwise known as Frisk Frugt. It was delivered after an extensive gestation period where improvisations and even new instruments were created and coalesced to create an album that is inspired, joyful, manic, and incredibly playful.

Inspired in parts by Danish folk, old folkloric texts found in the Royal Library in Copenhagen and a long bike ride in Southern Germany, Den Europæiske Spejlbue plays out like a fairy tale in high definition, grandiose in scope and vision yet strangely intimate and inclusive. You are instantly sent spiralling down the rabbit hole within the first seconds of the album starting as wind, percussion, piano, and whatever else (throughout its running time it is impossible to tell what instruments are playing and which are classic or newly invented). Your head is put in a spin as you try to grab hold of an anchor but there is none forthcoming. Far from making you feel unsettled or nervy, you get the impression of being  shrouded in warmth and glorious technicolor never once wanting to leave the child-like world that Frisk Frugt has created.

Den Europæiske Spejlbue sounds like the Bonzo’s, Barrett, Wilson, and Animal Collective all drinking the freaky punch but, as with all good improvisational musicians, there is a core sense of discipline and structure that stops the album descending into a chaotic mess.

One of the most effective instruments on the record is the human voice, choral harmonies burst in and fade out adding textural flourishes and a yearning, heartfelt quality whilst Anders’s own voice is unique in its storytelling way. He (Anders) sometimes sounds brittle and meek then within a few bars he can become strong and assertive, making him a narrator that is to be trusted.

Others have noted how Den Europæiske Spejlbue is summery in feel and this is a fair point, but with us in the grip of winter, I heard this as a representation of Spring with all its possibilities, people starting to return from their winter induced lethargy.

This is an exceptional album that kept me smiling throughout. Throw out your heaters and your gloves, put this on loud and feel the warmth flow through you.