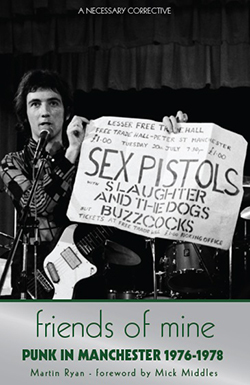 Martin Ryan has produced the definitive account of Manchester’s seminal punk scene – kicked into gear when a pre-Buzzcocks Pete Shelley invited The Sex Pistols to play in the city. Nigel Carr reviews the book for Louder Than War.

With many new punk bands popping up around the country, year zero was 1976. Event zero was The Sex Pistols playing at The Lesser Free Trade Hall in Manchester in June of that year. Many claimed to have been there, few actually attended. Ryan’s book takes a timeline from that seminal gig to the end of October 1978 when a young Chris Sievey and The Freshies would play the Electric Circus before the venue closed and after a short reprieve, it all was over. The Circus was flattened and an era had ended. Manchester had become the northern steam house for an exploding subculture that would affect no other city in the same way.

The book is sub-titled, A Necessary Corrective and for good reason. There has been so much bullshit written about the rise of punk in Manchester, few people actually know the truth. The truth is that in 1976 and early ‘77 punk was not the all-pervading scene it has become today. In those early days, there were so few punk singles available, DJ’s had to intersperse records like New Rose and Anarchy in The UK with tracks by Bowie, Roxy Music and Dr Feelgood to make up the numbers. Most punk audiences would turn up in flared jeans as the fashions simply hadn’t kicked in. You were more likely to see The Enid or AC/DC at The Electric Circus than any touring punk band, many of whom found it difficult to get gigs.

Ryan and cohort Mick Middles (who later went on to write for Sounds and many other publications as well as writing a variety of high-quality books) set up the fanzine Ghast Up in early 1977. They scored interviews with Buzzcocks and other up and coming punk bands and covered gigs in the city, giving their own unique spin on the scene. The magazine was produced on an old-fashioned Roneo Stencil machine and distributed to record stores like Virgin on Lever Street and Paul Morley’s shop in Stockport. Augmented with photos by the likes of Kevin Cummins the publication would run for only 3 editions before running out of steam in July ’77 due to the sheer labour involved producing it.

Ryan takes us on a journey through every gig he attended throughout this whole period. There are detailed diary-style reports of each performance, not just at the Circus but at venues right across Manchester including The Phoenix, The Ranch and The Free Trade Hall – there is also the odd jaunt to London, including the legendary Hope and Anchor!

The book is packed with detail, a full glossary and gigography as well as all three Ghast Ups with interviews with the aforementioned Buzzcocks’ Pete Shelley and The Vibrators.

“Manchester was the second city of punk but quickly moved to create its own narrative – driven by the late and great Pete Shelley who modestly shared his new found fame with a whole host of characters from the local scene – it pretty well invented post-punk with Joy Division. This book captures the energy and the madness as a post-industrial city built the foundations with music for the future city we have today.” – John Robb

This book is an essential part of any music fan’s collection. It fills gaps that few knew were there and far from being just a corrective, is a fascinating glimpse into a nascent subculture. One that would change Manchester forever and set the scene for an explosion of sub-genres which are still popping up to this day!

Words by Nigel Carr. More writing by Nigel on Louder Than War can be found in his Author’s archive. You can find Nigel on Twitter and Facebook and his own Website. Top pic © Kevin Cummins.