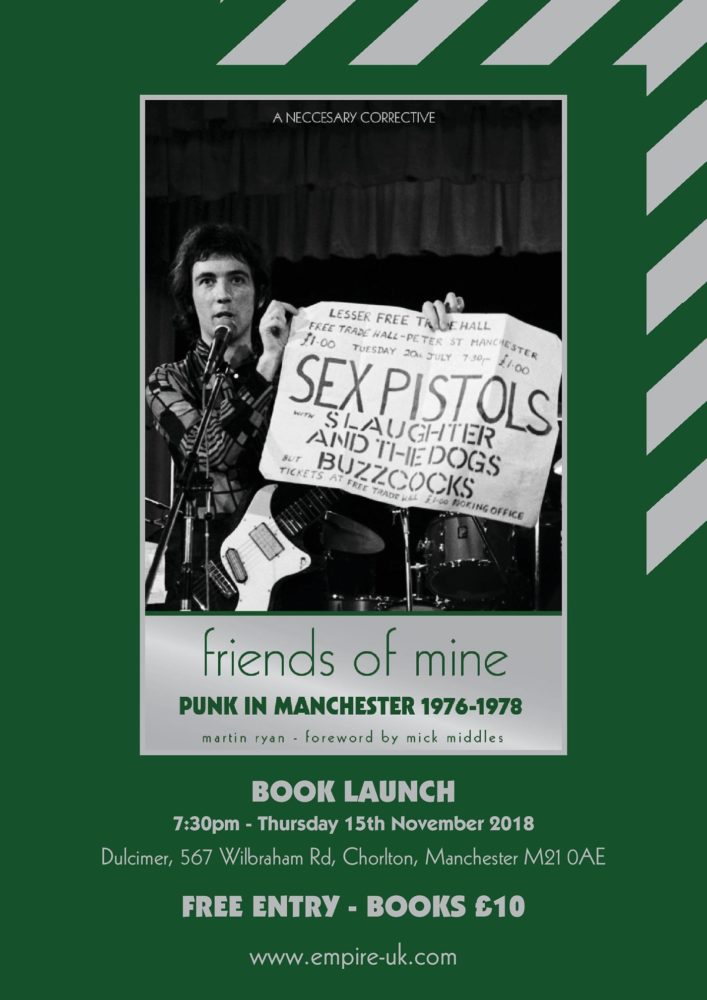 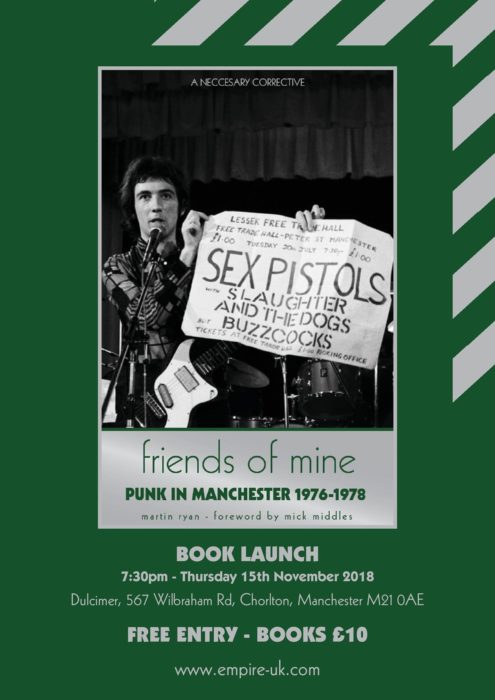 Tomorrow evening sees the long-awaited launch of Martin Ryan’s book on punk – Friends Of Mine – Punk In Manchester 1976-78.

Described by Mick Middles as a ‘much needed corrective’ Ryan’s book rights some of the many wrongs that have been written about the early punk scene in Manchester. The launch includes a panel discussion about the book and Manchester punk in general. Chaired by Middles (writer) and including Deb Zee (punk legend), Steve Cundall (The Drones), Stephen Doyle (Salford City Radio DJ) and Brian Grantham (Slaughter and the Dogs/Drones). It’s followed by a punk DJ set by Stephen Doyle.

“When forced to choose between truth and legend – print the legend”

“A much needed corrective”

Many myths surround the explosion of punk in Manchester and its repercussions. The central fable being of how a city was re-born by the seminal act of one gig and one band attended by many of the people who would go on to play a major part in the transformation of the city from post-industrial wasteland into multi-cultural hub.

Martin Ryan caught the punk bug in 1976 just like everybody else, it’s just that his memory is not clouded by apocrypha. He was there, or not there, and can recall dates, times, gigs and the growth of the nascent Manchester scene. He and Mick Middles even put a lot of it down in print in Ghast Up, one of a rash of fanzines to emerge in punk’s wake.

Concentrating on the years 1976, 1977 and 1978 ‘Friends of Mine’ is a blow by blow account of how punk really happened in Manchester. A much needed corrective.

MARTIN RYAN was born in 1955 in Stockport where he still lives with his wife Kate. They have 3 grown up children. In 1976 as a 20 year old rock music fan he regularly
checked out local bands on the Manchester pub rock circuit.

1977 would prove a defining year as he began the short-lived Manchester punk fanzine Ghast Up alongside fellow punk convert Mick Middles – thus beginning an involvement with the fabled Manchester scene that revolved around several bands and local luminaries such as Paul Morley and Kevin Cummins who frequented the mythical Sunday nights at the Electric Circus.

Martin has written for the NME as well as contributing to several Mancunian publications, including the legendary City Fun fanzine that ran from 1978 through to the mid-eighties. He has been called on to provide his knowledge of the Manchester music scene to authors, film researchers and university students.

This article –  by Nigel Carr. More writing by Nigel on Louder Than War can be found in his Author’s archive. You can find Nigel on Twitter and Facebook and his own Website.