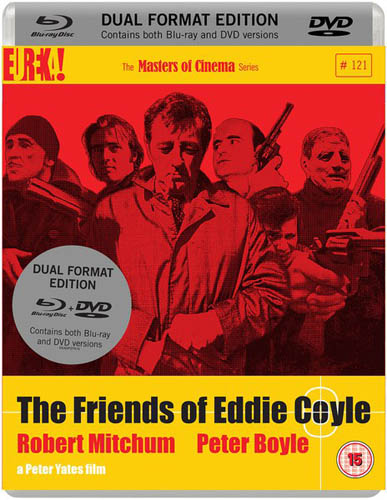 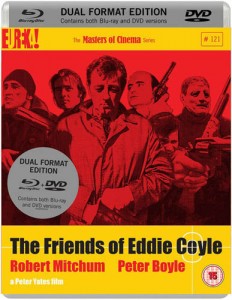 Jamie Havlin reviews a film from 1973 that acts as an interesting companion piece to the recent Boston set box office hit Black Mass.

With a screenplay by Paul Monash based on the novel of the same name by bestselling author George V. Higgins, The Friends of Eddie Coyle is directed by Peter Yates and stars Robert Mitchum as Eddie Coyle, a strictly low level gunrunner for various Boston gangsters and robbers.

Known in the Boston underworld as Eddie Fingers due to a punishment meted out by some Massachusetts mobsters that ended with all the knuckles on one of his hands being broken when he made a mistake with some guns that meant they were somehow traceable.

‘If you were to ask me,’ Eddie observes at one point to one of his ‘friends’ Dillon in the bar where the latter works, ‘I’d have to tell you I’m not having a very good day.’

From early on in this film you get the idea that Eddie has plenty of days like this. He’s world-weary, cynical and more than a little scared of being sent down for several years after being caught driving a hijacked truck full of booze in New Hampshire. Sentencing awaits.

Not surprisingly, he has few dreams left, maybe only the vague notion of being given a new life ‘out West’ by the Feds after turning informant. He gives a very useful tip-off to ATF agent, Dave Foley (Richard Jordan) but Foley squeezes him for more information before he can cut any kind of deal over his charge.

Of course, this might not prove as easy as it might initially strike Eddie. In fact, it would be impossible in this world for men far smarter than Eddie (and he isn’t stupid) to foresee the problems that might just attach themselves to whichever decision he eventually makes. 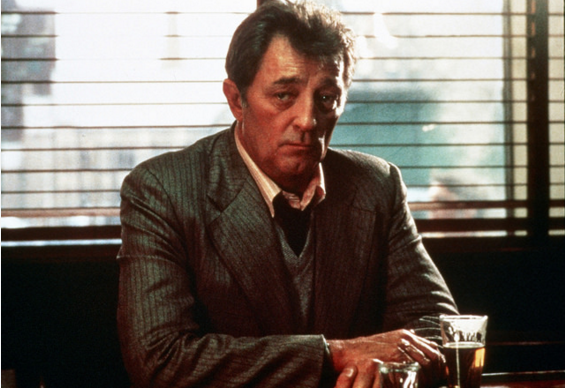 Less slick and commercial than Bullitt, the movie that Yates will always be best remembered for – bizarrely enough, his first feature was Summer Holiday – I doubt a single person watching this film has ever accused it of glamorizing crime or violence.

Although it opened to generally very good reviews, in an era of the kinetic thrills of The French Connection and the dazzling ambition and brilliance of The Godfather, Yates’ downbeat and depressing film was largely ignored in cinemas.

This is a pity as it is a remarkably realistic and intelligent piece with some fantastic performances. Such is the onscreen charisma of Mitchum that initially it is hard to accept him as somebody operating in such a lowly position in the criminal hierarchy, a loser struggling to survive with his wife and young family in cramped conditions, who realizes that once he is back inside they will likely have to go on welfare. ‘I’m getting old, you hear?’ he tells another ‘friend’. ‘I spend most of my life hanging around in crummy joints with a bunch of punks drinking the beer and eating the hash and the hotdogs and watching other people going off to Florida while I’m sweating to pay the plumber.’

With his shabby Mac and resigned expression, though, you do quickly buy into him as Eddie and this role has to be a highlight of Mitchum’s career.

Also impressive is Steven Keats as Jackie Brown, a brash younger arms dealer with big ideas who will likely become Eddie in twenty five years time while Peter Boyle is one of those always reliable actors who really should have scored bigger parts in Hollywood.

Gritty and gripping, The Friends of Eddie Coyle deserves to be much more widely recognised and if you’re interested in the New Hollywood era of the late ’60s and early ’70s then you really should make the effort to see this.

Likewise, if you enjoyed recent hit Black Mass, another Boston set crime movie, then this could certainly be of interest to you. In fact, its been said that while filming Mitchum wanted to meet some local villains including James ‘Whitey’ Bulger, who Johnny Depp plays in Black Mass.

Extras include a 1996 career-spanning on-stage interview with Peter Yates hosted by critic Derek Malcolm and a 44 page booklet.

For more on the movie visit the Masters of Cinema webpage.