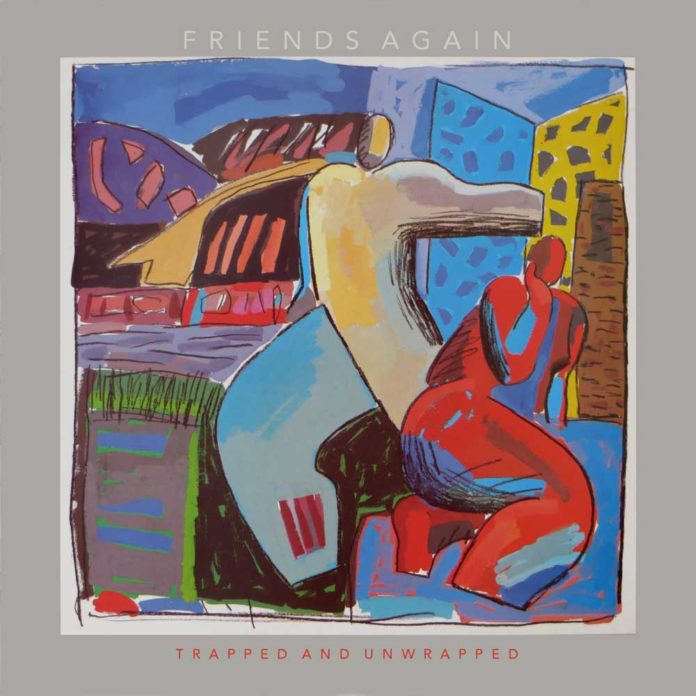 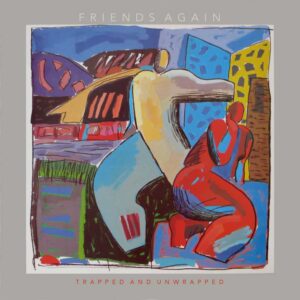 Expanded 2 disc reissue of the Glasgow pop band’s sole album, with a whole raft of bonus material, all remastered by founding member and keyboardist Paul McGeechan…….Ian Canty detects some honey at the core, obtained by a resistance to 1980s production fads…..

At the time when Friends Again were making their early moves, Glasgow was a city undergoing something of a boom musically. Postcard Records and Orange Juice had recently engendered a media flurry, with a handful of lovingly crafted and highly collectable singles. These platters sent the weekly music press’ hip young journalists scampering northwards, eagerly searching for the next big thing to emerge from the city which could put them ahead of the crowd.

Friends Again officially came into being just as this huge wave of enthusiasm from the press was beginning to taper out. As such, it left them in a bit in no-man’s land timewise. Just after Orange Juice had graduated to the big charts, but well before C86 would make their kind of jangly, slightly edgy pop music de rigueur once again. Founder Chris Thomson and Paul McGeechan formed punk band the Craniums at the tail end of the 1970s, with bass player Neil Cunningham joining as the band ran through a number of names and a change of style to something more punk funky as they began to learn their instruments.

Stuart Kerr occupied the drum stool by the time the band renamed themselves finally as Friends Again. Another slight reshuffle came as guitarist Andrew McGurk left after a post-gig argument and the incoming James Grant brought the band up to their “classic” line up. Their first release was the Honey At The Core single, one of their best loved efforts and originally issued on their own independent Moonboot record label. Things moved quickly and the band were soon signed up by Phonogram.

After a couple of near misses with singles State Of Art and Sunkissed, Friends Again were despatched to the studio with the Beat’s producer Bob Sargeant to cut what would turn out to be their only album Trapped And Unwrapped, which makes up the most part of disc one here. Emerging at the middle of the 1980s meant there are a few annoying and dated production tricks (those thin, echoing horns for example), but probably less than you would expect, probably due to Sargeant’s steady hand and grounded approach (though Television’s Tom Verlaine was called in to produce Swallows In The Rain).

Proceedings start with a kick on the lively riffing of Lucky Star and smart second single Sunkissed follows, adding a little soul into things. The band employ inventive lyrical imagery here and almost throughout Trapped And Unwrapped (there is the odd dodgy phrase – but that was the 80s eh?). Lullaby No.2 isn’t far from Orange Juice circa Rip It Up which is good and State Of Art manages to combine the band’s energy with strings well, a nice slice of 80s pop music. Tomboy is loveable, old-fashioned expansive pop in the Bowie mode, but the LP does sag a little in the middle, prior to really perking up towards its close.

A strong ending in fact with two belting numbers in Honey At The Core (Reprise) and Moon Three. Keyboards are employed on the former, a recut of their debut waxing which expands and really allows it to stretch out and breathe, there’s some lovely guitar on it too. On Moon Three the vocal style employed by Friends Again seems to owe a bit to David Bowie again, acoustic strumming and a spacey atmosphere ends the album on a futuristic, strange and slightly sad note. The bonus tracks on this disc are remixed versions of album songs, nice to have for the completists among us I would imagine.

The second disc rounds up different mixes and rare tracks. I found a lot to enjoy on this portion of the set, there’s a few hidden gems here that would have graced the album proper. The less guarded moments tend to show Friends Again as a looser, more fun proposition. A good example of this is the adorable Dealing In Silver, the flipside of State Of Art. The sparseness of the music works wonderfully, harmonica, backing vocals, main voice and acoustic guitar, simple but lovely.

Winked At is as fast and exciting as anything the band ever set down and Wand You Wave is great jangle pop and another that displays a Bowie influence. Of the different mixes on this disc, an excellent and classy 12-inch cut of State Of Art probably is the pick. This section of the set ends with three demo tracks, the best of which for me is set closer Caller, which has some fine soul organ and an appealing groove.

Friends Again came to an abrupt halt just before the album was released, with most of the band going on to form the more successful straight pop/rock act Love And Money. Which of course left an album without a band to promote it, with ousted band leader Chris Thomson going his own way with his frequently diverting outfit the Bathers. This new reissue though shows that the band might have been onto something if they hung in there a little longer, there’s a lot of well written pop songs on Trapped And Unwrapped. Whilst it is true to say with Bob Sergeant they struck lucky in getting a producer not obsessed with fads as many were in the mid-80s, you had to have the raw materials to work with in the first place. Friends Again had tunes, smart lyrics and a spunky energy which runs right through this new collection and makes for a rewarding listen.