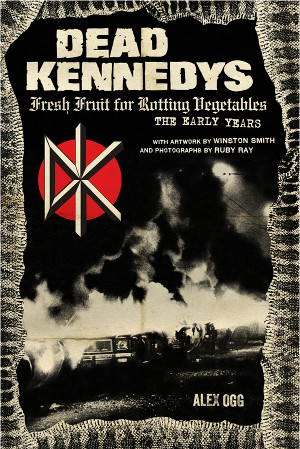 A long overdue book focusing on the early years of one of punk rock’s most notorious and greatest loved bands, The Dead Kennedys.

In his prequel, author Alex Ogg reminds us that The Dead Kennedys have never been written about at length (see John Robb’s tribute here). The Ramones, Clash and Pistols have over 100 titles between them, and yet DK are arguably one of the bands that typifies punk at its best. They stuck two fingers up to the music industry and then lunged in to attack it. And who doesn’t recognise that logo?

If you don’t know the Dead Kennedys then:

For those already inducted, read on…

“Fresh Fruit For Rotting Vegetables, The Early Years” does what it says on the tin. It starts by placing the key players and the band that would become Dead Kennedys in the context of the development of punk at a local San Francisco level and globally. It then charts their rapid progress in spite of, or possibly because of, a “cultural hand grenade of a name” from garage practices and their early performances, DIY released first 7 inch and onto their debut LP – all of which happened from their own reckoning by “pure dumb luck” – perhaps playing down the hard work and ingenuity which was partly responsible. As Louis Pasteur said “Fortune favours the prepared mind”.

Chapter titles are taken from DK songs, which is always a winner in my view, causing a wry grin. The pages are littered with band collages, Winston Smith’s art, gig flyers and Ruby Ray’s photos capturing the band in their infancy – which keeps the reader’s attention and makes this all the more difficult to put down. Photos of different covers and record middles from across the globe demonstrate how far their message spread across a world eager for acerbic high octane punk rock.  There are also excerpts from the “Hard Rock” comic about DK punctuating the story of pivotal events in the band’s early stages – in itself a humorous contradiction. I’ll be returning to this volume for a cursory browse at the pictures every now and then.

Alex Ogg manages to overcome the difficult job of providing a narrative that includes conflicting versions of events from former band mates who are at loggerheads, allowing the details and trivia to froth around so the reader can decide their own version of “the truth” from whatever bubbles to the surface.  He brings the story alive using interviews not only with band members, but with other contemporary witnesses including gig-goers. The writing manages to go some way to capturing the excitement, buzz, artistic freedom, true rebellion of punk rock in the early days when it really was a shock to the establishment rather than a music genre co-opted into corporate rock.  I came away from reading this book marveling once again at the musicianship, lyrical satire and sarcasm, theatrics, imaginative pranks and art that made Dead Kennedys stand out all those years ago – and still stand out now. Which led to me having a DK-athon over the last week!

Fresh Fruit For Rotting Vegetables, The Early Years is packed full of interesting facts and gossip:  I found out what that line about Serpents Eggs in California Uber Alles was really about rather than having a general gist it was “something bad”; the pizza delivery job Jello had back in Boulder being the inspiration for songs like Terminal Preppie and Holiday in Cambodia, and the true identity of Norm, the producer credited for Fresh Fruit for Rotting Vegetables.  Want to know about production processes and techniques they employed to capture and embellish upon their live sound to create  great records (and the obligatory conflict in the studio within the band and between the band and engineer)?  That’s in here as well.  Want to know who really wrote a particular song?  You’ll have to make your own mind up as each stakes their claim.

A chapter based largely on a stowaway-cum-roadie’s reminiscences provides an insight into the first UK tour Dead Kennedys undertook, bringing such cultural imports as stage diving and an amusing anecdote where the band misread the crowd’s sense of humour, thinking they had themselves misread the irony in the band’s lyrics.

The end notes detailing sources and full quotes provide a deeper level of trivia that some nerds…errmm, I mean “fact fans”, will absolutely love.  In the days before the internet this volume would have been a punk pub quiz host’s bible!   I have to admit I skipped much of the “Yakety Yak” chapter, comprised as it is of quotes about DK from some predictable punk/HC luminaries, a few journalists and the less predictable Pete Townshend (Who?), Elijah Wood and Massive Attack. Probably even something in there to impress Bruce “Punks can’t play their instruments” Dickinson.

Russ “Dr. Punk” Bestley, responsible for the image laden design of this book, submits a 3-page profile/homage to Winston Smith, whose artwork helped amplify the sound and lyrics of DK to create notoriety on a scale the Pistols could only have dreamt of.  Dada, situationism, Jamie Reid and Gee Vaucher all get a mention, of course.

The tale closes,as the title would suggest, after Fresh Fruit was released and drummer Ted left in December 1980.  Alex Ogg has left unpicking the rest of the DK story for “some other poor bastard” but I think he has proven he is the man for the job (go on, you know you want to, Alex!).  Whereas some band/artist biographies get bogged down in so much technical detail that you forget the generality of what you have read and lose track of what went on (I am thinking in particular of People Funny Boy by David Katz) our author has mastered the art of distillation which is just what you need to plot a path through a contentious story such as that of the Dead Kennedys.  Finishing the book, I was left reflecting that the Moral Majority and PMRC couldn’t destroy the band but they have done a pretty good job on each other since via the court system.  That’s another story in itself.

~
Get your copy from turnaround-uk.com, activedistribution.org and pmpress.org
Lavish praise from Nathan Brown. You can read more from Nathan onLouder Than War at his author’s archive here.