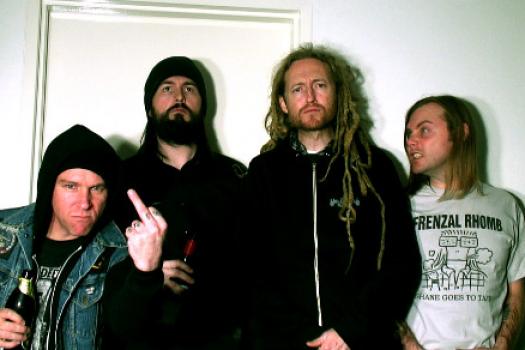 Dave Beech gets his second dose of Aussie Punk in as many days (the first being Smith Street Band) as he catches Sydney’s Frenzal Rhomb on their first UK tour in eleven years.

My second serving of Australian punk in two days comes in the form of old hats Frenzal Rhomb (the previous evening spent sweating in the presence of the excellent Smith Street Band), as they took to a tiny stage at Manchester’s Sound Control. Arguably the worst venue in a city full of both fantastic and questionable performance spaces, it’s split between three rooms, boasting very little in the way of redeeming features between any of them. Apart from the bands to which they play host. Making the journey to our shores for the first time in almost eleven years, Frenzal Rhomb (“fatter and more haggard now”) draw a crowd larger than anticipated, and as we arrive with a belly full of overpriced craft beer, we’re forced to stand at the back with a surprisingly clear view, sans support beams and eager crowd-surfers.

Opening with the typical Aussie-humoured Russel Crowe’s Band, the tone, and speed, of the evening is firmly set. With a “strict” 10pm curfew (what?) the band are limited to a 45 minute set, and though their songs rarely clock over the two minute mark, it does seem a little harsh, given the distance the band have travelled. Fortunately the band take it in their stride, hammering through tracks such as All Your Friends Think You’re A Fuckhead (“There’s a deep subtext to this one”) and Bird Attack. For the most part the songs are trivial. But for a band whose guitarist plays gigs in a dress, and whose singer could probably trip over his dreads, that’s kind of expected. What it doesn’t do however, is take away from the blistering slabs of punk noise and longer, more melodic sections of skate-punk the band uphold, all with the humour you’ve come to expect from Aussie hippies. And their fans lap it up; flailing limbs and crowd-surfers obscuring our view far more than the support beams that threaten to kill anyone thrown in to one.

“We didn’t fly 25 hours just to hear a fucking Australian accent,” jokes singer Jay early on, before asking another audience member to reposition a spotlight. The lack of barrier at Soundcontrol is potentially its one redeeming feature, and tonight such a lack of barrier equates to a lack of boundaries between band and audience, like any good punk show should. It’s messy, it’s loud and it’s cathartic, and though often the tracks blur in to one other, occasionally interspersed with excellent patter (“This one’s for Mike TV, they’re known meth users!”) it’s still better than we could have hoped for, and after waiting roughly a decade to finally see them live, we’re not disappointed.

An encore is synonymous with live music, even if a band has played a terrible show, it’s almost certain that they’ll disappear for a couple of minutes, do a quick line or boost their quinoa levels depending on just how self-righteous they are, then appear back on stage to play their most recent single and their biggest hit. Not tonight, in typical Aussie fashion again, there’s no latent bullshit, just good natured humour (“Let’s pretend this is our encore” – “Wow, this encore’s dragging on”) and a fantastic close to an excellent set.