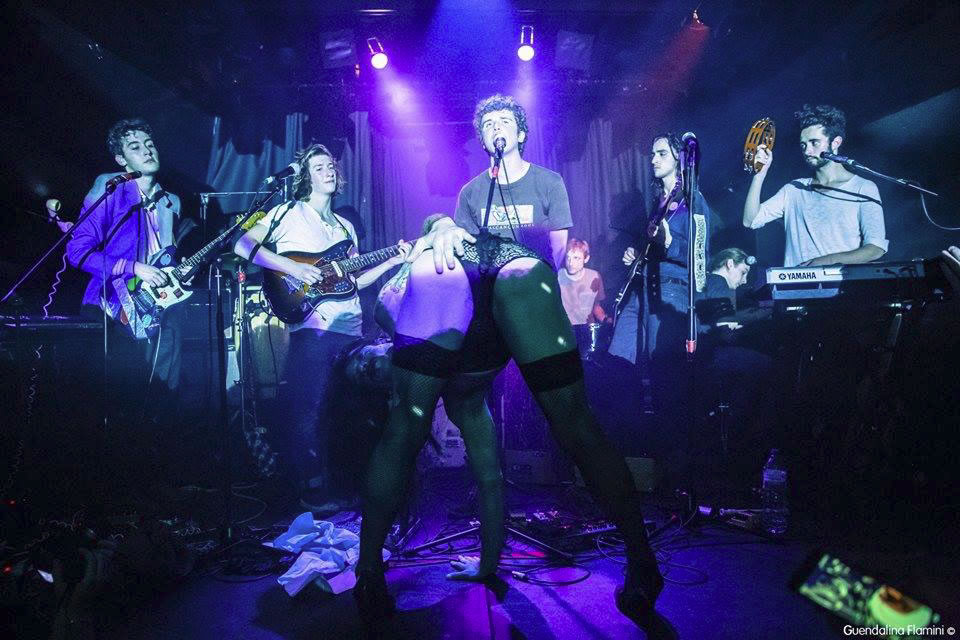 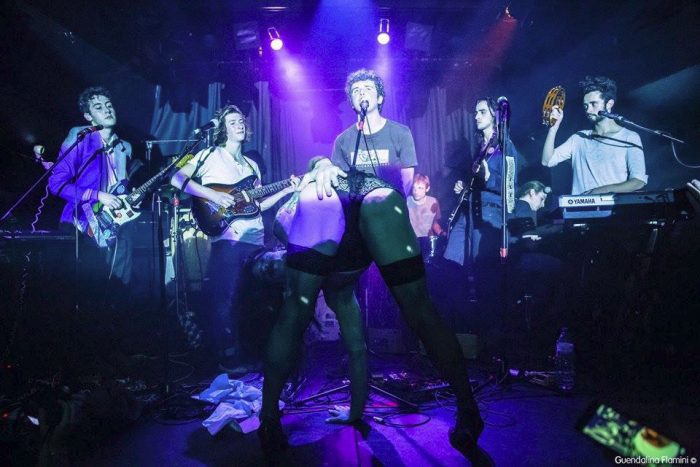 One warm evening in the port of La Rochelle I met Victor, a young Frenchman with black frizzy curls sitting on his head. He took my guitar and rapped out ‘Oh Lord’ by The Brian Jonestown Massacre, while five or six of his mates stood around clapping, singing, drumming, shouting. ‘Come to our house!’ he said. ‘We av a big house outside Paris where we are playing and making ze music all of the day!’

Some months later, there were nine Frenchmen and a girlfriend crashing on the floor of my East London flat, ahead of a hotly tipped show in Hackney Wick. I can’t pinpoint exactly where it turned upside down, but that’s what tends to happen when you’re around The Big Idea.

As much a social experiment in freedom of living as the seven-piece garage rock behemoth that they are, each evening The Big Idea emerge from the deepest of Parisian basements into their home, a bedrock of talent and haven of creativity. London appearances at the Amersham Arms and Hackney Wick’s clandestine hipster enclave, Grow, have sent word of this grand idea tingling on the lips of those in the know. Having already gone around France several times in their van, 2018 sees the La Rochelle-born, Parisian-based psych rock cabal embark upon English shores for their first full voyage of the land from where so much of their influence derives. On the precipice of the release of their third record in two years, Daytona!, I made my way to the outskirts of Paris to get lost in the shadows and corridors of their communal home.

Weary from travel, the fresh air hit me as I stepped out of the taxi onto a quiet residential avenue in Champigny-sur-Marne. The gate was broken, and scabby men with eyes on the house hung around the street. There’d been a party the day before- folks had been queuing to get into The Big Idea’s garage since noon. A tall young chap came out to meet me, with black frizzy curls sitting on his head.

‘Ello, we are glad you can join us! See this people standing ‘ere, they are ze silly ones! Come in let me show you our home!’

A visit to their live/work/party/study/write/record abode began with a whistle-stop tour of the premises: a communal living area, a bedroom converted into the temporary HQ of Meteor Shower Productions – the homegrown imprint set up to release and promote their records – and the various bedrooms where the seven members of the band – plus a constant coming and going of friends, associates and musicians – reside.

We went downstairs, scrambling for light switches and creaking on the steps. A stage was set up at the far end of the garage, with bits of drum kit and odd lights and wires strewn across the platform. This was the remnants of yesterday’s Cremafest – along with a mountain of wine bottles, coca-cola and cheap beer cans – the annual one-day garage bonanza that The Big Idea host across the floors and spaces of their home. Excited chatter and gleaming eyes told of the antics, too profane to repeat here. I wondered where they’d found the energy to get up and show me around.

In just two and a half years that these guys have been living and playing together, they’ve managed to bring out three records, tour the country twice, play a series of shows in London and host the second sold-out edition of a DIY festival celebrating the Parisian garage rock scene.  This can be put down to endless creativity and dedication to the power that seven people can have to push the boundaries of what a young band is capable of. Most bands I know struggle to organise a practice between four; The Big Idea have brought organisation into their natural cycle, freeing them up to spend time sharpening the brilliant corners of their sound.

They took me into the studio and turned on the lights. It’s a basement annexe divided through the middle into a practice studio and recording suite. This was where I’d be staying. Later on I saw them at work in there, hammering down the intricacies of a song that the drummer, Pierre, had written (I use the term drummer loosely – everyone here plays everything). It was to be one of the tunes on Daytona!, and they were going at it with a fine comb. ‘It’s easy to get lost in sound when there’s so many of us,’ they were telling me, ‘or lost in ideas. So when we work on something we don’t stop until it’s concrete – like the garage’.

The songs are playful and warm, but also irritable – troubled, even. They’re constantly juggling between these two sides of their sound; there are the young and angry punk rockers on one side, and the older, mellowed-out tripper bringing up the rear. Watching them play is an incredibly visceral sensation. Beatles, Stones and Zombies lurk in the corridors of their sound, but their lively brand of garage rock takes more cues from today’s cutting-edge psych-rockers like Thee Oh Sees and Pond.

After practice, the curtains are closed and the huit-six fizzes- the beer with the best cheapness/strength ratio in Champigny supermarket. ‘It’s about to get silly’, I’m told. Smoke fills the living room; cards stack the table. Freshly emptied wine bottles augment yesterday’s pile and a mad Breton runs between floors, his patriotic odes echoing through the house. It’s easy to place that signature playfulness you can hear in the music.

The Big Idea occupy a unique position far from the locus of Francophone psychedelia. Unlike contemporaries in the Parisian scene, they sing in English as a tongue-in-cheek nod to the golden age of British and American psych-pop. And unlike bands like Montreal’s Fly Pan Am, for example, they don’t engage purely in drawn-out, ‘verb-y landscapes, instead breaking up their grooves with unexpected garage-punk ripostes to the boring overindulgence of modern psychedelic guitar music  And, unlike all these bands, The Big Idea are yet to bring out a traditional ‘album’. All of their work is released in curveball formats; their second record, La Passion du Crime, came out as a quadruple CD that follows the course of a detective story on the streets of fin-de-siècle London. Every song name is a Roman numeral that doesn’t necessarily follow the logic that you learnt at school. Returning to find a particular song is a detective story in itself; you have to make your own way around the four-decker album. If you’re an irritable person then this might vex you, but in an age where the dominance of the LP is waning in the face of single streaming and ad-ridden, low-quality YouTube listening, it’s highly refreshing to see a band putting an original spin on the album format.

As the name betrays, taking on large concepts is their niche. The forthcoming third album, Daytona!, is another grand feat of record releasing, if only for the fact that work has already begun on the fourth. Before all that, though, we’ve got the summer, when The Big Idea will be bringing their well-oiled machine to UK shores for a series of exclusively upside-down shows. The French garage revival is one of the most exciting scenes for DIY guitar music as this decade draws to a close, and the seven horsemen of Champigny are leading the charge – don’t get left behind.

Daytona! Is released on digital and vinyl on the 11th April.