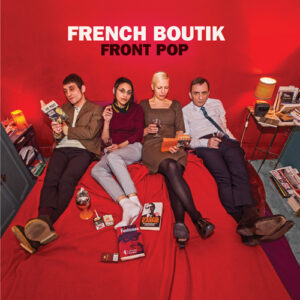 Sharp-as-you-like French Mod band, French Boutik have so far released 3 EPs, captured on the recently released The Essential album, so Front Pop is their actual debut album. Their ‘60s-drenched power pop is more than just a bit infectious. With lush vocals from chanteuse Gabriela mingling with glorious harmonies backed by Zelda (drums) and Serge (guitar), theirs is a bright sound, centring on the pop aspect of the Mod spectrum, with crashing chords, warm organ, chunky drums and the whole ‘60s poptastic shebang.

They sing mainly in French, apart from a couple of songs on this long player: Hitch a Ride and The Rent, the latter showing their more laidback style.

And they record for Detour Records, home of New Untouchables Mod organisation, creators of The Brighton Mod Weekender, Le Beat Bespoke Festival (which is also a mighty fine compilation series, also on Detour)

Front Pop by French Boutik is available on Amazon