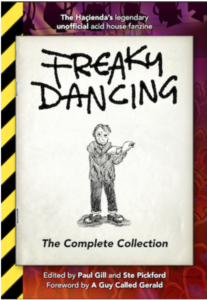 “The most important piece of journalism I’ve read in the last twenty years.” Tony Wilson on the Hacienda unofficial fanzine.

The Haçienda’s legendary unofficial acid house fanzine, Freaky Dancing, has been compiled into a complete anthology by The Quietus (TQLC) with a foreword written by A Guy Called Gerald and will be published physically & digitally on Thursday February 21.

Freaky Dancing was the unofficial Haçienda acid house fanzine. It ran for 11 issues between July 1989 and August 1990. The first eight issues were given out free to people in the queue to the club on a Friday night. Later issues were sold around Manchester and reached a peak circulation of 750. The fanzine was put together by Paul ‘Fish Kid’ Gill and Ste Pickford with help from their friends and Haçienda regulars. It was written and drawn during the week then printed out using the photocopier in Ste’s office after work on a Friday. The photocopier didn’t survive. During the fanzine’s lifespan the Haçienda became the most famous – and infamous – nightclub on earth. It was a year of incredible highs and dark lows. Ultimately the scene imploded in paranoia, shootings and way too many drugs. Freaky Dancing documented this journey from blissful optimism to inevitable self-destruction. Famous fans included Peter Hook of New Order, DJ Mike Pickering and Tony Wilson, who described it as, “The most important piece of journalism I’ve read in the last twenty years.”

The new 276 page anthology published by the Quietus on Thursday February 21 contains a foreword by Northern techno legend A Guy Called Gerald, all 11 volumes of the fanzine, The Highs Of Freaky Dancing, never seen before strips plus a scrapbook of sketches, reviews, flyers and photographs. It’s a potent capsule of a special time and place in all of its ragged psychedelic glory – essential for rave scholars and fans of DIY culture alike.

The anthology will be launched at Manchester’s Soup Kitchen on Saturday March 2 with a performance by the stunning Classical Uproar ensemble, playing acoustic versions of rave classics and a full DJ set by acid house master Suddi Raval of Hardcore Uproar. Anthology editors Paul Gill and Ste Pickford will be in conversation with John Doran of the Quietus and there will be a book signing.