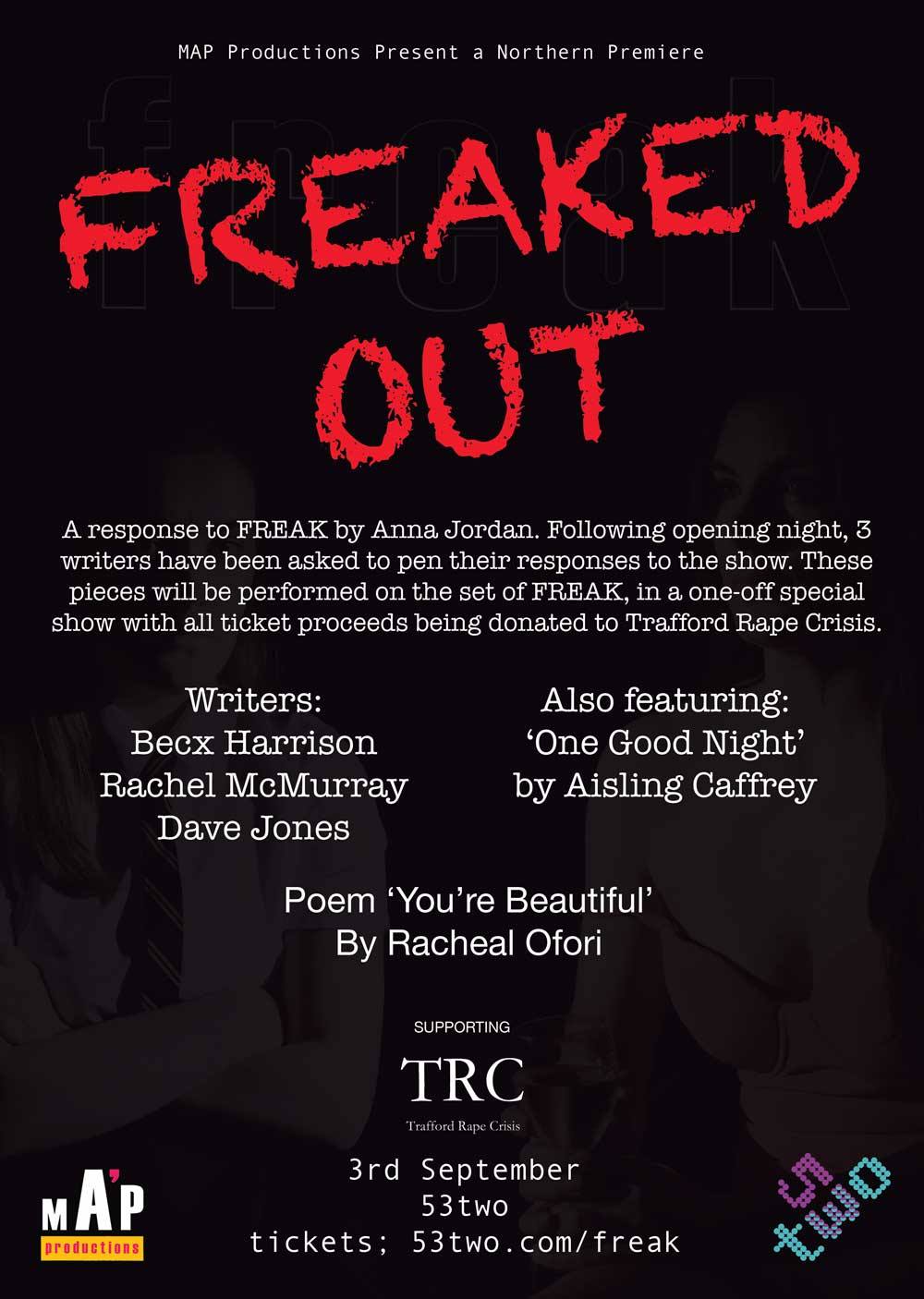 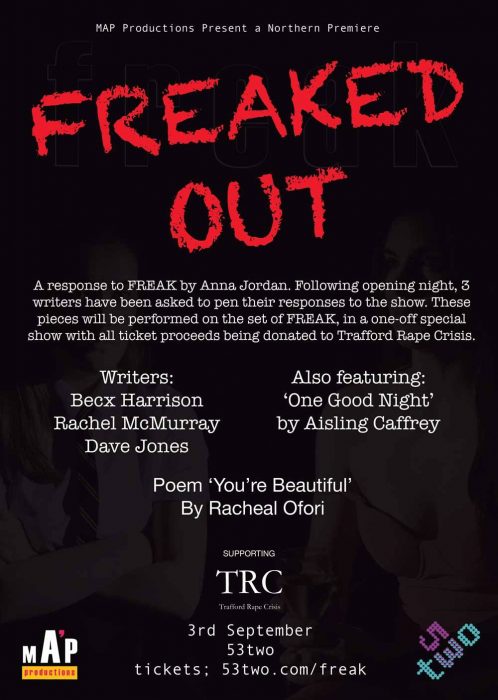 53two continues in its advancements as one of Manchester’s most innovative and thought-provoking arts spaces, under the arches near Deansgate-Castlefield. FREAKED OUT was a night of newly-written material along with spoken-word and a performance of the established play ‘One Good Night’, with all proceeds going to local charity Trafford Rape Crisis. Louder Than War’s Emily Oldfield went along to check it out…

Engagement with the creative space and its atmosphere is an essential in the city, and 53two shows that – as FREAKED OUT featured new writing resultant of three different writers/directors engaging with themes of the venue’s current play FREAK: written by Anna Jordan, exploring hard-hitting issues such as sex, power, feminism and body image.

The evening started with an introduction from 53two’s Artistic Director Simon Naylor who inspirationally emphasized the perspective-shifting qualities of a play like FREAK (which opened on Thursday 31 September – review here) – and its personal effect on him. There was also a speech from a representative of Trafford Rape Crisis.

The series of short plays written in creative response to FREAK started with ‘Zone of Comfort’ written by Dave Jones and starring Mary Gerardine Hooton as an apparently homeless woman sleeping on the streets of Manchester – Brenda.

‘Engaging in-your-face theatre at its best’

The contemporary context, coupled with Hooton’s intense conveyance of character – at points even looking individual audience members in the eye and approaching them in an utterly human challenge – indeed pushed viewers to the edge of their comfort zone. This single-actor soliloquy was profoundly paced and significant in its cyclical quality, opening and closing with the atmospheric mumble of ‘zone of comfort… comfort zone’. It invited us to reflect on our own sense of security, themes of perception and personal space.

Directed by Craig Sanders – ‘Zone of Comfort’ was an ideal opener for the evening, bringing the audience to their senses and showing how just a single actor, writer and director can collaborate to produce something compelling. Individual stories have massive merit and deserve to be respected and listened to: a key theme of the night.

Next was ‘Sexpectations’, a creative contrast containing skilfully interwoven wit and humour when considering the issue of the ideals placed on women in contemporary society – written and directed by Rachel McMurray. I particularly enjoyed the energy and animation which electrified both the content of the script and how it was conveyed – performed by the three actors Catherine Morefield, Danielle Emmerson and Sophie Giddens.

‘Different and insightful individuals in their own right…’

‘Sexpectations’ was refreshing as it took on the oft-restrictive notion that art considering female sexuality has to be ‘careful’ – a term often thrown in front of creative ambitions. All three actors made use both of movement and mimicry in their performances, using the space well to send a clear memorable message of how unrealistic many of the expectations placed upon women are.

Themes of sexual enjoyment, pornography, participation and personal freedom were explored and exposed in an upfront manner – with all three characters conveyed as very different and insightful individuals in their own right.

The final creative response was ‘The Heat Of The Summer’, directed by Chris Lawson and written by Becx Harrison. It was an impressively managed story which engaged insightfully with current affairs – the increased rate of acid attacks – as well as themes of jealousy, intensity and the complication of emotions behind relationships.

Creative direction from Chris Lawson allowed two intertwined stories to be conveyed separately between duos of characters on stage, whilst the audience was left to picture the culminating action for themselves. This allowed emotions to run high as the play followed a couple lying in the park enjoying each other’s company, but also the series of events as a jealous ex-boyfriend collects acid to target the new partner of his ex-lover in a fit of jealousy.

The jealous ex-boyfriend was played by Lewis Coleman, who skilfully sustained an exploration of one man’s plan but also a progressive, possessive anger: bot 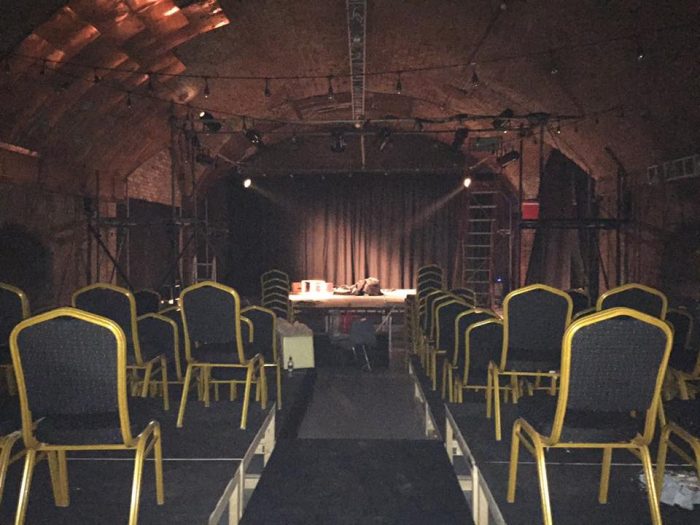 h compelling to watch and disturbing (but essential to consider). This was a skilful contrast against the warm and witty chemistry between the couple, acted by a frank and refreshing Zoey Barnes, along with Shaban Dar who showed the sweet idealism of young love in an engaging way.

The acting and writing strengths conveyed in this play also highlighted a talent for exploring love and life in an upfront manner, encountering all angles – including humour – with Jonathan Youl portraying the innocence and unfortunate pondering of the attacker’s brother who becomes an accidental accomplice. He provides the car, the means of getting to the attack-location of the park, when all he wanted as a Maccy D’s. This is a play which highlights that horrible situations can start from very typical scenarios – it is people’s feelings underneath which need to be discussed.

A well-timed interval allowed for reflection on this very varied and stimulating series of creative responses to FREAK which I think conveyed the themes of sexuality, power, control and expectation in a captivating – but never commanding – way. The audience have their own autonomy to decide.

A return to the theatre-space saw a poem ‘Beautiful’ by actor and performer Racheal Ofori up on the screen; a relaxed rumination which explored female beauty and feelings for the self with real rhythm. It added important uplift as we went into the final play of the night, thus well-co-ordinated amongst the array of material.

‘One Good Night’ is written by Aisling Caffrey and directed by Chris Lawson, providing a darkly comic delving into not just the background banter and conversation between three women living in the same neighbourhood, but exposing a concept oft-concealed that needs to be communicated: that many women have suffered incidents of rape that others are quick to dismiss or deny.

The play started with an audience member knocking a bottle over, a sound which had the play’s narrator Sean Chriscole, casting an atmospheric and utterly intense stare into the crowd. This in itself seemed to convey a fundamental point about this creative evening: that it was creative fuel for so many to take a long, hard look at ourselves and our views on sexualisation. The narration, with its warm wit and artful articulation, helped significantly with this engagement.

‘Take a long, hard look at ourselves…’

‘One Good Night’ explores Amelia’s story – how she initially covers over the concept that a man who she has slept with has gone on to rape her, before confronting it. Actor Francesca Waite gives real gravitas to conveying this character, upholding the fact that women can enjoy sex but simultaneously deserve respect. Verity Henry plays a ‘nosey neighbour’ type character with true Northern charm and bursts of brilliant, gutsy comedy with deep warmth underneath – whilst Kim Burnett embodies a more conservative character, keen for there not to be trouble. She manages this conflicted and seemingly socially-conditioned character with real sustenance. A play which invites us to consider consent, the definition of rape and the importance of speaking out.

What I have not mentioned so far is that the sheer majority of acting was script-in-hand, as the actors had just days to practice before performance. It was creative engagement at its rawest and most vital – and even though ‘One Good Night’ was performed sitting on chairs, this was not the resounding image, it did not detract from the creative stimulation. These were plays which made me picture scenarios in my head, pulling on my own life experience, inviting me to extend my perspective in a highly enlightening way.

This electrifying evening came to close with a spoken-word piece from Simon Naylor, which seemed to summarise, in a sense, what the series of plays offered as a learning experience. He embodied a blokish Northern perspective to consider feminism and to highlight how men could importantly engage with it too. After all, this was an immersive and insightful night for both men and women alike, leaving prejudices FREAKED OUT for sure and a real mood of progress in the place. Excellent.