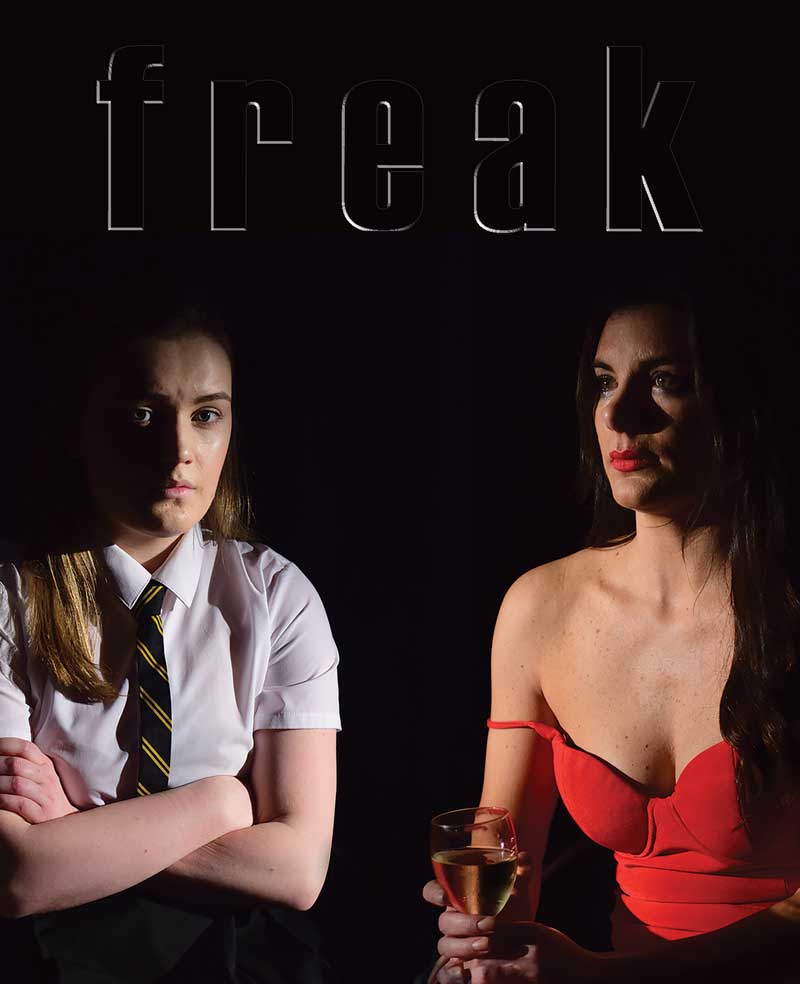 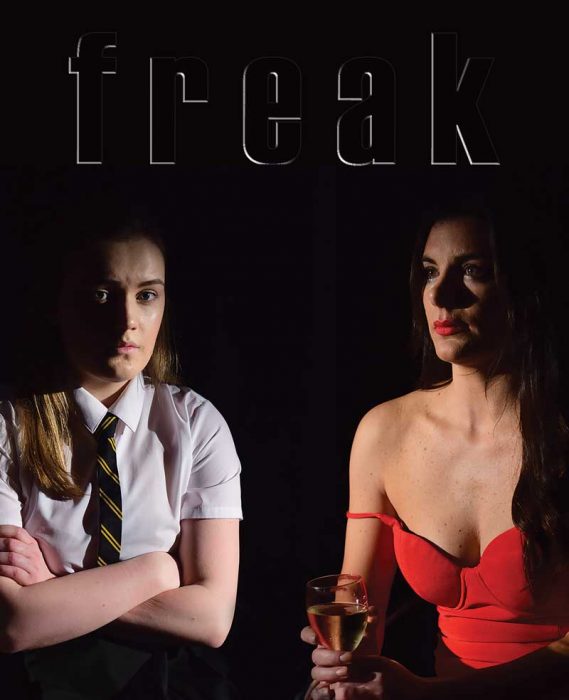 FREAK is a play which makes you have a long, hard think about sex. Louder Than War’s Emily Oldfield went to check it out on opening night…

Yes, it’s intense and revealing – but also has a surprising layer of reassurance to it, as two rather different women take to the stage to talk about their sex lives. They give voice to some thoughts and feelings we may have around themes that often go under-discussed, in a powerful performance lasting for an evocative hour.

From teasing to terrifying, it takes on content which had many of the audience members at the edge of their seats, as well as their comfort zones.

But that in itself is very much a significant point about FREAK. A type of performance that pushes you to question – why do I feel uncomfortable, why do I feel it a taboo to talk about certain topics? What makes somebody ‘daring’ or ‘different’?  Does my sex or sexuality ever make me a FREAK?

As director Simon Naylor mentions in the programme for the play, 10 years after the tragic death of Sophie Lancaster, it is crucial that people talk about self-expression and personal identity, and should not be ashamed of it.

This is a crucial contemporary play, presented by MAP Productions – performed in an innovative under-arch theatre space which gives a real feel of intensity and grit.

Written by Anna Jordan, this play puts us face to face with the perspective of women experimenting with their sexuality, two characters it seems society would teach us to stereotypically see in boxes – ‘naïve’ on the part of the young Leah aged about 15, and a ‘whore’ in the case of the older Georgie – who takes on a job as a stripper.

‘A blistering journey of self-destruction…’

Alexandra Maxwell creates an evocative character of Georgie, a woman at 30 years old seemingly struggling with the loss of men in her life; her boyfriend and her dad. But it’s so much more than that: this is a woman with her own tale to tell. Maxwell brings to life a blistering journey of self-destruction, which sees her character go from an articulate individual, to just ‘meat and holes’.

She hacks down the barrier of ‘politeness’ which so often prevents us encountering real life experience, and holds the role with a real conviction. An actor driven not just to occupy the stage, but to actively, intensely communicate.

It is the language used in the play which is provocative – there are no more actors than just the two on stage, no wild sex scenes – a clever directorial choice. Because the wildness is in the words and imagery in the minds of the audience. Part of what makes this play so powerfully uncomfortable as that it is in our own minds we do the guesswork, in our heads we see what’s happening. In turn, part of us knows we may well be guilty of certain things ourselves and need to change – casual sexism, body image shaming, judging people by what they do between the sheets.

And sheets are relevant in more ways than one. In a clever concept of set design, much of the action takes place over a big bed – with the two actors performing their own separate stories which we realise have more and more parallels as the play continues.

‘A brilliant blend of humour and heartache’

On the other side is Leah, a schoolgirl who Stacey Harcourt embodies so well with a brilliant mixture of intrigue and young over-excitement which is sustained throughout. I particularly liked how she captured the melodrama of teenage angst in a meaningful way, revealed through a brilliant blend of humour and heartache.

It emphasizes that there is so much variety when it comes to sex and experience of it – and as different as we all are, it’s a factor which influences us and needs discussing. Indeed, talking about it is often the first step to solving problems and the two characters eventually become part of each other’s story over the bed, in a way which certainly surprised me.

I appreciated the open, honest nature of the production – enjoying humour at the expense of Boris Johnson the unfortunate cat and stories of unfortunate waxing incidents, as well as moments of carefully crafted discomfort.

But why? Watching FREAK allows us to ponder this, to consider our perspective on what we find difficult to think through. On the opening night, I had nothin

g but respect for the two actors who handled a difficult theme with directness and drive.

‘The characters strip to their underwear on stage, dance and dream…’

Because that’s another powerful point about FREAK, as the characters strip to their underwear on stage, dance and dream – is that it is conveyed in a way which not does not make them objects in the eyes of the viewer, but empowered. This proves the direction from Simon Naylor not to be indulgent at all, and instead gracefully done. There are shows which make you blink, and shows which make you think. FREAK is the latter, it exposes and elaborates on important themes, rather than just providing a series of empty shocks.

It makes us question what is consent and what is corrupt, what is experimentation and what is actual. The resounding message – that it is what we are comfortable with in our own lives, which is important.

This is story of women and sexuality sure to be a powerful watch for audiences of all backgrounds. What may be additionally uncomfortable though is that the play does seem weighted with a ‘particular presentation’ of male sexuality, as both women have seemingly experienced being mistreated by men on the basis of sex.

But I believe the play is working at a deeper level and the presentation of sexuality does not work against it. How? The performance does not declare any of the actions or emotions felt as de facto wrong or right – these are peoples lived experiences and in turn it can be taken as a perspective provided by women, their insight. Therefore it would be unfair of them to represent male sexuality – they are conveying women’s experiences, and we can learn from them.

The acting is emotive and moulded to the mood of the audience on the night, something which is completely dependent on the situation and showed skill. Just another point which proves that FREAK is something important that you can – and should – very much be part of. Highly recommended, rousing and intense viewing.

Catch it while you can, on until 9 September at Manchester’s 53two – with more details here.