Home Music Freak Out The Squares : book review of Russell Senior’s account of... 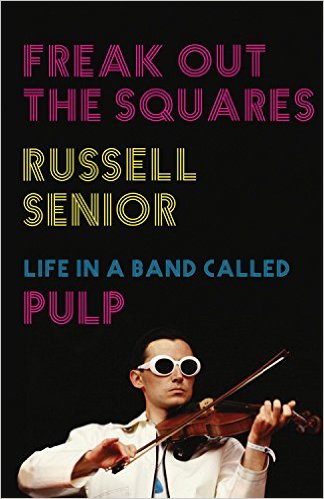 Freak Out The Squares

The tension between lead singer and guitarist often make for the best groups. So believes Russell Senior, the guitar and violin/bothering contrarian and wonderfully idiosyncratic foil to Jarvis Cocker (not exactly a ‘square’ himself) for almost 15 years in the long, unwieldy and ultimately redemptive stages of Pulp’s uncommon story. Freak Out The Squares depicts Russell’s unique personality as well as that of Pulp’s in nonchalant style. “We never tried to be weird. We just were weird’’ as he put it in a recent interview.

The short, zippy chapters and the jumping between the chronological telling of the original 1980’s to 90s period to the group’s 2011 reunion often via a smooth segue such as performances in the same venue twenty years apart make it comfortable reading even to the uninitiated.

Senior writes with great economy and barely a sentence wasted. The thought emerges that if he can write both pithy and witty as good as this, it truly is a pity that he didn’t add to the small collection of song-lyrics he penned for various 1980’s Pulp-incarnations. Being in the same group alongside someone recognised as one of the finest lyricists the UK has ever produced will, presumably, put the kibosh on that …

The creativity and energy of the young Russell Senior is evident with many colourful examples. When not attempting to book as many gigs for Pulp as he can, in the hope of stretching their presence outside of their native Sheffield, he’s at various points writing and putting on a Dadaist play, supporting striking local miners’ in their marches, using techniques from drama-workshops and psychology to aid song-writing and finding ever-more imaginative ways to dress the stage when Pulp play live. I found myself feeling a sense of inferiority reading this type of detail and ruminating on how the average person fails to make use of their imagination when set against many of these ideas done on a shoe-string all in the name of the aspirant becoming a star. Many music autobiographies reflect the artist as a lazy bastard whereas for Russell, like Patti Smith in her acclaimed ‘Just Kids’ memoir, well his ethos is summed-up eloquently at the end of one chapter, “Magic doesn’t just happen. People make it happen”.

The mid-80s see Pulp grasping for and failing miserably to transfer their rickety, cheaply-produced songs to the masses and this particular line-up falls apart during the making of a promo for the song “They Suffocate At Night”. Russell and Jarvis rush around like lunatics to find the best camera angles and props late into the night in a freezing Sheffield warehouse while the other three band members “refused to continue, climbed into the rafters and sat there, dangling their legs like three big sulky pigeons”.

A couple of years and false dawns later it finally seems that Pulp are to put themselves out of their own misery with a farewell concert at the band’s old stomping ground, The Leadmill. However, even this hurrah ends in disaster as all the carefully co-ordinated stage-deco (tin-foil, dry-ice, mannequins amongst other assorted objects) designed to entertain and immerse with the music come crashing all around the band who leave the stage to both the applause and laughter of the well-meaning crowd. The band feel dejected and Jarvis takes Russell to one side to admit he’s had enough and is off to London to study film at St Martin’s College. An impassioned plea by Russell for the band to persevere is really quite touching at this point particularly as he had become a father for the first time a day or two prior. He swears to concentrate less of his efforts on distractions such as stage- effects and more on playing his instruments. A sense of his drive for and belief in the band is at its strongest here and it becomes apparent that Pulp would not have survived into the 90’s glory days without him.

Tales of life on the road 2011 style are marked by the absence of other Pulp members. The ‘’Russ Buss’’ winds its way around Europe, consisting of Russell and a coterie of friends, roadies (who often get the best anecdotes throughout the book) and the odd family member. While this makes for an interesting contrast to the old days of all five band-members slogging around the country in a cramped Transit van, it does highlight the disappointment of missing updated reports on the group’s habits in their middle-age. Did drummer Nick Banks ever grow-out of blowing-up empty crisp packets and making them explode? As a result the book does feel more like a travelogue in these chapters. Senior treats the reunion as an opportunity for cultural enrichment while travelling between festivals, sometimes ducking-out of shows which have been booked close together and he makes no apologies for this, stating early-on in the book that his agreement to do the reunion was driven in no small part by a wish to spend longer in interesting places across the continent than a touring band is usually denied due to tight-scheduling.

When it comes to inter-band and Britpop scandal the author treads an understandable line between keeping things dignified (twenty plus years will do that!) yet still entertaining. So we are told of some late-night debauchery in France with Blur and Lush in 1991 – the night, to Russell’s mind, that Britpop started. One partner catches their other-half in the act with a third party and although no names are mentioned, the assumption is that two of the bands are involved (a clue may or may not lie in Blur’s Alex James’ assertion in Britpop tome The Last Party, that ‘’Pulp were in our knickers, devious little fuckers”) while the tale of how heroin destroyed the early ebullience of Elastica is treated carefully as Russell opines on how the brown powder is the most poisonous and least fun drug of all. There were no junkies in Pulp, he is quick to state but he also depicts how the touring environment makes such habits all too easy to pick-up through a tale of not succumbing to peer pressure when a line of coke is proffered to him around a table on a US tour.

Much of the other shenanigans is often played-out through a non-band fall-guy i.e the ubiquitous roadie called ‘’Rover’’ – an ever-changing character, whom Russell plays tricks on. Indeed through supporting bands a rung higher at the time such as St Etienne, or by dint of being on the same record label in the case of The Cranberries, Senior and Pulp-mate Nick play hilarious pranks with pop femmes du jour Sarah Cracknell and Dolores O’Riordan in-tow (though not, sadly, at the same time).

When the big-time does finally hit, Russell’s domestic life in Sheffield and his nights on band-related business in London (where most of the band are located at this point) and beyond are clearly at odds. Glastonbury ’95, when Pulp catapulted into the league of rock’n’pop greats, incredibly doesn’t feel like a good performance at all to Russell or the group until the lights from the stage settle on the crowd and the group finally see thousands and thousands of people go mental to Common People. For every exciting moment that this period provides the band, unsavoury incidents such as an attempted tabloid drugs-sting on Russell are never too far away. This culminates in the 1996 Brit Awards when Jarvis’ bum-wiggle makes the group tabloid fodder and the audiences, while getting bigger, also begin to mean less.

As the book nears the end we get a further, wonderful detour in the form of a trip to Eastern Europe in 1988. Russell’s unwavering attempts for the Pulp cause show no bounds as he’s searched by a stern Romanian official, carrying only a Pulp demo tape and some vegetable stock.

Indeed the further into 1996 we go the more the book skips back to 2011 and it’s clear that Russell’s weariness of being in Pulp post-Jackogate remains. The arena tour of that spring has faded from memory so little did it move or mean to him and we rapidly move from commentary on another long bus journey between festivals as the tourbus pulls into an umpteenth grey carpark in the rain to a hurried explanation of his departure from Pulp with little to no mention of the Mercury Prize win in September 1996 nor the final straw of the aborted writing sessions post-Different Class which produced Help The Aged and little else as the group struggled to know what to do once the hard- won success began to wear-off.

Knowing when it’s the right time to leave a cool party is a neat summation of his exit. The word “cool” crops up from time to time throughout this book, as if an importance on conventional wisdom matters. While this may be true on occasion, Senior risks doing himself and the group a dis-service of underselling the Pulp way – often cool but rarely knowingly so or rather, rarely in the conventional way.

Thankfully the anecdotes and descriptions in this book capture the essence of a unique group – freaks, misshapes and utterly enthralling.