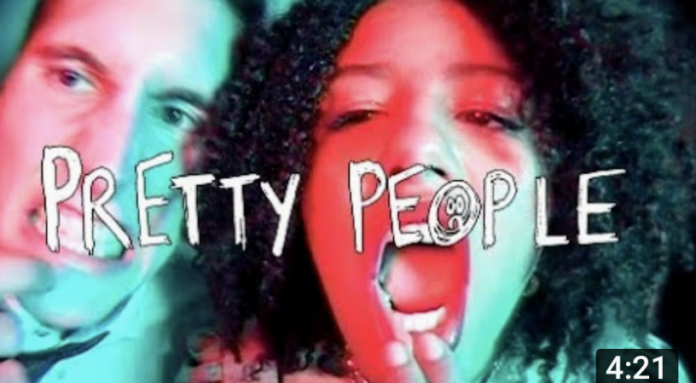 Or, as they put it in their own words: “This song is really a defiant ‘Fuck you’ to people who value appearance, status and online following as the only traits that give people worth. We think that feeling is all too frequent, but we refuse to let those people silence or hurt us.”

Fräulein are Joni Samuels (vocals, guitar) and Karsten van der Tol (drums) and Pretty People is a calling card for their strong signature style – minimalism with a message.

Inspired by Samuels’ experience at a fashion party, her lyrics excoriate a vacuous, hollow world where having the wrong look, or the wrong number of Insta followers, can lead to social exorcism.

The video emphasises the message, with the duo being constantly assailed by wandering hands and superficial props to impose an image on them, as they deliberately provoke mockery by smoking, drinking, picking their teeth, smearing their lipstick and, in a final flick of the finger, donning a jester’s hat.

Illustrating the truism that a whisper can wound as much as a scream, and a snide remark behind the back may hurt more than a slap in the face, Samuels delivers her kick against the pricks with a deceptively warm intimacy, welcoming us in with a warm embrace and a sweet smile… before applying the coup-de-grace with a fiery burst of electric guitar.

Originally from Northern Ireland and The Netherlands respectively, the duo formed in 2018 through a chance encounter at a friend’s jam night in Bristol. They were already building a reputation as a ferocious live act when lockdown shut down live music, having played some of London’s top indie venues like The Windmill in Brixton and The Old Blue Last in Shoreditch.

Impressively for a new band, they had begun receiving accolades in the music press on the strength of their demos alone, also using them to contribute to the conversation around race in the UK and supporting the Black Curriculum charity.

Still building and developing their sound, Fräulein hooked up with tastemaking London label Practise Music (Squid, Deep Tan) for the release of their first official single.  For recording, the band found themselves back in Bristol with Ben Auld (Canyon Sound studios), who brought his fascination with analogue recording techniques to Fräulein’s raw and rhythmic sound.

The crackling of the tape machine pairs wonderfully with the lo-fi garage guitar sound, creating a surprisingly rich sound for a band of just two musicians, helped by Caius Stockley-Young (King Nun) who helped engineer the vocal recording process, and mastering by legendary engineer Noel Summerville (The Clash, The White Stripes, My Bloody Valentine).

The arresting video was shot by Emma Swann, founding editor at DIY, and in keeping with the analogue techniques utilised on the track itself, the band chose to record the music video entirely to Mini DV tape.