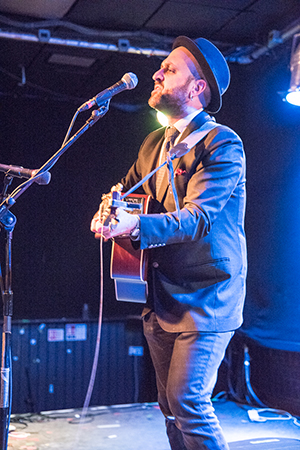 I first came across Franz Nicolay back in January of this year when I reviewed his latest album “To Us The Beautiful” and a very fine album it is.  I was thrilled to see that Franz Nicolay was in the UK for a series of 15 shows and one of those shows was fairly local to me at The Joiners in Southampton.  It is difficult to categorise Nicolay’s music as he draws from a range of styles but he has been part of Gypsy-Klezmer troupe Guignol.  Franz has worked with a wide range of artists from Frank Turner to The Dresden Dolls and between 200 -2010 he was part of Brooklyn based rock band The Hold Steady.

Franz Nicolay’s solo work, if you need to put a label on it falls into the sort of folk-punk end of the spectrum inhabited by the likes of Billy Bragg and Frank Turner’s solo work and his latest album was released on the same label as Turners work, Extra Mile Recordings.

The Joiners is something of a legendary venue and huge numbers of big name acts have played there on their way to becoming big stars.  Ed Sheeran, Enter Shikari, Muse the Levellers and Oasis are just a few of the bands that have played this little 150 capacity venue.

Situated in the St Mary’s district of Southampton The Joiners like the whole area has seen better days.  It looks a little neglected both inside and out and the lighting is terrible.  I must confess that arriving at the venue was something of a nerve racking experience.  There is parking just a short walk away but the car park was heavily populated by drunks and junkies and to be honest I was not prepared to park my car their.  Fortunately I managed to find a spot just outside a busy kebab shop just after the 8pm parking restrictions ended.  As we walked to the venue we saw that the street was littered with empty vodka bottles and even a few used needles.

We arrived at the venue just after 8pm and were expecting to find that support act John Shoe was already on stage but no.  As seems to be becoming the norm these days there were no less than four acts across the evening.  As a result it was 9.45 before Franz took the stage.  It seems to be the case these days that more and more headline acts are adopting this form of line-up, the consequence being that the headliner only plays for around an hour, sometimes even less.  This hacks me off, I go to gigs to see the headline act and not some kid who is playing because her aunty is the second cousin of the bloke who owns the venue.  I will concede that you do sometimes unearth a gem but you also hear a lot of dross. 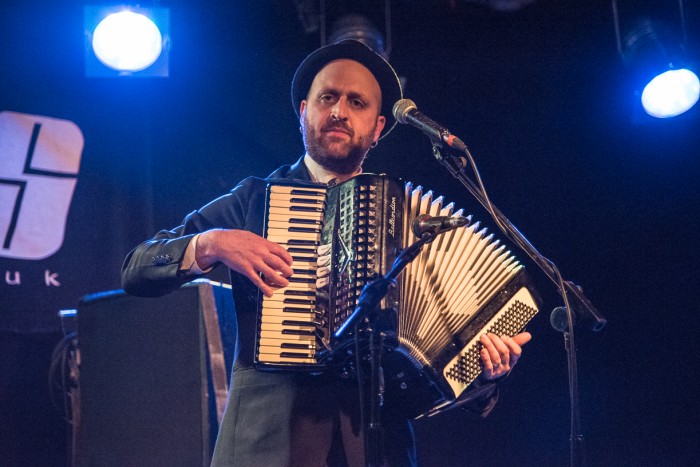 If you don’t know Franz Nicolay’s solo music he is a multi instrumentalist and during this show he accompanied himself on guitar, banjo and accordion, though obviously not all at the same time.  Franz opened the set with the opening track of his album “To Us The Beautiful”  and as you would expect we were treated to around half a dozen songs from the album with Marfa Lights, Shallow Water, Wrestlers and Bright White all getting a run out.

One of the things that impresses me about Franz Nicolay is the seamless way he shifts between instruments.  As an example when he broke a string during “The Hearts Of Boston” he finished the song, handed off his guitar for someone to replace the string, picked up his banjo and launched into “Shallow Water” no fuss, no flap, no drama.  The evening comedy moment came a little later in the set when Franz again broke a string during “Wrestler.” On this occasion he handed off the guitar and played “This Is Not A Pipe” on his banjo.  When his guitar was restrung he simply scratched his head, said “Now where was I?” and went back to where he had been in “Wrestler.”

It is also nice to see an artists ask the audience what they want to hear and then do his level best to play it.  On this occasion this included a cover of  The Sharp Things song “There Will Be Violins” though to be fair Franz Nicolay did release his modified version of the song back in 2007.

Franz Nicolay is an accomplished and engaging performer.  Modest and self-effacing he chats to the audience rather than at them and is happy to share a joke or wisecrack between songs.  There is no doubt in my mind that incredibly talented performer should be playing to much larger crowds than is the case at venues like the Joiners, but sadly it seems to be the case that talent counts for little in the music business these days. 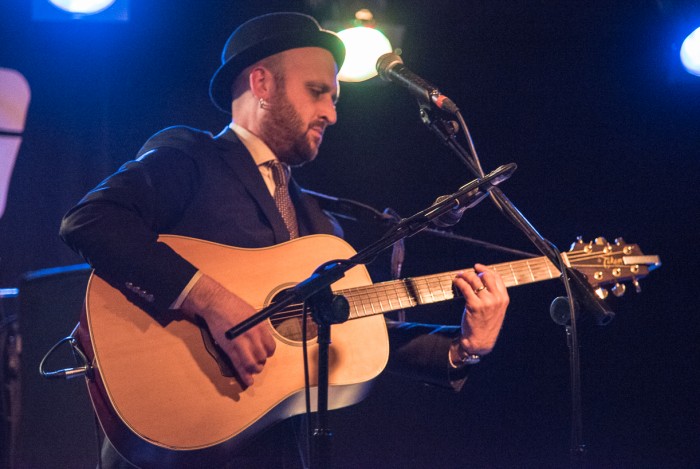 You have to commend The Joiners for putting on live music seven nights a week, but there are two other well known live venues within spitting distance.  The Brook and Talking Heads are both within a couple of miles and that doesn’t take account of the larger city centre venues.  Sadly this meant that on the night Franz Nicolay was playing to a crowd of about 60 people.  I always think it is a shame to see such a talented artist play to so few people, but to be fair to Franz Nicolay he still gave his all and put on an excellent performance.

We just have to be grateful that people like Franz Nicolay and venues like The Joiners find a way to keep their heads above water so that we can continue to listen to great music.  Lets just hope that they can both keep doing so for years to come.

Words and Photographs by Alan Ewart: you can follow Alan on Twitter at @soundofmysummer or on the internet at soundofsummer.org and you can read more posts by Alan at his Louder Than War author’s archive.