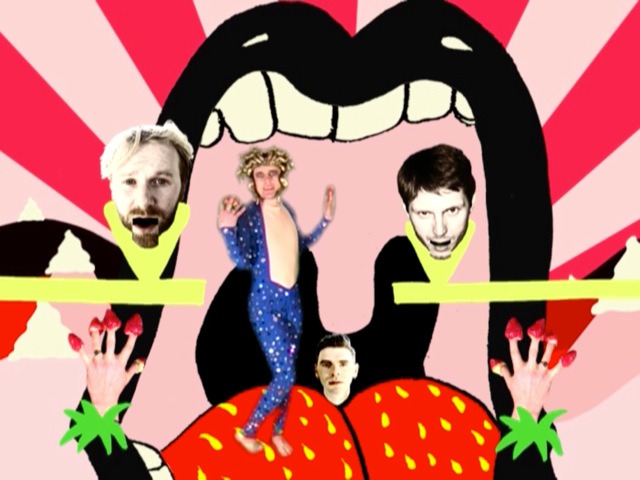 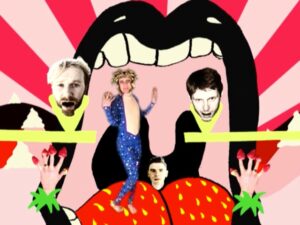 Fresh from releasing their much acclaimed fourth album, Right Thoughts, Right Words, Right Action, and with a new single, due out next week Franz Ferdinand have been on a UK tour, one which took in Manchester’s Academy a couple of weeks ago. Louder Than War’s Fergal Kinney was there for us.

What became of the class of 2004? Check any mid-market regional festival this summer and you’ll find Razorlight, flick to BBC1 on a Saturday night and there’s Ricky Wilson, his band the Kaiser Chiefs having just released an album with a title (‘Education, Education, Education & War’) that would have last bordered on relevance, well, in 2004. Whilst it’s true that the giddy post-Strokes guitar band boom produced more bargain bin fodder than you could shake a skinny tie at, last year’s ‘Right Thoughts, Right Words, Right Action’ was a long overdue reminder of the powers of that era’s more cerebral offerings. By some distance their best album in the decade since their Mercury Prize winning debut, this was a contemporary and relevant update on their original manifesto of ‘music for girls to dance to’, and contained an abundance of everything that made them so essential in the first place.

Franz Ferdinand have visibly been sorely missed by the sold out Manchester audience tonight, and it’s easy to see why. The visual attention to detail is striking; amplifiers covered by white sheet against a black and white backdrop as the band themselves stride onstage clad similarly in monochrome, guitarist Nick McCarthy dressed not unlike Evel Knievel. Alex Kapranos could have stepped straight out of the video for ‘Take Me Out’; still stick-thin and wonderfully androgynous with sweeping Bryan Ferry fringe and steely cheekbones. The audience tonight is split evenly between the over 40s and the under 20s; those who may well have caught Franz Ferdinand touchstones Gang of Four and Wire first time round and those too young to have even seen this band the first time round. Curiously, it’s the songs from their slightly anaemic third album ‘Tonight: Franz Ferdinand’ that stand out tonight, a renewed sense of purpose doing much to breath life into songs that a few years ago sounded overproduced and a little lacklustre. How wrong we were; ‘Ulysses’ is a slow burning odyssey waiting to erupt, whilst ‘Can’t Stop Feeling’ could be a great lost Human League single with Alex Kapranos shed of his guitar and purring from the edge of the stage over fizzing synths.

Often only a mere pencil moustache away from Sparks, Franz Ferdinand excel at a certain kind of dynamic pop that feels sorely absent in British music at the moment. For a band that arrived so fully formed as these, the extent that they’ve developed from their angular beginnings is impressive, now a tremendously accomplished act frighteningly adept at turning their hand to electro, disco or funk and often all in the same song. Guitarist Nick McCarthy is compulsively watchable, chopping furiously at a guitar just below the chin often in perfect unison with Kapranos, punctuated by the occasional scissor kick or leap atop of an amp. The finale of the woozily sinister ‘Outsiders’ sees all four of the band playing the same drum kit in darkness and, far from signalling a mass exodus to the bar, has the audience transfixed. ‘Brief Encounters’ from their most recent album showcases Kapranos’ under-heralded skill as a songwriter, a voyeuristic peephole look at suburban swinging with a Ray Davies fascination/revulsion at middle class convention. Equally, the sublime ‘Stand on the Horizon’ may well be one of the best things this band has ever done, collapsing into a gorgeous a-cappella climax.

‘Take Me Out’ stands amongst the most perfect pop moments of the 21st century and, not for the first time tonight, incites not just a mass springboard of pogo-ing but a swell of circle-pits and genuine frenzy. Indeed, almost every other song is a reminder of just how many great singles Franz Ferdinand have amassed in their time, ‘Do You Want To?’ ‘Michael’ ‘Dark of the Matinee’ and the thrillingly angular ‘This Fire’ all present and correct. In the not too distant future, Franz Ferdinand will be treated with the reverence they deserve, but tonight they seem perfectly content with having the 2000 strong Manchester audience in the palm of their hand. Thoughtful, playful and never averse to experimentation, this is a genuinely great British band perhaps at their peak.