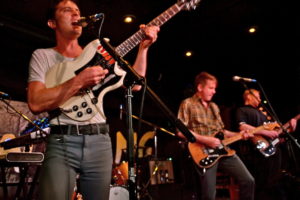 We would have loved to have seen PINS open up the second day of the 6music festival but didn’t realise that they were on so damn early. Whilst one of the best new bands in Manchester were dealing a typically fierce set in the Victoria Warehouse we were at the in conversation part of the event in the adjoining hotel where we saw a great chat with Peter Hook who seems to be able to deliver a brilliant interview no matter what he gets asked and an inspiring in conversation between Don Letts and Viv Albertine with Viv talking about her upcoming autobiography and making an impassioned stand for women musicians-it was electrifying stuff.

The live festival is a great reflection of 6music’s commitment to indie guitar music with its staple diet of indie bands making up the backbone of the event-of course we are not going to be seeing a Sunn O))) skulking noisily in the middle of the party or any rock or noisy stuff or anything that wavers from the world of indie but you cant have everything and at least there is a radio station that plays indie leaving radio one to wallow in celeb soundtrack.

The highlights this evening are a rousing set from jake Bugg who arrives complete with a band and plays a raucous set of trad rock like a teenage Bob Dylan with his songs of growing up in broken Britain striking a chord with a new generation. It’s great to see him at number one in the charts and 6music’s support has been instrumental in this. In the two years since we first saw him he has become an assured and powerful performer and tonight was a triumph.

It’s been a hundred years since Gravelo Princep assassinated the Archduke Franz Ferdinand and sparked the first world war — it’s one of the key flash points in history and one that the band are keen to avoid- preferring to refer to themselves as a pop band and not a political band- of course their name was never intended as a political gesture- afterall the band were named after a racehorse that was named after an historical figure but its still an interesting tie in with the 100th anniversary of the ‘great’ war looming upon us.

Tonight Franz are on great form- they are very much the modern pop band but a very good one- they retain the spikyness of their roots in such great bands like the Fire Engines and of course, the Monochrome Set- the genius band from the punk era whose dark, jazzy, guitar songs dripped melody and a sly humour and created the template for Franz to exist in.

Of course they have taken it on their own journey and their innate intelligence and brilliance with great hooks aligned to a frisky energy and muscular power makes them a thrilling live propostion. Alex Kaprikanos is a charismatic presence, strutting the stage with his guitar and has learned a few crowd baiting tricks from their years on the worldwide festival circuit- there is no sign of the boring introvert cool of other Brit indie bands and the lean mean touring machine that has appeared in its place makes the whole gig experience fun, albeit wonky fun, with a neat cross between pop perfection and those fetid and angular underground roots in the great Glasgow underground scene.