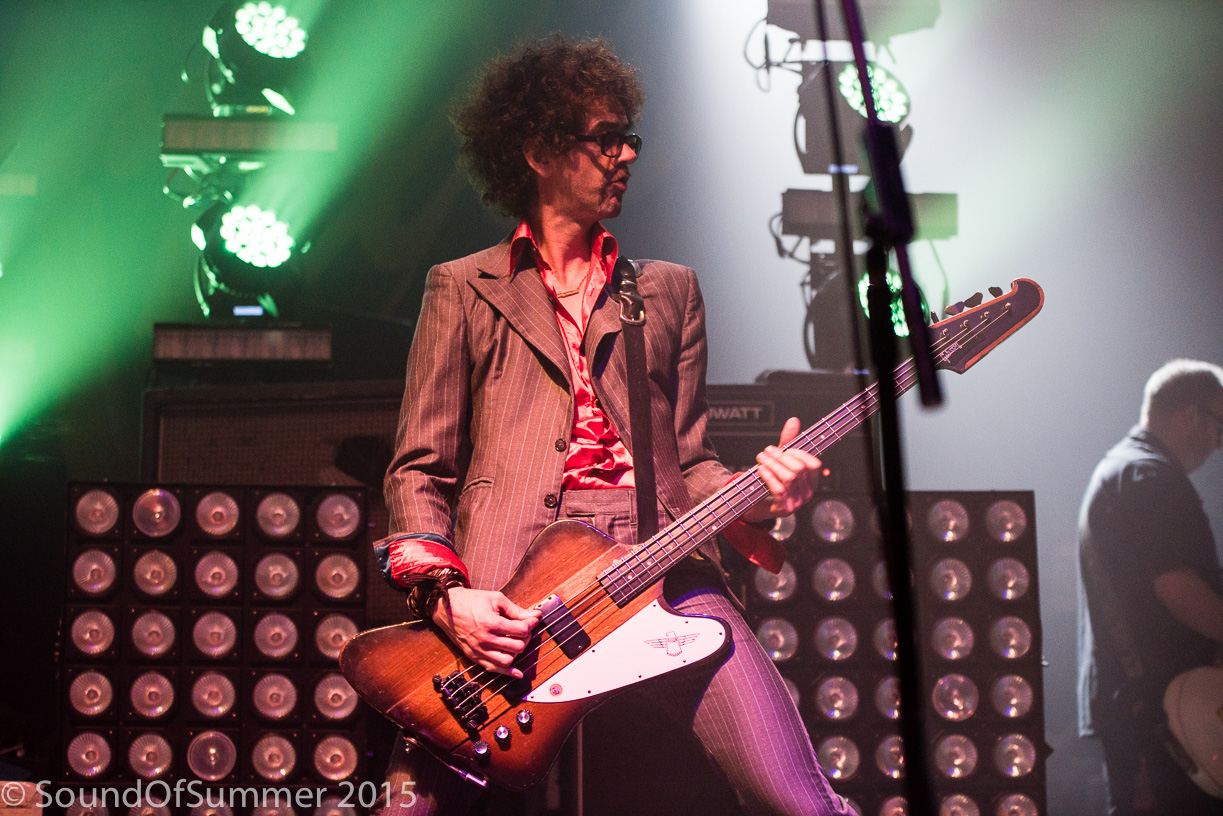 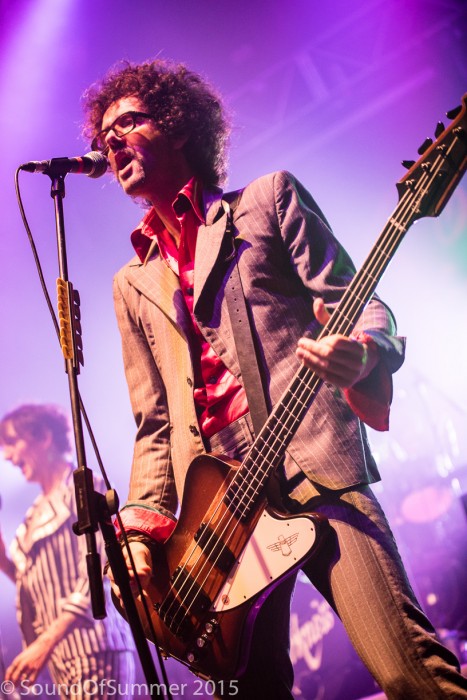 Through the 15-years of their existence the Darkness have been through the mill but since reforming in 2012 they have released two excellent albums and 2015’s offering “Last Of Our Kind” is their most personal and arguably their strongest album to date.  I caught up with bass player Frankie before the Darkness’s recent gig in Bournemouth to chat about the bands renaissance, the recent tour and what makes the band tick.

When I caught up with Frankie the Darkness had just been through the toughest few days of the tour with a run of back to back shows and after a gig the previous evening they had a 4 a.m. start to make an appearance on Chris Evans Breakfast show. The rest of the boys were trying to catch a couple of house kip before the show but, fresh from the shower Frankie was in talkative mood.

Frankie told me, “it’s been a great tour, a lot of the gigs have sold out so it’s been very successful. We are looking forward to tonight, this is a lovely venue, all the worn wood on the stage, I just love that, it’s beautiful.”

I started out by asking Frankie what impact Justin quitting the Darkness back in 2006 had on him. Frankie emphasised that he wasn’t in the band at that point because they had creative differences during the making of the second album but he went on to say:

“Watching from afar I wasn’t surprised.  I think it was inevitable.  When your purpose is to create joy and create a euphoria it is difficult, it can be very draining and it can lead to excess. Whilst we are not influenced directly by the like of Little Richard we try to create the same sort of vibe, it’s almost a madness, it’s rock and roll.”

I asked about the Darkness’ image, I was intrigued to know if the Glam Rock image and onstage flamboyance was contrived or simply a manifestation of the members personalities.

“I think it’s both, primarily it’s about our personalities.  We know each other very well, it’s like a family.  We are all a little idiosyncratic and whilst I don’t like to make generalisations Justin fits the profile of the exhibitionist lead singer.  We are constantly evolving and full of contradictions, even in our relationships with each other.  We were talking with Chris Evans this morning about the idea of being on the same wavelength as someone.” 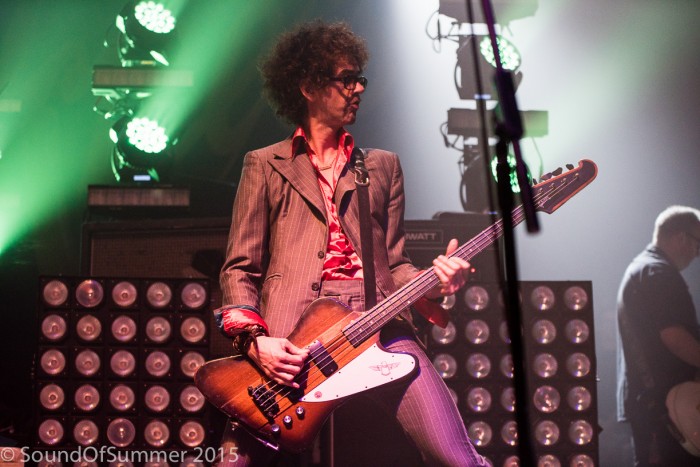 I suggested that for a band to really work there has to be a connection between band members when they play and the listener has to connect with the music.

Frankie agreed saying, “yes absolutely.  That’s why super-groups rarely work.  People say ‘this is my dream line-up but there is no real connection there.  You can almost call it the Ringo syndrome.  His drumming had a sloppiness about it and it’s only really now that people realise that was part of his make-up as a drummer and a person and it balanced the other guys out.  Justin has an intuition that allows him to connect with the crowd.  He can judge the mood of the crowd and almost never makes a false move.  You can feel the electricity from him when he is switched on, you can feel the vibrations.”

I commented that the Darkness have never been a band to conform to what is going on elsewhere and wanted to know if that was a plan or more about artistic integrity.

Frankie says “a lot of the time it is sheer bloody mindedness, we go where other bands fear to tread and occasionally it lapses into plain bad taste.  When we are at our best we take something bad and make it good.  We add a sense of joy that comes from our sheer enjoyment of it.”

I asked Frankie what had brought the Nordic mythology theme to the latest album.

“I guess the last album was escapist.  It was a difficult time for us.  We had to haul ourselves away, there were problems with Ed our drummer and conflicts between our English and American management teams.  During the comeback they made some wrong moves that put us in a difficult situation and made life tough for us.  We were on the wrong labels and after being out of the game for five or six years everything had changed.  We wanted to put things right so Justin myself and Dan sat down and really focused.  Barbarians and Running Waters were about delving into history but it is very ‘now’ we felt it could be very powerful.  Barbarians is probably the most powerful track we have ever released while Running Waters is probably our most serious track ever.”

“Dan wanted to get some proper riffs onto this album and he really did that on those tracks, we think they are the best tracks on the album.” 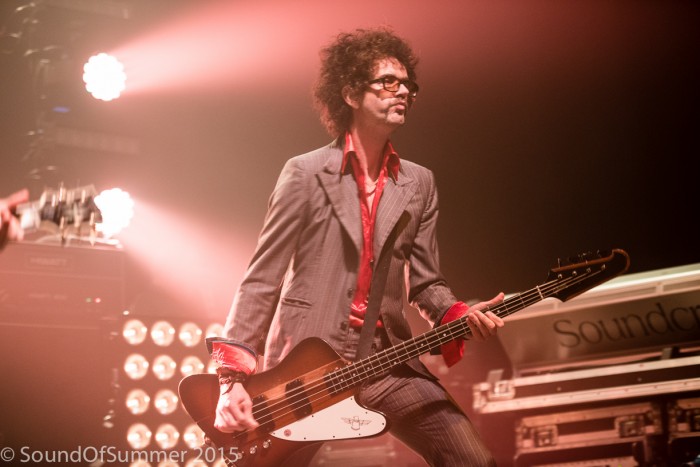 At Download festival this year the Darkness had made their entry to the stage through the crowd whilst flanked by a phalanx of Viking Warriors.  I was keen to know where they had come up with the idea for that.

Frankie said “man I am so glad we did that it was so much fun.  We weren’t sure about the secret gig idea but it was 30 deep on outside the tent it was one of the best decisions we made.  We lay challenges for each other and it really worked, like on the album Justin sang in character on ‘Open Fire,’. Dan’s challenge was to produce the album and mine was to sing lead vocal on a song.”

“We also freshened up our wardrobe.  The classic rock wardrobe is all black with crucifixes and so on.  Bono says ‘all the best bands dress in black,’  It’s like a rule.  Who needs rules, especially coming from Bono. It’s bullshit, it’s about breaking rules.”

“We worked with Ray Brown, an Australian designer who worked with Motley Crue, Muse and Arctic Monkeys, we drive him mad  because we all want a different look.  It’s always chaos when we go into his studio, we constantly change our minds.  Lighting wise we have changed everything so we are really happy with where we are and Rufus Taylor has brought something extra to the band, there is a real power from the rhythym section.”

I put it to Frankie that “Last Of Our Kind” was the Darkness’s most personal album to date. Frankie agreed saying that he thought their individual personalities came through on this release.  I suggested that it must be really gratifying to find that the album had received rave reviews.

Frankie said, “yes of course everyone liked it except for the Times.  We are very proud of it but we are already looking forward to the next one.  For the first time we are just having a year between albums instead of the usual three years.  We are going to try to capture something rawer and more spontaneous and more playful.  We can do that with Rufus he’s very interactive and we are feeding off his youth and instincts which is new to us.” 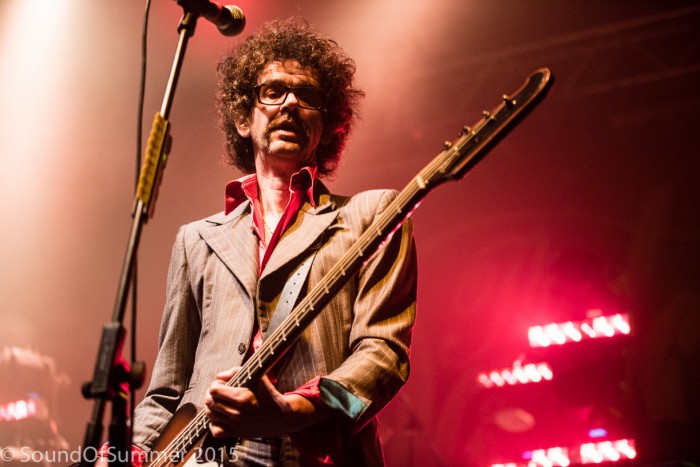 Frankie went on to explain that the partnership between their own label and Cobolt was really working well because they are very good on the digital side of things and are very forward thinking.

“The digital side of things makes it a great time to be an independent band.  We are really enjoying being a cult band, the Darkness army keeps coming back to gigs and helped us win the video awards on live wire, it’s really nice to have that kind of support.  The digital world has helped us to enjoy more loyalty than we ever had before so things are not always as they seem.  It is empowering and allows you to be more in control which is some compensation for not earning as much from your releases.”

You get the feeling that the Darkness have slayed their demons and are enjoying being back in the creative groove. It seems that there will be more to come from one of the most creative, enjoyable and fun bands on the circuit.  Long may they continue to entertain and confound us.