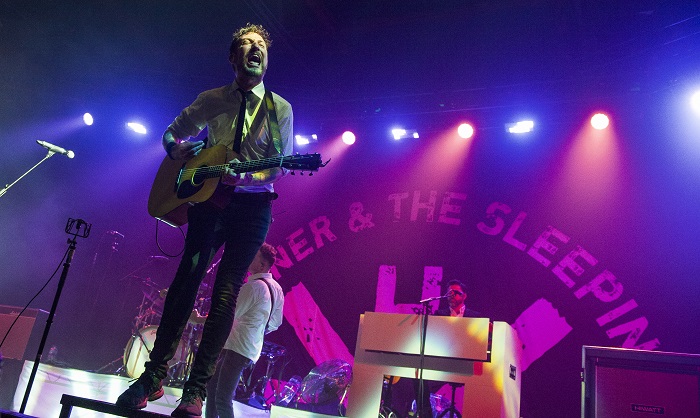 We watch Frank Turner’s first night of a two night stand as he adds another Manchester venue to the growing list on show #2301.

Less than a year since his last Manchester appearance and the release of be Be More Kind, time seems to have moved swiftly onto another round of touring for a musician whose work ethic continues to push the needle into the red.

Yes he’s still being more kind. He has a new EP – Don’t Worry – on the shelves or the digital equivalent that includes a typically Frank track in  Bar Staff although its brass infusions might be lacking in live performance, being stripped back to solo acoustic and the input of Toronto based community charity Choir! Choir! Choir! He may have extended the musical pallet in the studio, but live, the Sleeping Souls are still the quartet he turns to for the full on, fire in the belly live experience. The stage set is akin to a electrified pinball machine as Frank and his wingmen bounce round amidst flashing lights and the front of stage platforms and drum riser give the added bonus of making the set work from him like a small scale parkour playground. 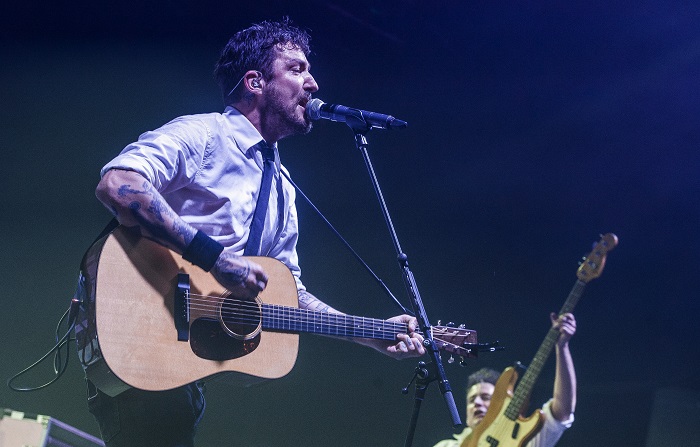 So show number #2301 (#2300 had been ticked off earlier in the day at Stockport hat Museum…) delivered with the big production features of backdrops and pyro flames (yes – not quite on a par with Rammstein but certainly something to add an extra touch of warmth)  giving way to the mid show acoustic set as Frank switched between the hard punk/pop rocking band leader from the frenetic  Out Of Breath show opener to  acoustic troubadour section. The ultra reliable set Turner anthems rolled on like a tsunami with each and every word belted back with gusto from a rabid audience that extended back beyond the main space and into the bar area for those who needed some respite from the chock-full intensity.

Earlier arrivals keen or a place at the barrier will have witnessed Jimmy Eat World’s punky power pop upping  the energy pre-Frank, but proving that less can be more, the resonating songs of Grace Petrie, blasting out Farewell To Welfare and a more gentle You Build A Wall (“you build a wall, we’ll build a bridge”) might have struck a more relevant and pertinent chord. But for FT, 2019 signals another year and the philosophy of start as you mean to go on – his Lost Evenings project heads to  the USA and another book is about to hit the streets. As Dylan once said, keep on keepin’ on.