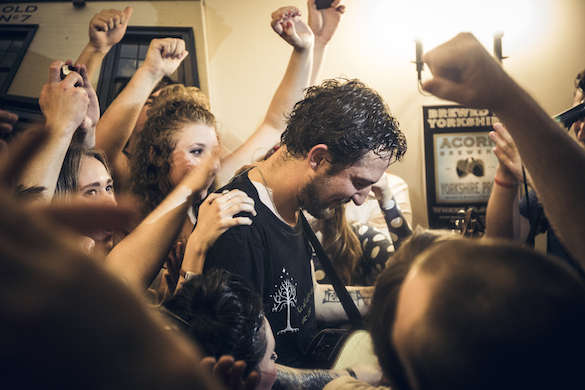 The Old No.7, Barnsley

Jason White, from Barnsley’s “only magazine website and online forum for musicians, artists, designers, facilitators and those venues promoting the arts in Barnsley” caught Frank Turner’s recent secret gig in the town. With reviews of gigs in Barnsley being about as rare as the gigs are (to quote Jason himself) he thought it merited being sent to us.

It was Thursday morning when I saw a fleeting glimpse of a mention of Frank Turner and Barnsley in the same update on Facebook. I skimmed past, it getting lost somewhere on my Facebook wall too full of ads and ice bucket challenge videos. Then at lunch time someone messaged me asking if I knew anything about Frank Turner playing Barnsley. My ears pricked. I checked the @FrankTurner twitter and indeed, it was confirmed that he was on his way to Barnsley for a secret gig. Twitter and Facebook suddenly went apeshit.

I announced the news on Facebook and pinged off a couple of messages warning people to keep their evenings clear and a couple more trying to find out where the venue would be.

I soon found out that my local pub The Old No7, Barnsley’s award winning real-ale pub, was to be tiny venue that would be used for the gig. The cellar bar, which is the room normally used for gigs, only has a capacity of 60 or 70. Shit, I though, better get there early. I set of to town, but not before quickly emailing his PR agency hoping for the chance to get an interview.

I was extremely lucky that it was my day off work and was able to get down to my local for 4pm to check out exactly what was happening. I found out that the gig was to be free entry with bucket donations to a local charity, first come first served entry. Also that it had been organised by Kerrang journalist Ian Winwood, who is originally a Barnsley lad. There was already cluster of fans tabled and ready and it turned out that the main ground floor bar would be closed off and used for the gig instead of the usual cellar. I got my hand stamped, bucketed by donation and went off to get some food. 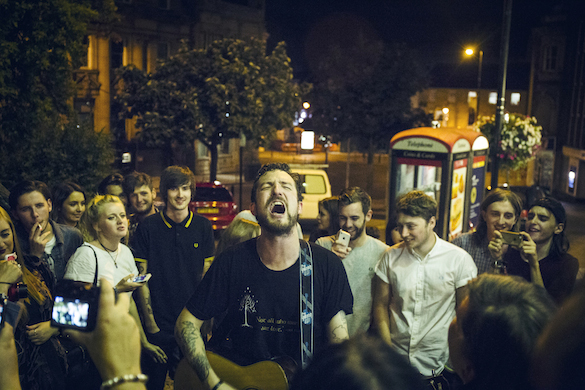 I returned at half five with Roseanna and grabbed a pint just as my email was returned granting me an interview with Frank. Already in the pub was members of The Bar-Steward Sons Of Val Doonican and The Hurriers and half an hour later, local lads Nu-Tek Sound setting up PA next to the front windows, members of Yellow Elevators, Burn Down The Disco and close to a hundred music lovers, both local and from around the region. It was around half six when I heard that the venue was at capacity. It had turned into one big hot sweat bucket and the atmosphere was amazing. Bouncers turning away those still turning up to the venue, hoping to get in – allegedly queuing all the way up Marketing Hill and onto Shambles Street.

Patrons ready, up first was support act, Morecambe singer-songwriter Joe McCorriston, in what he described to me afterwards as the gig of his life. Seeing what he could, from the corner of the room, running up the ground floor, up the steps and up to the raised bar area, the audience looked like a wave of pink faces faces, up for it and raring to go.

Okay, so we didn’t know Joe or his songs, but they were catchy and upbeat as hell, clearly influenced by the likes of Frank and the unexpected cover of Basket Case, with Frank on backing vocals, led to a massive singalong the likes this venue had never seen or heard before. I rushed downstairs after the set to interview both Frank and Joe still absolutely buzzing upstairs. It was indeed the gig of a lifetime for an unknown performer visiting a new town. Fifteen minutes passed before Frank took to the stage.

When he got to his corner (not a stage) of the pub, and strapped on his guitar, the audience had moved nearer, swelling around him without enough room for him to swing a metaphorical cat. The audience chants FRANK FRANK FRANK, as he launches straight into England Keep My Bones and then right into a raucous, Celtic tinged Let’s Try This At Home. And its only after three songs in and another singalong, Losing Days from his last album Tape Deck Heart, does he speak. Him explaining that it’s obviously his first gig in Barnsley was greeted by terrace sized chants of BARNSLEY BARNSLEY that would do Oakwell proud. He introduced us to Ian who organised the gig, which was also followed by chants of IAN IAN. There is no better welcome.

He sings Wessex Boy, as song about his hometown and hometowns everywhere, Plain Sailing Weather is about losing at love and The Real Damage about friends making even shit situations worth living.

Crowd surfing is something I’d never see in the bar of The Old No7, feet on the ceiling and the risk of bringing down the lighting made it look like the bouncers might have to intervene. There was nowhere for a crowdsurfers feet to land other than Frank’s face. He tells everyone to look out for each other and be careful. The audience listens, guiding the surfers back up to the bar. 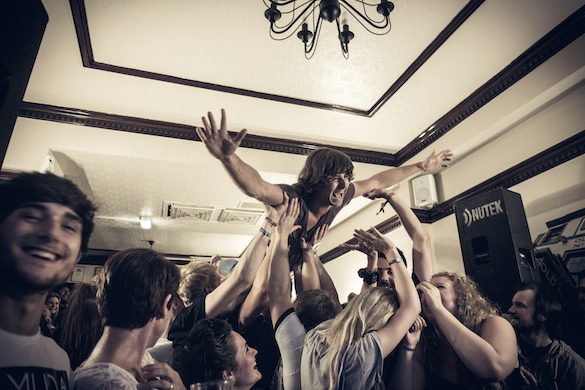 The vocals from the crowd is deafening on The Road and Peggy Sang The Blues. He turns to the windows and gets everyone to give those outside a big cheers. They go mental

Frank gives us the choice of hearing a new song about weather or tennis. Tennis gets the most cheers and he plays Love Forty Down. He then introduces us to a woman in the audience called Aaron, who’d got on a plane from New York that morning when she found out about the gig. Traveling 40,000 miles, she ended up in London and then traveled to Barnsley. She got a Barnsley cheer too. We’re friendly up north see?

Back In The Day brings chants of We’re Miners United, We’ll Never Be Defeated and fan favourite, Long Live The Queen reduces the room to tears.

An encore of I Still Believe sees a guitar string snap and Joe McCorriston legs it downstairs to bring Frank his guitar. Frank encourages the audience to bring the house down with screams while his guitar swap goes unnoticed. He ends with his old classic Photosynthesis before he steps outside to treat them faces up against the window to one final totally unplugged number. And every single person leaves totally overwhelmed and very happy.

Frank’s songs are love songs. There are no politics here, no matter how much Barnsley might have like to have heard his When Thatcher Fucked The Kids. His songs talk of towns, people, memories, winning and losing. A yearning for what was and what could be.

The songs of his southern hometown are swamped in nostalgia and despite the 200 miles between Barnsley and Wessex, we felt a sense of belonging and pride when those songs were sung.

Not since QPR’s win against Barnsley last May did a southerner bring so many tears to so many red eyes. It was emotional and an absolute fucking joy, and this gig will go down in Barnsley’s musical mythology as one you’d wish you’d been to and one you’ll never forget if you were.

Joe McCorriston is on Facebook and BandCamp and tweets as @joemccorriston

All words by Jason White, all photos by Roseanna Hanson. This is Jason’s first piece of writing for Louder Than War. More by Jason can be found on these links tho: alternativebarnsley.com, Facebook and Twitter: @altbarnsley.